Virginia boy, 17, is charged with shooting dead his mother, 34, and six-year-old brother at home before opening fire on his father, leaving him critically injured 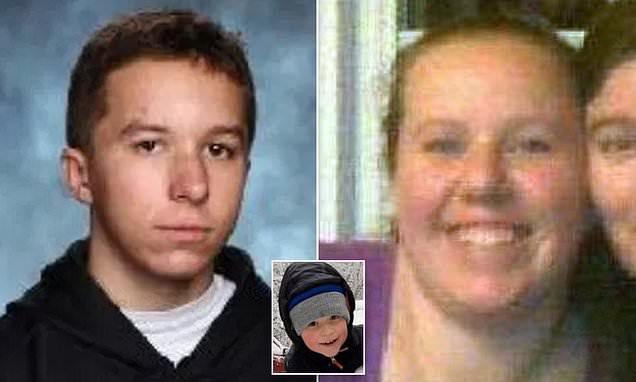 Boy, 17, is charged with shooting dead his mother and young brother

Leviathan 'Levi' Henry Norwood was apprehended on Saturday when store…

A 17-year-old boy suspected of fatally shooting his mother and his six-year-old brother in their Virginia home has been arrested in North Carolina, authorities said.

Leviathan ‘Levi’ Henry Norwood was apprehended on Saturday when store employees called police to report him as a possible shoplifter.

A massive manhunt for Norwood had been in effect since Friday night, when his father Josh, 37, returned to their home in Midland, Virginia to find his 34-year-old wife Jen and their six-year-old son Wyatt shot dead.

Norwood shot and wounded his father, who escaped and called for help, according to the Fauquier County Sheriff’s Office. The father was in stable condition at a hospital.

Police responded to the rural home, which is surrounded by forest, and found that Norwood had apparently fled.

Law enforcement officers initially believed Norwood had barricaded himself inside the family’s home but didn’t find him in there when they entered the residence after trying to make contact with him for several hours.

A dragnet was launched, including police drones and bloodhounds.

Midland is about 53 miles southwest of Washington, D.C. Sheriff´s deputies blocked off roads and searched wooded areas near the family’s home.

But Norwood evaded cops and was able to leave the area, apparently in a stolen Toyota sedan, police said.

Fauquier Sheriff Robert Mosier said on Saturday afternoon that it appeared Norwood had stolen a car about 10 miles from the home. Police were searching for a red 2007 Toyota Camry with the license plate WNG 7739.

The car had been reported stolen on Saturday morning. Mosier said bloodhounds had tracked Norwood’s scent to the area of the stolen car.