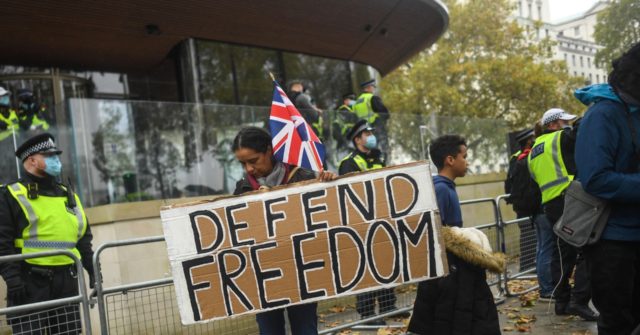 Over 220,000 Britons have signed a petition against the introduction of vaccine passports, forcing parliament…

Over 220,000 Britons have signed a petition against the introduction of coronavirus vaccine passports, potentially forcing Parliament to publicly debate the merits of such a scheme.

The petition warns that vaccine passports would limit the rights of people who haven’t or can’t have, or refused a Covid-19 vaccine. Such government-enabled discrimination would be “unacceptable”, those behind the claim said. At the time of publication, the petition had attracted 222,000 signatures.

The petitioners demanded, therefore, that the government commits “to not rolling out any e-vaccination status/immunity passport to the British public.”

Westminster Hall debates on public petitions had been suspended during the lockdown, supposedly to help Members of Parliament social distance. That was reversed this week, however, as Parliament voted Thursday to restore the process for the first time in months.

On Tuesday, Prime Minister Boris Johnson announced that he would be tasking Cabinet Minister Michale Gove with heading up the government’s research on the logistics of a vaccine passport system. The appointment has raised some eyebrows, given Mr Gove himself stridently denied that the government was planning to introduce health passes as recently as December.

Asked on live television whether Britons would need a pass to go to the pub, Gove gave a one-word answer: “no.”

Vaccine Minister Nadhim Zahawi has also denied that the government would force the public to carry vaccine passports, saying that such a measure would be discriminatory against those who can’t take the jab for medical or religious purposes.

Yet, Boris Johnson signalled this week that the government is considering vaccine passports domestically as well as internationally, meaning that Britons could be forced to present their ‘COVID status’ papers before entering pubs, theatres, and other public venues.

The head of policy and campaigns for the human rights pressure group Liberty, Sam Grant told the BBC that vaccine passports could “create a two-tier society where some people can access support and freedoms, while others are shut out – with the most marginalised among us hardest hit”.

“The road out of lockdown can’t ride roughshod over our rights,” Grant said, adding: “That’s why we need the Coronavirus Act to be repealed, and replaced with strategies that provide support to help people to follow health guidance.”

“That means rejecting proposals like immunity passports which are based on exclusion and division. Instead, we must work to bridge divides with strategies that protect everyone,” he concluded.

Mark Johnson of Big Brother Watch said: “The British public rejected ID cards. We’re not a papers-carrying country. A vaccine passport is like an ID card via the backdoor – especially if you have to carry it on your person for day to day activities.”

The notion of vaccine passports has taken off in Europe, which unlike Britain has an established recent history of authoritarianism and routine official paper-carrying, with German Chancellor Angela Merkel declaring on Thursday that the EU was in “agreement” over the issue and could implement the scheme by as early as the summer.