US coronavirus cases rise to 60: More Diamond Princess evacuees quarantined on US military bases test positive for the killer virus as CDC warns Americans to prepare for it to spread across the country 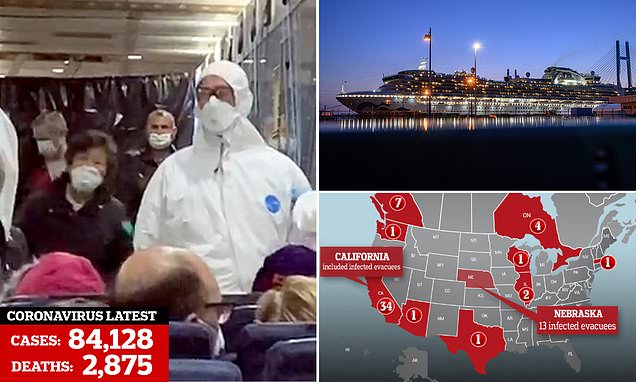 Coronavirus cases on US soil have now risen to 63…

Coronavirus cases on US soil have now risen to 60 with the addition of two more Diamond Princess cruise evacuees and another American who tested positive on Wednesday.

Officials have not yet revealed how the most recently diagnosed patient acquired the life-threatening infection, according to the Washington Post.

The US Centers for Disease Control and Prevention (CDC) confirmed the positive test results of an additional six cruise evacuees, including four that had already been announced by local health departments.

At least five of the new patients were evacuated from the Diamond Princess cruise ship last week. They were then transported to three different quarantine sites: military bases in California and Texas and the National Quarantine Unit in Nebraska.

Global cases have now surged past 82,000, with well over 2,800 deaths – though the vast majority of fatalities have still occurred in China, where the outbreak began.

The announcement comes after CDC officials warned Americans to prepare for the infection to spread, despite President Trump’s reassurances that the virus is ‘under control’ in the US.

On Wednesday, Health and Human Services (HHS) Secretary Alex Azar dismissed claims that President Trump was considering appointing an epidemic czar to replace him and oversee the US’s handling of the coronavirus outbreak.

President Trump announced Wednesday morning that he would hold a press briefing about coronavirus at 6pm that evening, after lawmakers criticized his administration’s response.

The CDC has reported 14 cases in the country and 45 cases among people evacuated from the cruise ship and the city of Wuhan in China.

The agency’s website does not yet reflect the 60th case, announced Wednesday by Secretary Azar.

So far, only two cases of human-to-human transmission of coronavirus have occurred in the US, but CDC officials believe it’s no longer a matter of ‘if’ but ‘when’ the virus will be active in US communities.

The CDC’s point person on the coronavirus outbreak, Deputy Director for Infectious Diseases Dr Nancy Messonnier advised parents to talk to their kids’ schools about ‘teleschooling’ in the event the event of quarantines or class cancellations amid an outbreak.

‘I told my children that they are not at risk now, but we as a family need to prepare for significant disruption in our lives,’ Dr Messonnier told reporters in a Tuesday press briefing.

It’s somewhat reassuring, however, that the new cases for which details have been released are among the cruise ship evacuees.

The number of people diagnosed in the US – without being repatriated – has held steady at 14 for weeks.

Another two people who were among among the 800-some Americans repatriated from Wuhan, the epicenter of the outbreak in China, have also tested positive for coronavirus.

This week’s additional cases among evacuees may have come to little surprise to the CDC, which advised against letting 14 American Diamond Princess passengers whose coronavirus tests came back positive as they were about to board the evacuation flights to the US continue on the cargo planes.

State Department officials ultimately overrode the health officials on the ground in Japan, where the ship had been quarantined.

Of the 328 evacuated people, 13 ‘high risk’ passengers were taken on to Nebraska’s high-grade quarantine.

CDC officials previously said they expected to see additional cases among the cruise ship evacuees, and diagnoses have indeed rolled in.

Meanwhile, LAX airport and travelers are on high alert after a flight attendant on a Korean Air flight there from South Korea, where cases have surged to over 1,200 in a matter of days and one US soldier on Camp Carroll military base has been diagnosed with coronavirus.

The White House Tuesday requested an additional $2.5 billion in funding for the coronavirus response.

Secretary Azar told the Senate Appropriations Subcomittee on Tuesday that the money would go to covering the costs of housing and quarantining Americans on military bases, improved surveillance, vaccine, treatment and diagnostic development, and ensuring that the government has a stockpile of personal protective equipment (PPE).

Azar estimated that about 300 million N95 face masks would be needed to protect American health care workers if the outbreak spreads in the US.

Subcommittee slammed the HHS for having secret briefings with lawmakers and accused Azar and the White House of submitting a ‘low-ball’ budget request with precious little detail.