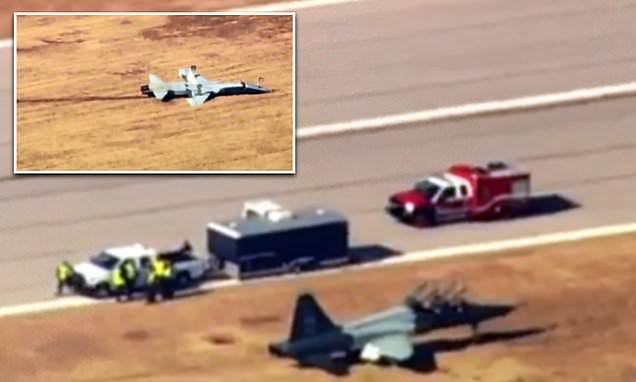 Two Air Force pilots have been killed during a mid-air training mission at Vance Air Force Base in Oklahoma.

The Air Force released a statement early Thursday afternoon confirming the casualties, saying they were the result of an ‘aircraft mishap’ which occurred shortly after 9 am.

Vance Air Force Base said that two T-38 Talon jets were involved in the incident and that two people were on board each of the aircraft.

It’s unclear whether the jets collided or whether one of the aircraft crashed during the mission.

Aerial footage from ABC 5 showed one of the jets on the ground appearing largely in tact following the incident.

The Base did not disclose the condition of the other two people who were taking part in the training mission when the ‘mishap’ occurred.

Several ambulances and fire trucks ere pictured on the premises of the base, with a spokesperson saying that emergency personnel were on hand to ‘assist with recovery efforts’.

Safety investigators are now set to look into the incident to determine what went wrong.

Oklahoma Senator James Lankford was quick to pay tribute to the Air Force employees following news of the accident, releasing a statement which read: ‘Our servicemen and women give everything, even their lives, to protect our nation.

‘I am deeply saddened by the deaths of two Airmen at Vance Air Force Base during a training session. I pray for God’s grace and healing as their families walk through this and to all those they serve with as they try to understand the difficult loss of their friend and coworker.’