Turkish Troops to Remain in Libya for Another 18 Months 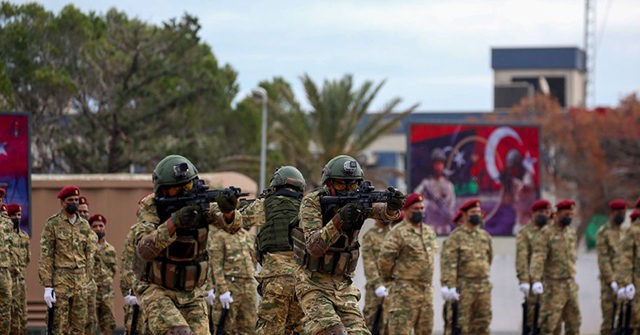 Turkish Troops to Remain in Libya for Another 18 Months

The Turkish parliament approved a plan Tuesday that would keep Turkish forces deployed in Libya for another 18 months.

Turkey intervened in the Libyan civil war last January when the internationally-recognized government in Tripoli was under siege from forces loyal to an alternative government in Tobruk and led by Gen. Khalifa Haftar.

The motion approved in Ankara on Tuesday asserted “there are threats from Libya to Turkey and the entire region, and if attacks resume again, Turkey’s interests in the Mediterranean basin and North Africa will be adversely affected.”

The Tripoli government signed a pact for military cooperation with Turkey in November and repaid Turkey for its military support by granting it offshore rights in the Mediterranean. The deal was denounced as a violation of international law by Greece, Cyprus, and Egypt, with the “unequivocal” support of the European Union.

Those three countries and Israel have long been working to develop some $600 billion in Mediterranean gas resources and build a pipeline from Greece and Israel to Italy — a pipeline that would have to pass through the waters Libya gave to Turkey.

Turkish opposition parties voted against the motion to extend the troop presence in Libya, and also in Afghanistan. The opposition also pushed back against the initial deployment of troops to Libya last year, warning that Turkey would be drawn into a “proxy war” and “expand the effects of conflicts in the region.”

“The Turkish decision Tuesday comes in the wake of a U.N.-brokered cease-fire in Libya that was declared in October. The cease-fire deal envisioned the departure of foreign forces and mercenaries within three months,” the Associated Press noted.

An analysis from the Lowy Institute warned in September that Turkish President Recep Tayyip Erdogan is playing a dangerous game in Libya, not only for influence in the Mediterranean but for leadership of the Muslim Brotherhood and jihadist forces in the Middle East, and using foreign adventures to distract Turkish voters from domestic problems.

“In reality, Turkey has neither the financial nor material capability to maintain itself as a regional power, despite the rhetoric funneling out of the halls of Erdoğan’s Presidential palace. Greece, France and Israel are losing patience with Turkish bellicosity in the Eastern Mediterranean and are strategizing to counter any Turkish moves in Libya. Erdoğan’s AKP is also tired and worn out, lacking vision in strategic policy and failing in its attempts to find solutions to the endemic social and economic ills at present in Turkey,” the Lowy Institute judged.

Egypt’s patience with Erdogan’s adventurism will apparently stretch a bit further, as Egyptian President Abdel Fattah el-Sisi said in early December that he would prefer a “comprehensive political solution” to deploying Egyptian troops in the “brotherly country” of Libya.

Sisi previously indicated Egypt has a “red line” that would trigger military intervention in Libya, should Turkey or its proxy militias move too far into the oil-rich Libyan territory Egypt regards as a security buffer.

“The Egyptian policy consists of building excellent relations with its neighbors through dialogue. Turkey, like any other country in the region, must abide by international law and the law of the sea and refrain from taking any unilateral action in the absence of consultations or at the expense of the region’s security and safety,” Sisi said December 9, evidently softening his stance toward Turkey slightly, although he still complained about “the presence of mercenaries and the proliferation of weapons among extremist militias” in Libya.

The Turkish vote to extend military intervention in Libya was not welcomed by some Libyan parliamentarians, who accused Turkey of acting to protect its own interests at the expense of Libyans, jeopardizing negotiations between Libyan factions, and violating international agreements to withdraw foreign forces quickly.

“Turkey does not want a solution in Libya because it benefits from unrest and turmoil,” charged Libyan MP Zidan al-Zadma.