Trump Says Antifa to Be Designated a Terrorist Organization 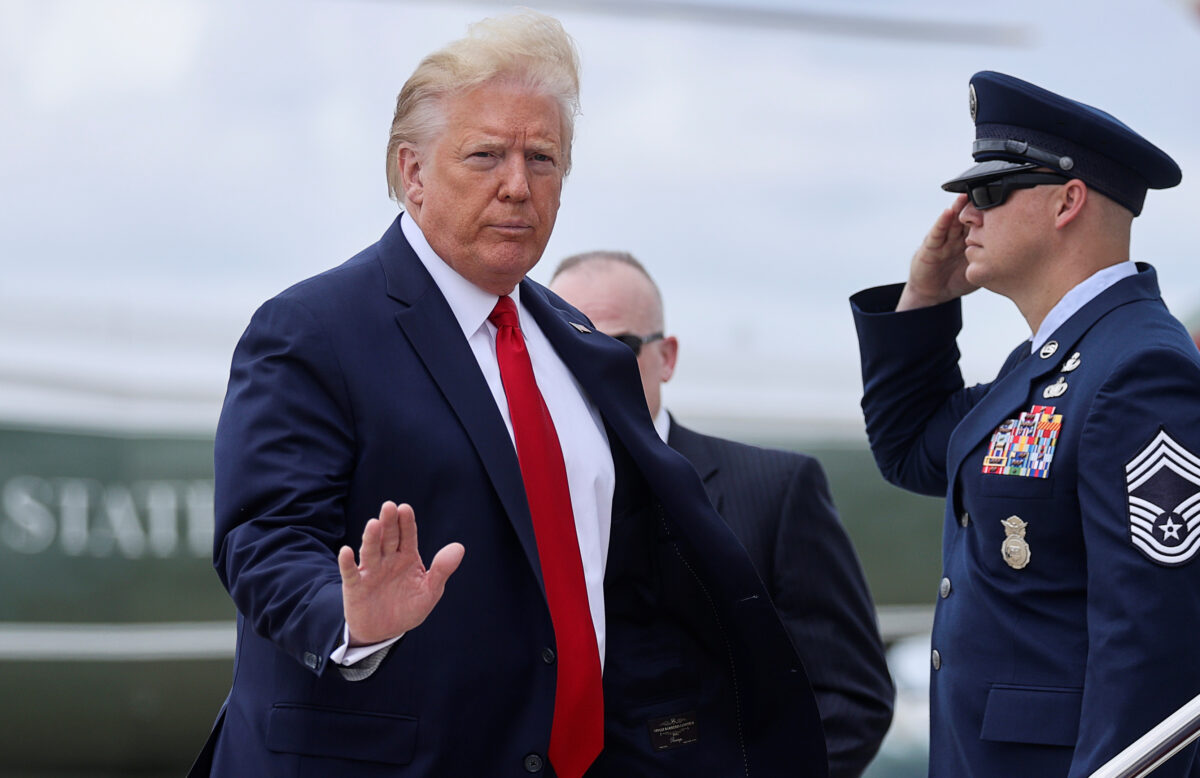 Trump Says Antifa to Be Designated a Terrorist Organization

President Donald Trump said his administration would be designating Antifa as a terrorist organization, after…

President Donald Trump said his administration would be designating Antifa as a terrorist organization, after nearly a week of widespread looting and riots following the death of an unarmed black man while in police custody in Minneapolis.

Before making the announcement, Trump commended the National Guard for shutting down the chaos in Minneapolis that he said was steered by “ANTIFA led anarchists, among others.”

What started as peaceful protests over the death of George Floyd, who said multiple times he couldn’t breathe and became non-responsive while a police officer knelt on his neck, has turned into violent chaos, which federal officials say was spurred by outside agitators and radicals.

Trump said the majority of people rioting over the past few days in Minneapolis were from out of state and that they were “harming businesses (especially African American small businesses).” Minnesota Gov. Tim Walz has pointed to estimations that show 80 percent of the rioters on May 29 came from outside Minnesota, with the remaining 20 percent being actual Minnesotans.

Attorney General William Barr echoed the president in a statement soon after the move was declared. Barr called the violence carried out by Antifa in connection with the rioting “domestic terrorism” and noted that it would be “treated accordingly.”

“It is time to stop watching the violence and to confront and stop it,” Barr said. “The continued violence and destruction of property endangers the lives and livelihoods of others, and interferes with the rights of peaceful protestors as well as all other citizens.”

Federal law enforcement will be used to apprehend and charge “violent radical agitators,” the attorney general said. It isn’t known how many Antifa members were taking part in the protests across the United States.

In an earlier statement on May 30, Barr said that the violence within the protests appears to have been “planned, organized, and driven” by groups of outside radicals and agitators.

Dozens of cities across the country braced for another night of unrest on May 31, as newly added curfews in some areas still failed to quell confrontations between protesters and police.

In recent days, violence has rocked Atlanta, Los Angeles, Philadelphia, Denver, Cincinnati, and New York, as well as Portland, Oregon, and Louisville, Kentucky, among others.

Richard Mack, a former sheriff in Arizona and founder of the Constitutional Sheriffs and Peace Officers Association (CSPOA), said he agreed with the president’s designation, calling it a “move in the right direction.”

“If Antifa is calling for violence and are promoting violence, then they deserve the terrorist designation that President Trump has given them,” Mack told The Epoch Times.

“If the American people reject all violence, then our national security will benefit even more,” Mack added. “Liberty is still the answer, and peace is still the solution.”

The firing and arrest of Derek Chauvin, the police officer filmed kneeling on Floyd’s neck, on charges of third-degree murder and manslaughter has failed to satisfy protesters. Three officers who stood by during the incident have yet to be charged.

Trump has warned that crossing state lines to incite violence is a federal crime, and previously called for governors and mayors to get “tougher” on the riots.

It’s also not the first time Trump has talked about designating Antifa as a terrorist group. In July last year, Trump said his administration was considering whether to declare the group “a major organization of terror.”

At the time, Sens. Bill Cassidy (R-La.) and Ted Cruz (R-Texas) proposed a resolution in the Senate to condemn the acts of violence carried out by members of Antifa and to label the group as a domestic terrorist organization.

The senators proposed the resolution following Antifa members’ assault on independent journalist Andy Ngo, who is known for extensively documenting Antifa violence. He was punched in the face, kicked, and had cups of a white substance thrown at him while he was covering one of the group’s protests in Portland, Oregon.

Ngo, in a Twitter response to Trump’s latest announcement, said, “Federal investigative authorities must dismantle the networks & hundreds of antifa cells across the US who radicalize, train & carry out organized extremist violence.”

Meanwhile, in an interview with CNN’s Jake Tapper, national security adviser Robert O’Brien accused the group of using organized and violent tactics, asking what the FBI has been doing about it.

“The president and the Attorney General want to know from FBI Director Wray what the FBI has been doing to track and dismantle, and surveil, and prosecute Antifa,” O’Brien said on May 31.

“And if that hasn’t been happening, we want to know what the plan is going forward,” he said. “These Antifa militant radicals who come in to our cities and cross state lines, they are organized and use Molotov cocktails and fireworks and gas to burn down our cities.”

Published in Barr, Crime, Law, Terrorism, Trump and US News