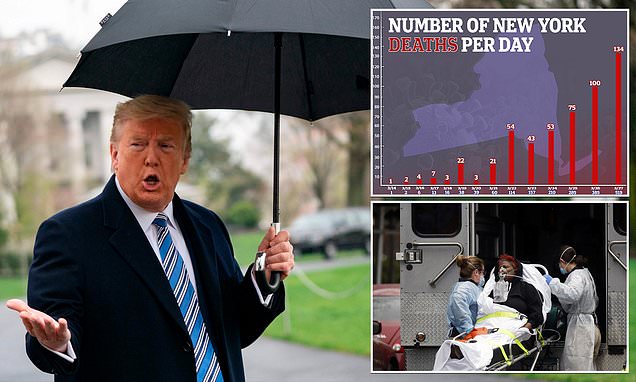 President Trump is considering quarantining New York, Connecticut and New Jersey in desperate efforts to slow the spread of the coronavirus pandemic.

The move will restrict travel to and from the three states, which are some of the hardest-hit by the outbreak.

‘Some people would like to see New York quarantined because it’s a hotspot — New York, New Jersey maybe one or two other places, certain parts of Connecticut quarantined. I’m thinking about that right now,’ he said Saturday.

‘We might not have to do it but there’s a possibility that sometime today we’ll do a quarantine – short term – two weeks for New York, probably New Jersey, certain parts of Connecticut.’

He said the possible quarantine would be ‘short-term’ but that it would be ‘enforceable’.

The president dismissed the idea that he would need to deploy the National Guard to ensure residents comply with the quarantine rules.

‘We’re not going to need that,’ he said.

The move would help tackle the issue other states are facing where New Yorkers are fleeing the city and traveling to other states and areas, where they are potentially risking more lives and spreading the disease further afield.

‘Restrict travel, because they’re having problems down in Florida, a lot of New Yorkers going down. We don’t want that,’ he said.

‘I don’t even know what that means. I don’t know how that could be legally enforceable,’ said Cuomo.

‘And from a medical point view, I don’t know what you would be accomplishing.

Cuomo said he had spoken with Trump earlier Saturday and the two had not discussed a possible quarantine.

The president made the comments as he touched down in Air Force One at Joint Base Andrews around noon Saturday and spoke to reporters.

‘We’re looking at it,’ he said about the possible quarantine of the three states.

‘We’re looking at it and will be making a decision. A lot of the states that are infected – they’ve asked me if I’d look at it so we’re going to look at it. Maybe for a short period of time.’

‘It would be for a short time’ for parts of New York, Connecticut and New Jersey, he said.

However when asked if he would shut down the New York City subway he said: ‘No we wouldn’t do that.’

He said he would talk to New York state Governor Cuomo about the measures later today.

Trump also took the opportunity to praise the work Congress had done to pass the $2 trillion emergency bailout package, which he signed into law Friday.