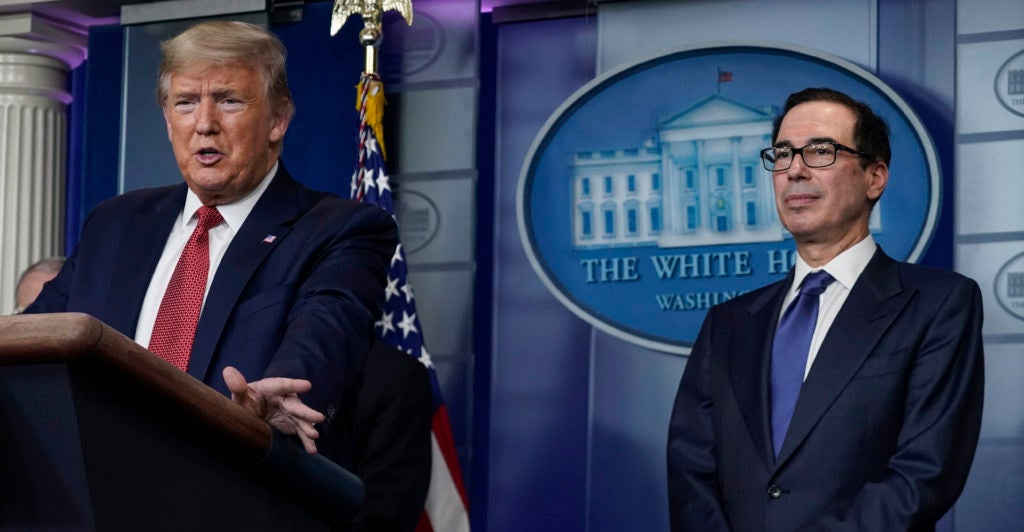 Some Republican senators are concerned that a provision for $600…

President Donald Trump on Wednesday expressed optimism about the prospects for passage of an emergency coronavirus relief bill to bridge the nation’s temporary economic shutdown, as the Senate moved closer to agreement.

“Together, this $2.2 trillion legislative package is bigger than anything I believe ever passed in Congress,” Trump told reporters, comparing the massive bill with President Franklin Roosevelt’s New Deal programs of the 1930s and 1940s.

“Perhaps, relatively speaking, if you go back and look during the FDR New Deal days, there was something that if you time-value it [for inflation], it was bigger,” the president said. “But this is certainly, in terms of dollars, far and away the biggest ever, ever done. That’s a tremendous thing, because a lot of this money goes to jobs, jobs, jobs and families, families, families.”

Just before midnight, the Senate approved the bill in a unanimous vote of 96-0 after days of deadlock and fierce negotiations between Republicans and Democrats that yielded biting public statements.

The package now moves to the House, for what Speaker Nancy Pelosi, D-Calif., has said will be a voice vote, likely Friday, in part because it’s not clear how many House members would return to Washington.

The bill includes $350 billion in loans for businesses for job retention purposes as the nation hunkers down during the spread of the contagious new coronavirus, which causes the disease COVID-19.

The package has an additional $300 billion in direct cash payments, or $3,400 for the typical family of four earning less than $99,000 per year, and up to $250 billion in expanded unemployment benefits.

Four Republican senators, however, expressed concern that unemployment insurance paying out $600 per week—more than many low-wage jobs pay—would be a disincentive to work. Those GOP senators were Tim Scott and Lindsey Graham of South Carolina, Rick Scott of Florida, and Ben Sasse of Nebraska.

The four senators who missed the vote also are all Republicans, who hold 53 seats in the chamber: Rand Paul of Kentucky, who has tested positive for COVID-19; Utah’s Mike Lee and Mitt Romney, who isolated themselves after contact with Paul; and John Thune of South Dakota, who said he felt ill.

“We want to have enhanced unemployment insurance,” Treasury Secretary Steven Mnuchin told reporters. “This is the only way we could ensure the states could get money out quickly, in a fair way. So, we used $600 across the board. I don’t think it will create incentives [not to work]. Most Americans, what they want, they want to keep their jobs.”

Trump is seeking to jump-start and reopen the economy as quickly as possible, but his coronavirus task force is attemping to balance economic and medical concerns.

One reporter asked the president whether he was making political calculations regarding his hopes of reopening the economy by Easter Sunday, which is April 12.

“I think it is very clear that there are people in your profession that write fake news. You do,” Trump told the reporter, then pointed at another reporter and said, “She does.”

“Nobody has done the job that we’ve done,” the president added, indicating Vice President Mike Pence and the top public health officials flanking him. “And it’s lucky that you have this group here right now for this problem, or you wouldn’t even have a country left.”

As of noon Wednesday, the U.S. had 54,453 confirmed cases of COVID-19 and a total of 737 deaths, according to the Centers for Disease Control and Prevention.

After it appeared that Republicans and Democrats had reached a compromise on a stimulus bill over the weekend, Pelosi put forward a proposal that includes numerous subsidies for the wind and solar energy industries and other liberal causes.

The compromise package that headed for Senate passage after 11 p.m. included $25 million for the Kennedy Center, a huge performing arts venue in Washington. When asked about that, Trump said he supported it.

“I approved that. It was $35 million, and we actually took off $10 million. I’m a fan of that, although I haven’t spent time there because I’m far too busy,” Trump said, adding:

I’d love to go there for evenings, but I’m too busy doing things, because that’s more important for me. The Kennedy Center has suffered greatly because nobody can go there. It’s essentially closed, and they do need some funding. And I said, ‘Look, that was a Democrat request. That was not my request.’

But you’ve got to give them something. It’s something that they wanted. It works that way. Democrats have treated us fairly. I really believe that we had a very good back-and-forth.

Trump said he spoke “a number of times” with Senate Minority Leader Chuck Schumer, D-N.Y., and that Democrats “had requests also.”

That’s not a good sound bite, but that’s the way life works. With that being said, the Kennedy Center, they do a beautiful job. … This thing has been devastating to it.