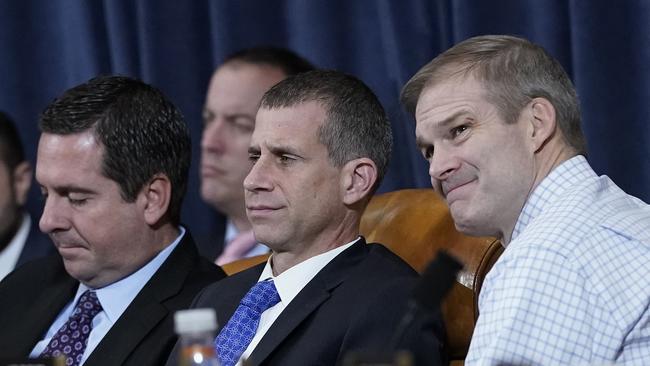 "The Democrats’ impeachment inquiry is not the organic outgrowth of…

Expanding on the staff memo issued before the farce of the public impeachment hearings, Axios reports that Republicans on the House committees investigating the Ukraine controversy have concluded, in a 100-plus-page prebuttal report, that President Trump committed “no quid pro quo, bribery, extortion, or abuse of power,” but rather that the president made “entirely prudent” decisions driven by a “reasonable skepticism” about corruption in the country.

The report – to be released to Congress as soon as this evening – will reportedly provide the basis for Republicans’ rejection of Democrats’ anticipated articles of impeachment against the president for the remainder of the House proceedings.

The Hill reports that a draft of the document echos the president’s arguments in his own defense, with Republicans refusing to admit any wrongdoing:

“Understood in this proper context, the President’s initial hesitation to meet with President Zelensky or to provide U.S. taxpayer-funded security assistance to Ukraine without thoughtful review is entirely prudent,” the draft impeachment report reads.

Specifically, the GOP paints a picture of “unelected bureaucrats” disagreeing with the president’s style, world view and foreign policy decisions.

Additionally, Republicans attack the impeachment inquiry led by Democrats as a partisan campaign to shake up the political system.

“The Democrats’ impeachment inquiry is not the organic outgrowth of serious misconduct; it is an orchestrated campaign to upend our political system,” the draft reads.

“Democrats in the House of Representatives have been working to impeach President Trump since his election.”

Asserting that that the Democrats’ impeachment case rests “almost entirely on hearsay, presumption and emotion” to arrive at a “predetermined outcome.”

Axios notes that, according to officials, The White House had no level of involvement in the drafting of the document.

“They gave us no direction or input,” one of the officials said.

Finally, we note that Democrats have drafted their own report, and all members of the House Intelligence Committee can review a draft in classified spaces tonight (the committee will meet behind closed doors tomorrow evening to adopt the report and add Republicans’ views).