Trump Backs Away From Conflict With Iran, Says US ‘Ready to Embrace Peace’ 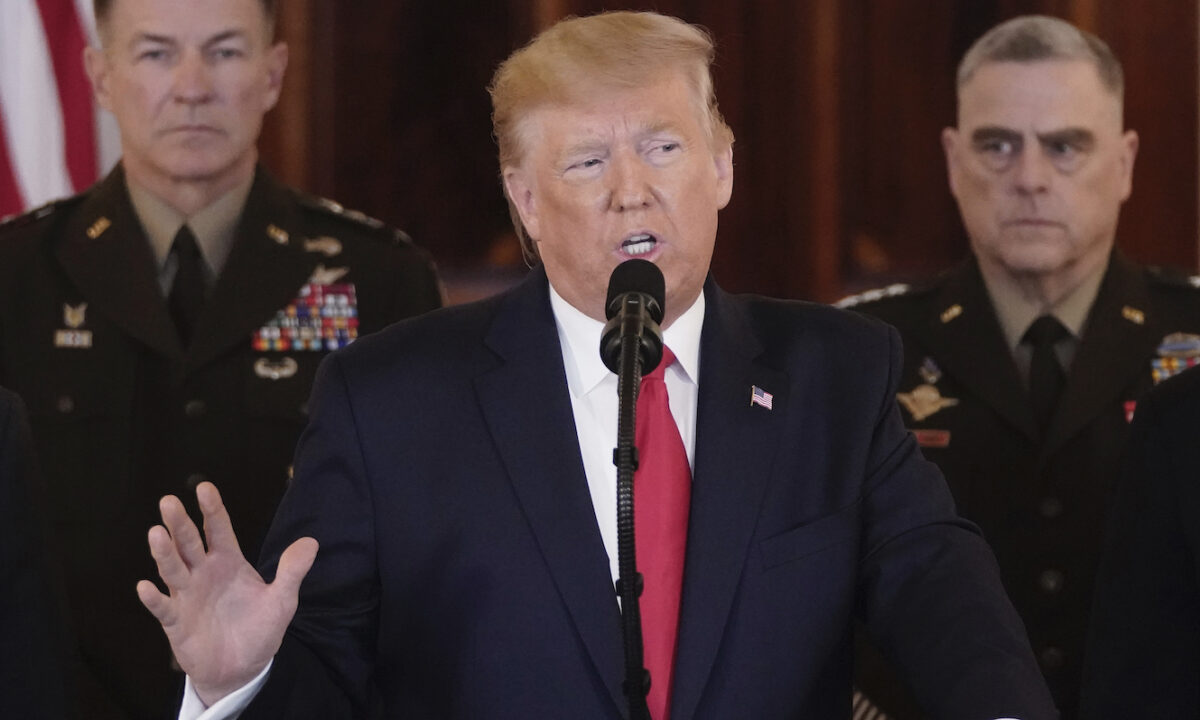 Trump Backs Away From Conflict With Iran, Says US 'Ready to Embrace Peace'

President Donald Trump backed away from escalating a military conflict…

President Donald Trump backed away from escalating a military conflict with Iran hours after a barrage of missiles were launched at American troops stationed at Iraqi bases, indicating that the United States would not retaliate.

“Iran appears to be standing down which is a good thing for all parties concerned and a very good thing for the world,” Trump said in a televised address from the White House.

Rather than pursuing a direct military conflict with Tehran, Trump instead called for economic sanctions and called on NATO allies to become more involved in the region.

“The United States is ready to embrace peace with all who seek it,” he said.

“As we continue to evaluate options in response to Iranian aggression, the United States will immediately impose additional punishing economic sanctions on the Iranian regime,” Trump also said. “These powerful sanctions will remain until Iran changes its behavior.”

The president has long been a critic of the U.S. involvement in Iraq and told supporters during his 2016 campaign that he wouldn’t start any new wars. At the same time, he also promised to bring home American troops from the Middle East.

During the attack, in which Iran fired more than a dozen missiles at two Iraqi bases, no American or Iraqi casualties were reported, according to Trump. Iran said it fired the missiles after a U.S. drone strike that killed top commander Qassem Soleimani, who headed Iran’s Revolutionary Guards’ Quds Force and has been blamed with facilitating attacks on Americans while U.S. officials have said he was chief architect of Iran’s proxy wars in the region.

Ali Khamenei, the country’s supreme leader, made it clear that Iran saw its longterm mission as pushing the United States out of the Middle East after Soleimani’s death. “What matters is that the presence of America, which is a source of corruption in this region, should come to an end,” he said on Wednesday, according to state-run media.

But Trump also sought to ramp up pressure on Iran, calling on other nations, to pull out of “the remnants of the Iran deal,” known as the Joint Comprehensive Plan of Action, that was ratified by Germany, the United States, the United Kingdom, Russia, France, China, and the European Union.

“We must all work together toward making a deal with Iran that makes the world a safer and more peaceful place,” Trump said, noting that he will not allow Iran to obtain a nuclear weapon while he is in office.

Republican lawmakers have called on the Trump administration to tone down tensions with Iran. Sen. Lindsey Graham (R-S.C.) wrote in a series of Twitter posts that “retaliation for the sake of retaliation is not necessary at this time.”

“What is necessary is to lay out our strategic objectives regarding Iran in a simple and firm fashion,” Graham added.

Senate Majority Leader Mitch McConnell (R-Ky.) praised Trump for not taking immediate action after the missile strikes. Trump will “protect American lives and interests,” he wrote, but he also wants to “avoid conflict or needless loss of life.”

VIEW THE ARTICLE
The Epoch Times.com

Published in Trump, US News and World Politics