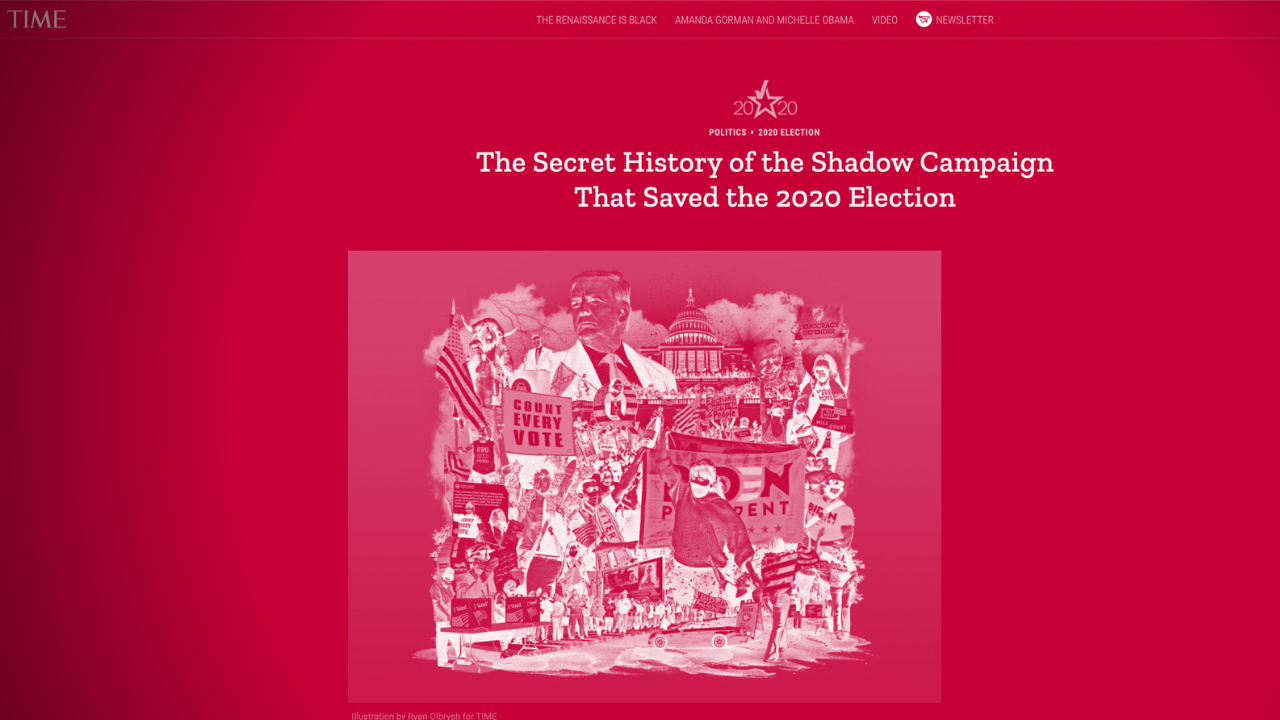 Time Magazine has published intricate details of what they deem “a conspiracy unfolding behind the scenes, one that both curtailed the protests and coordinated the resistance from CEOs. Both surprises were the result of an informal alliance between left-wing activists and business titans.”

The article even confirms both The National Pulse’s reporting on former Obama lawyer Ian Bassin, as well as Revolver.news’s assertion of the involvement of Norm Eisen in what amounted to a major admission of a globalist set up to leverage the coronavirus, mail-in voting, and corporate interest to oust President Trump from office.

In a 6500-word article, author Molly Ball lays out how it all happened:

The handshake between business and labor was just one component of a vast, cross-partisan campaign to protect the election–an extraordinary shadow effort… Their work touched every aspect of the election. They got states to change voting systems and laws and helped secure hundreds of millions in public and private funding.

Time Magazine is scarcely a right-wing website, and the article goes to lengths to make excuses on behalf of the “shadow” campaign, they claim: “The scenario the shadow campaigners were desperate to stop was not a Trump victory. It was an election so calamitous that no result could be discerned at all…”

But the piece concedes “much of this activity took place on the left.”

By the eighth paragraph, Ball quotes Norm Eisen, who in early September 2020 the Revolver.news website described as the “Legal hatchet man and central operative in the “color revolution” against President Trump.”

By the eleventh, they note the efforts of Ian Bassin, who The National Pulse exclusively reported on – also in September.

Ball writes that “participants” like Eisen and Bassin now “want the secret history of the 2020 election told, even though it sounds like a paranoid fever dream–a well-funded cabal of powerful people, ranging across industries and ideologies, working together behind the scenes to influence perceptions, change rules and laws, steer media coverage and control the flow of information.”

Ball identifies Mike Podhorzer, political director at AFL-CIO, as “the architect” of the conspiracy.

“The first task was overhauling America’s balky election infrastructure,” Time states, with particular focus on what Phil Kline and the Amistad Project had brought to the attention of the world with the assistance of The National Pulse in October.

An assortment of foundations contributed tens of millions in election-administration funding. The Chan Zuckerberg Initiative chipped in $300 million.

The story directly echoes The National Pulse reporting from October 6th, though doesn’t credit the article which stated at the time: “The group recently received $250 million from Facebook founder Mark Zuckerberg, and the significant majority of the sum has been funneled into Democratic districts.”

The death of George Floyd was also cynically leveraged for political ends, the article claims:

The racial-justice uprising sparked by George Floyd’s killing in May was not primarily a political movement. The organizers who helped lead it wanted to harness its momentum for the election without allowing it to be co-opted by politicians. Many of those organizers were part of Podhorzer’s network, from the activists in battleground states who partnered with the Democracy Defense Coalition to organizations with leading roles in the Movement for Black Lives.

And the claim is even made that campaigners should be used for their votes and those they could bring with them in their communities, but not to let them anywhere near the levers of power aka politicians.

Then, America’s big corporates stepped in.

While the AFL-CIO and the U.S. Chamber of Commerce pretend to be at each other’s throats, they reality is much of the back and forth is kabuki theater. The article confirms as much:

Neil Bradley, the Chamber’s executive vice president and chief policy officer… wanted to send a broader, more bipartisan message. He reached out to Podhorzer, through an intermediary both men declined to name. Agreeing that their unlikely alliance would be powerful, they began to discuss a joint statement pledging their organizations’ shared commitment to a fair and peaceful election.

The stage was set for the conspiracy to be carried out.

In effect, big business, big activist groups, big unions, and big media would collaborate to keep President Trump away from office and keep reporting on the steal off the airwaves and social media.

And while the article continues to claim the activists were not trying to stop Trump winning but rather guarantee a fair election, one line gives the whole thing away.

Ball reveals an 11pm Zoom call on election night wherein – when President Trump was in the lead – Podhorzer stepped in to calm his colleagues down:

“Podhorzer presented data to show the group that victory was in hand.”

And he told Time something very true: “I don’t think the Trump campaign had a backup plan.”

The article even claims that grassroots conservative activists came close to rumbling the plan, especially in Michigan, where observers were locked out of the counting room and placards placed on windows to stop them seeing inside.

The rationale for the article is simple, and even contained within the piece:

As I was reporting this article in November and December, I heard different claims about who should get the credit for thwarting Trump’s plot.

Liberals argued the role of bottom-up people power shouldn’t be overlooked, particularly the contributions of people of color and local grassroots activists.

Others stressed the heroism of GOP officials like Van Langevelde and Georgia secretary of state Brad Raffensperger, who stood up to Trump at considerable cost. The truth is that neither likely could have succeeded without the other.

In other words, now the constituent parts are trying to claim credit, and along they way, they’ve said the quiet part out loud.