This One Image Says It All: Americans Despise The Establishment Media Because They Have Become Activists Rather Than Journalists

By Susan Duclos – All News PipeLine

– All They Think About And Report Is “Orange Man Bad”

As long time ANP readers know, we do not put much stock into polling numbers, but rather use polls to get a handle on patterns and trends.

With that said, the historical pattern for the establishment media aka MSM, has been a steady downward trend since the 1970s.

The media has failed to inform, have offered articles which were outright “fake news,” that had to be corrected, edited, changed and/or deleted many times (mostly by CNN), reported on selectively edited video clips (CNN and Washington Post recently settled with a MAGA teen they defamed and lied about), which provides the evidence for why trust in the establishment media is at rock bottom.

The image below shows that yet again, on a completely different type of reporting, health instead of politics, the liberal establishment media, because of their own activism and bias, has yet again suffered a nosedive in support by the general public. 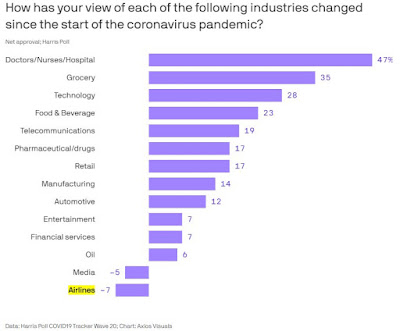 Again, we are ignoring the actual numbers and just looking at the trend in the graph, where each industry but two, has seen an uptick in the view of Americans, while only two industries in the graph above are in the negative, showing they have lost even more support over the course of the COVID-19 pandemic.

When people are sick and dying, generally the public isn’t so interested in media personalities screeching about blame because “ORANGE MAN BAD.” More are interested in getting straight news rather than opinion reporting, which sadly, straight news hasn’t been reported by the media in years.

Related: ‘RUINED their own profession’: Richard Grenell brutally lists how media have destroyed THEMSELVES and boy howdy the truth HURTS

MEDIA ACTIVISTISM IS KILLING THE INDUSTRY

As the survey question in the Axios/Harris poll specifically referenced the timeframe of reporting since the coronavirus, we started with that, but this type of pattern is being seen against the establishment media across the board.

The media pretends that the arson, vandalism, and attacks on police are just “mostly peaceful,” protests, while ignoring some of the deadly crimes being committed.

Ask yourself if you heard on any mainstream media source that a black conservative man in Portland, Oregon was stabbed by an Antifa “protester” aka domestic terrorist?

Antifa militant and convicted pedophile Blake David Hampe was arrested in the early hours of Saturday following his stabbing of a black Trump supporter in Portland.

The Trump supporter and conservative, who goes by the name Black Rebel on twitter, posted several updates to his condition from the ambulance and hospital. In the Periscope livestream, he alleged that Hampe had stalked him and his group of friends for several blocks in Portland before stabbing him.

“That knife was long enough. He stabbed me to kill me.”

(PLEASE HELP SUPPORT ANP: With Independent Media being censored on almost every internet platform, reader donations are what keeps websites like ANP up and running. Your donations are greatly appreciated. Thank you, Stefan & Susan.)

Did you hear from the MSM, (local stations excluded) that a reporter from WRDW in Pennsylvania conducted a little experiment over the controversial push by liberals to have a “mail-in” election, with President Trump declaring multiple times that would be ripe for miscounts, fraud and a whole host of issues that could effect the integrity of the presidential election?

The reason you didn’t hear about this experiment from  the national news and huge media outlets is because it proved president Trump’s point.

WRDW in PA., and affiliate of CBS, did report the experiment their reporter conducted, while at the same time other CBS “journalists” were busy claiming that President Trump has no proof that mail-in voting is problematic.

Did you hear from the establishment media that in Portland, Oregon, rioters set a pig head wearing a police hat, on fire on top of an American flag?

Rioters set a pig head on fire on Thursday night outside the federal courthouse in Portland, an action which comes after the city has been rocked by violent rioting for over 60 consecutive nights.

“Antifa protesters dumped a bloody severed pig’s head on an American flag outside the Justice Center in downtown Portland,” journalist Andy Ngo reported. “They put a cop’s hat on it and set all of it on fire.”

See video evidence over at The Daily Wire.

Of course the media is either ignoring stories like these, or downplaying them, or in some cases writing something tiny, then burying it as fast as they can.

The reason is simple. They are already on record supporting Antifa groups, so any news showing the violence and thuggery on the part of Antifa or other groups, has to be hidden so they can continue with their false narrative of “mostly peaceful protesters.”

Here is another one: Democrat headquarters burned in Arizona, which of course liberals immediately blamed President Trump for, until police revealed the arsonist was a Democrat that had worked there previously.

The initial story, with blaming Trump ran, but the follow up with the accurate truthful reporting didn’t materialize, because it didn’t fit the “orange man bad” narrative.

While there are more examples than we can possibly put into one piece, the pattern is clear. Each of those examples were not found by a google search, or looking at any establishment media website, but were found scouring Independent Media sites.

There is no “mainstream media” anymore, there are only activists pretending to be objective.

Independent Media such as ANP, fully admit we have a bias, we lean conservative. If the establishment media would simply acknowledge that they too report from a  biased point of view, at least they would be showing some type of honesty and integrity.

They don’t though, they continue to claim they are “objective,” “not biased” and are not participating in liberal activism.

We’ll leave the last words for White House Press Secretary Kayleigh McEnany, in a compilation video of her accurate “mic drops” against the press where she is continually pointing out their hypocrisy, lies, and double standards.

Published in Corruption in the Media, Fake News and Political News