The Most Important Coronavirus Statistic: 43% Of U.S. Deaths Are From 0.6% Of The Population 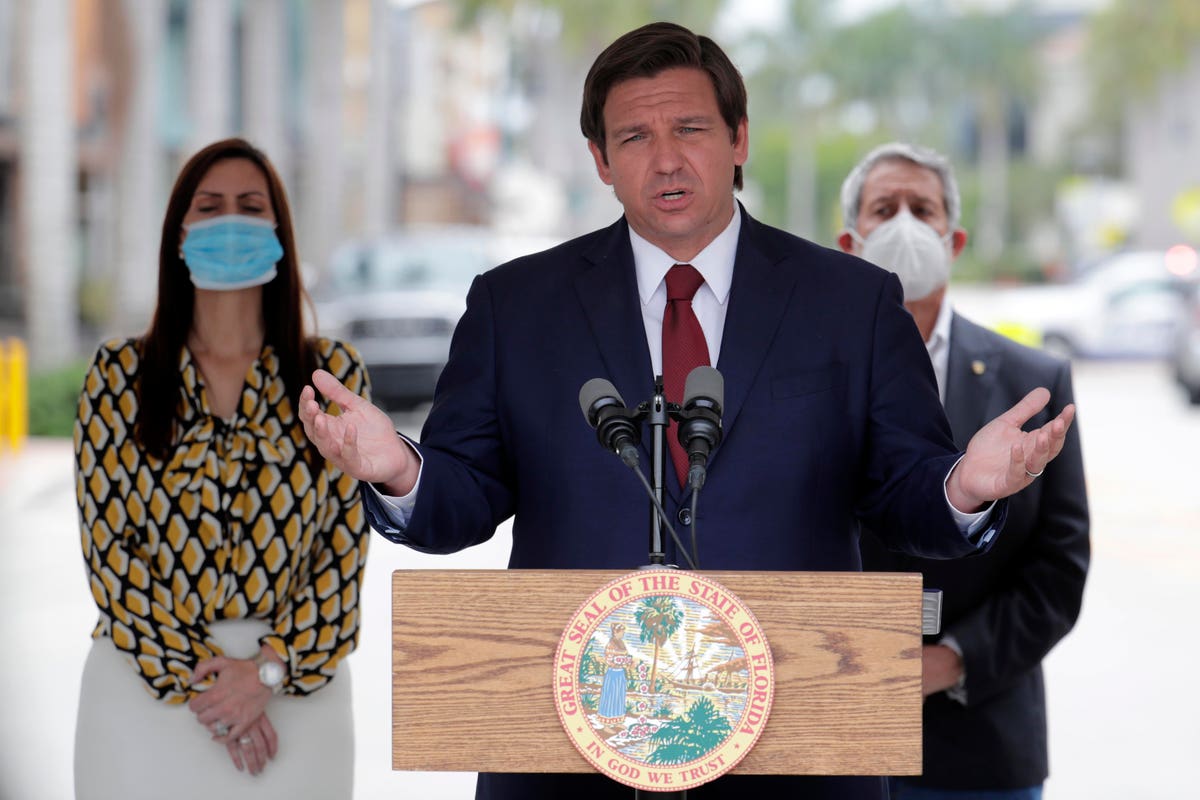 The Most Important Coronavirus Statistic: 42% Of U.S. Deaths Are From 0.6% Of The Population

A single statistic may hold the key to resolving the…

Americans are vigorously debating the merits of continuing to lock down the U.S. economy to prevent the spread of COVID-19. A single statistic may hold the key to resolving this debate: the astounding share of deaths occurring in nursing homes and assisted living facilities.

2.1 million Americans, representing 0.62% of the U.S. population, reside in nursing homes and assisted living facilities. (Nursing homes are residences for seniors needing help with activities of daily living, such as taking a shower or getting dressed, who also require 24/7 medical supervision; assisted living facilities are designed for seniors who need help with activities of daily living, but don’t require full-time on-site medical supervision.)

According to an analysis that Gregg Girvan and I conducted for the Foundation for Research on Equal Opportunity, as of May 22, in the 39 states that currently report such figures, an astounding 43% of all COVID-19 deaths have taken place in nursing homes and assisted living facilities. 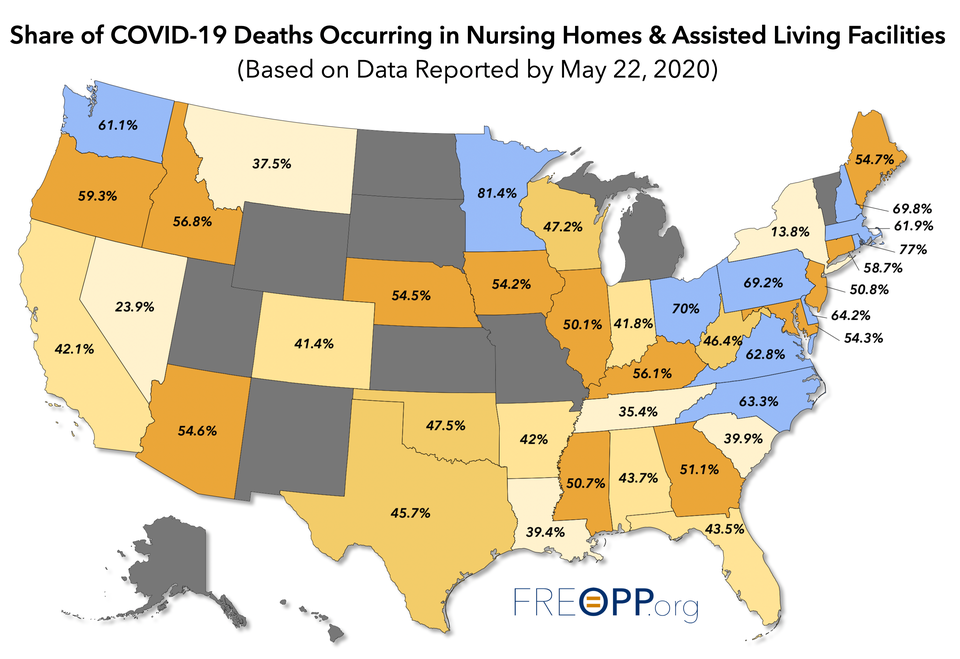 (Among states reporting their death totals, 42% of COVID deaths have taken place in long-term care facilities; we estimate the share as 43% for the full U.S. population, based on incorporating the demographics of the non-reporting states.)

And 43% could be an undercount. States like New York exclude from their nursing home death tallies those who die in a hospital, even if they were originally infected in an assisted living facility. Outside of New York, more than half of all deaths from COVID-19 are of residents in long-term care facilities.

Prior to last week, Ohio reported that 41% of COVID deaths were taking place in long-term care facilities. But updated disclosures last Friday, taking deaths prior to April 15 into account, upped that share to 70%.

In Minnesota, 81% of all COVID-19 deaths are of nursing home and residential care home residents. The region from the eastern seaboard from Virginia to New Hampshire has been especially hard-hit.

Another way to cut the data is to look at nursing home and assisted living facility deaths as a share of the population that lives in those facilities. On that basis, three states stand out in the negative direction: New Jersey, Massachusetts, and Connecticut.

In Massachusetts and Connecticut, COVID deaths per 10,000 nursing home and assisted living facility residents were 703 and 827, respectively. In New Jersey, nearly 10 percent of all long-term care facility residents—954 in 10,000—have died from the novel coronavirus. 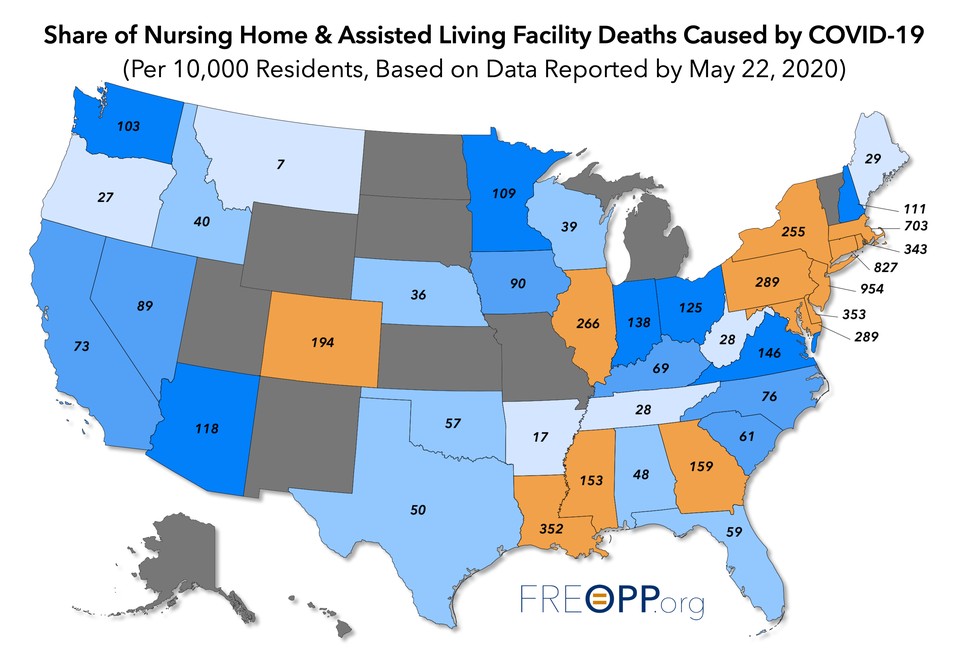 The tragedy is that it didn’t have to be this way. On March 17, as the pandemic was just beginning to accelerate, Stanford epidemiologist John Ioannidis warned that “even some so-called mild or common-cold-type coronaviruses have been known for decades [to] have case fatality rates as high as 8% when they infect people in nursing homes.” Ioannidis was ignored.

Instead, states like New York, New Jersey, and Michigan actually ordered nursing homes to accept patients with active COVID-19 infections who were being discharged from hospitals.

The most charitable interpretation of these orders is that they were designed to ensure that states would not overcrowd their ICUs. But well after hospitalizations peaked, governors like New York’s Andrew Cuomo were doubling down on their mandates.

As recently as April 23, Cuomo declared that nursing homes “don’t have a right to object” to accepting elderly patients with active COVID infections. “That is the rule and that is the regulation and they have to comply with that.” Only on May 10—after the deaths of nearly 3,000 New York residents of nursing homes and assisted living facilities—did Cuomo stand down and partially rescind his order.

Cuomo’s change of heart came too late for Maria Porteus. Her father, Carlos Gallegos, died of COVID-19 in a Long Island nursing home in April that adhered to Cuomo’s mandate. “It’s a slap in the face,” she said, “because he’s not taking responsibility for what happened to my father and so many others.”

Why Florida has performed better with vulnerable seniors

Contrast the decisions by governors like Cuomo with those of Florida Gov. Ron DeSantis. In Florida, all nursing home workers were required to be screened for COVID-19 symptoms before entering a facility. On March 15, before most states had locked down, DeSantis signed an executive order that banned nursing home visitations from friends and family, and also banned hospitals from discharging SARS-CoV-2-infected patients into long-term care facilities.

“Every day on these calls [with hospitals], I would hear the same comments and questions around, ‘We need to get these individuals returned back to the nursing home,’” said Mary Mayhew, who runs Florida’s Agency for Healthcare Administration. “We drew a hard line early on. I said repeatedly to the hospital, to the CEOs, to the discharge planners, to the chief medical officers, ‘I understand that for 20 years it’s been ingrained, especially through Medicare reimbursement policy, to get individuals in and out. That is not our focus today. I’m not going to send anyone back to a nursing home who has the slightest risk of being positive.’ What we said constantly is let’s not have two cases become 20 or five become 50. If you don’t manage this individual as you return them back, you will have far more being transferred back to the hospital.”

Florida also prioritized long-term care facilities for personal protective equipment, or PPE, with the understanding that it was just as important, if not more so, to protect workers at nursing homes and assisted living facilities. “If I can send PPE to the nursing homes, and they can prevent an outbreak there, that’s going to do more to lower the burden on hospitals than me just sending them another 500,000 N95 masks,” said DeSantis.

While it is too late for thousands of nursing home residents who have already died, there is still time to protect the millions who remain, by learning from Florida’s example.

First, every state that has mandated that nursing homes accept actively infected COVID-19 patients should immediately rescind and reverse that mandate.

Second, as Florida has done, we must restrict visits to nursing homes by family and friends for at least the next several months, with the possible exception of those who can prove that they are not actively infected with the novel coronavirus.

Third, we must prioritize nursing homes and assisted living facilities for personal protective equipment, at an at least equal level of priority as hospitals and other first responders.

Fourth, we must test all nursing home workers and residents for active infections, using RT-PCR tests and other FDA-authorized methods of detection.

Fifth, we must strive wherever possible to ensure that nursing home staff are working at a single facility; it is likely that staff working at multiple facilities are helping to spread the infection. Infected nursing home workers and residents should be quarantined at an off-campus facility. States could contract with now-empty hotels to assist with this process.

Sixth, the eleven states that thus far have refused to report COVID nursing home deaths—Alaska, Hawaii, Utah, Wyoming, New Mexico, North Dakota, South Dakota, Kansas, Missouri, Michigan, and Vermont—need to start reporting their death tolls in long-term care facilities. The federal government has instituted such a requirement for nursing home deaths occurring after May 5, but as Ohio teaches us, it is also important to get the data from the previous several months.

Michigan, in particular, has had a significant outbreak of COVID-19, and Gov. Gretchen Whitmer recently extended the state’s economic lockdown through June 12. Transparency into fatalities at long-term care centers in Michigan is essential for assessing the wisdom of her policy.

The optimistic take: Those outside of nursing homes are at lower risk

There is one silver lining—or perhaps bronze lining—to the COVID long-term care tragedy. The fact that nearly half of all COVID-19 deaths have occurred in long-term care facilities means that the 99.4 percent of the country that doesn’t live in those places is roughly half as likely to die of the disease.

Risk of death from COVID-19 is concentrated in the elderly.

Many European countries have struggled with the same nursing home problems that we have. But based on the mounting evidence that serious illness from COVID-19 is concentrated in the elderly, Switzerland and Germany have reopened their primary and secondary schools. Sweden, for the most part, never closed them to begin with. Germany has kept most of its factories in operation, and Sweden’s restaurants remain open. All of these countries have stable-to-declining rates of hospitalization and death from COVID-19.

The results in these countries should give us increased confidence that measured steps to reopen the economy can work here.

State governments bear much more of the responsibility for the depth of the COVID-19 pandemic than many Americans appreciate. But that also means that states have the opportunity to learn from their own mistakes and do the right thing: by protecting vulnerable seniors, and letting millions of Americans get back to work.

Published in Coronavirus, US News and World News