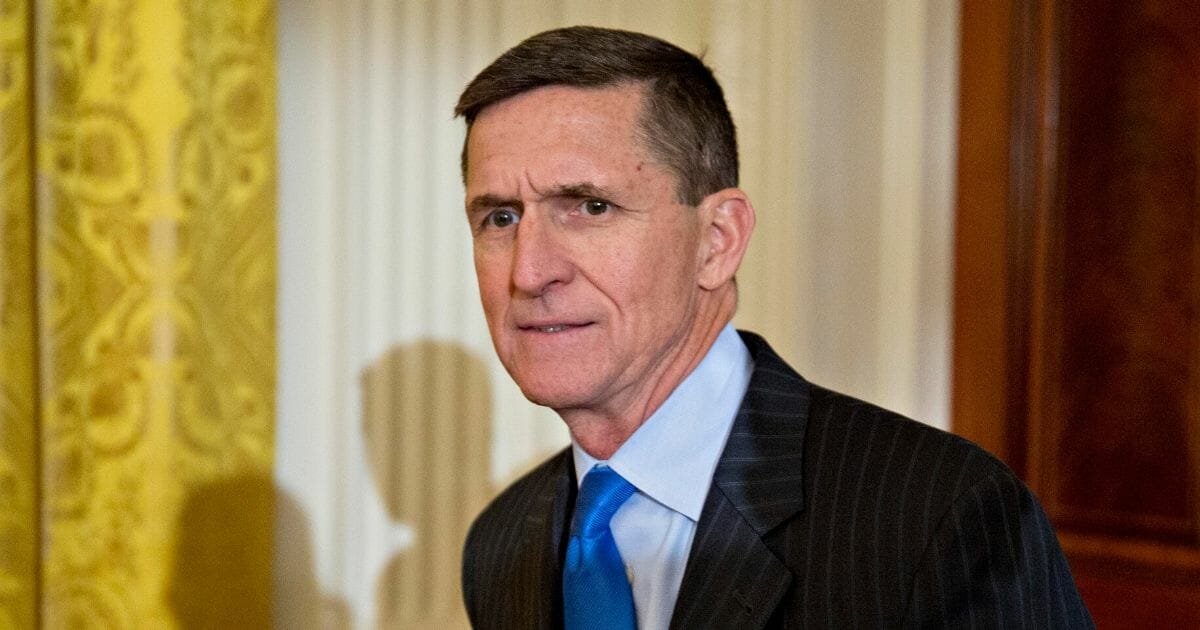 'Flynn remained on the Obama administration’s radar, his past and…

Long before he met Donald Trump in August 2015, Lieutenant General Michael Flynn was a man marked by the Obama administration.

To them, he was a dangerous ticking bomb because of his deep intelligence knowledge and his outspoken opposition to President Obama’s cavalier attitude toward the resurgent threat of terrorism as represented by the rise of the Islamic State.

Already under the watchful eyes of U.S. and British intelligence for his contacts with Russians, Flynn’s initial meeting with Trump triggered a cascade of events that would eventually lead to Flynn’s coerced guilty plea for lying to the FBI and the entire Trump-Russia collusion hoax investigation.

In August 2012, during Flynn’s tenure as director, the Defense Intelligence Agency released an internal, classified report predicting the rise of the Islamic State in Iraq and Syria.

Just three months before the 2012 election, candidate Obama did not want to hear that the war in Iraq was about to reignite thanks to his troop withdrawal and that al-Qaida in Iraq (now ISIS) was on the rise after declaring at the Democratic National Convention that he had “end[ed] the war in Iraq” and put “al-Qaida … on the path to defeat.”

Even as late as January 2014, Obama was still ignoring the threat, famously referring to the Islamic State as the “JV team.”

Punished for being correct, Flynn was removed from his position as DIA Director and forced into early retirement from the military on Aug. 7, 2014, ironically the day Obama announced that U.S. warplanes had begun bombing Islamic State targets, and U.S. troops would soon be dispatched back to Iraq.

Flynn, however, remained on the Obama administration’s radar screen, his past and occurring interactions with Russians being carefully logged by U.S. and British intelligence.

That surveillance would later provide “evidence” of Russian collusion including Flynn’s attendance at a December 2015 dinner in Moscow to celebrate the 10th anniversary of the Kremlin-linked English-language news service RT, where he was seated next to Vladimir Putin.

The key and earliest known connection to the Trump-Russia collusion hoax, however, occurred in February 2014, six months before Obama fired him as DIA Director.

Flynn had traveled to England to speak at the Cambridge Intelligence Seminar. It was at that event that individuals, who eventually became key figures in the Russia hoax, appeared, such as Stefan Halper and Sir Richard Dearlove.

According to Chuck Ross of The Daily Caller:

“Dearlove, who served as chief of MI6 from 1999 to 2004, had contact during the 2016 [U.S. Presidential] campaign with dossier author Christopher Steele. He is also a close colleague of Stefan Halper, the alleged FBI and CIA informant who established contact with several Trump campaign advisers. Dearlove and Halper attended a Cambridge political event in July 2016 where Halper had his first contact with Trump campaign adviser Carter Page.“

The actual inflection point came in early 2016 when the Obama administration’s vendetta against Flynn and his alleged Russian sympathies evolved into the Trump-Russia collusion hoax after Trump piled up primary victories.

It was long before George Papadopolous arrived on the scene, the individual often cited by the Deep State as the trigger for the Russia collusion investigation, in particular his meeting with Australian diplomat Alexander Downer in May 2016 in which “damaging material” about Hillary Clinton held by the Russians was allegedly discussed.

The formation of CIA Director John Brennan’s inter-agency Trump task force, which was immediately leaked to the BBC, much to Brennan’s consternation, coincided with Flynn becoming a foreign policy advisor to the Trump campaign as described by a Reuters article on Feb. 27, 2016, titled “Trump being advised by ex-U.S. Lieutenant General who favors closer Russia ties.”

That Brennan-led task force included not only U.S. intelligence agencies, but likely also foreign services such as Britain’s CIA, MI6, and its National Security Agency equivalent GCHQ, which had access to NSA’s database of recorded telephone conversations and emails.

No doubt, Brennan’s task force employed the services of a network of intelligence freelancers located in Europe, some of whom seem to have had connections with the British secretive strategic intelligence and advisory firm, Hakluyt, founded by former MI6 members and retaining close ties to British Intelligence services.

Those allegedly connected to Hakluyt are Stefan Halper, Sir Richard Dearlove, Alexander Downer and John Brennan, who was photographed meeting with Hakluyt personal in 2018.

Hakluyt’s top executives come from MI6 and it has retired GCHQ officials as board members. Perhaps coincidentally, listed on the board of Hakluyt’s parent company, Holdingham, is Louis Susman, formerly Obama’s ambassador to Great Britain, a major fundraiser for Democratic presidential candidates and reportedly a close friend of Hillary Clinton.

The scheme appears to have involved foreign sources in an artificial feedback loop, gathering unsubstantiated information to support the Russian collusion hoax or feeding back planted CIA information that could then be “legitimately” passed on to the FBI to generate a counterintelligence investigation, where Trump personnel or Trump himself could be interrogated.

Parallel coordination with sympathetic media outlets was an obvious additional option. It is not unlike a disreputable journalist providing disinformation to another journalist, then using that story as verification of his preconceived notions.

Another peculiarity of the Flynn saga occurred during the first meeting between then-President Obama and President-elect Donald Trump held within 48 hours after the 2016 election. Among all the critical national security issues that could have been discussed, Obama offered two pieces of advice, one regarding North Korea and the other an oddly out-of-place personnel employment recommendation — don’t hire Michael Flynn.

The rest is history.

Seeing the indictment of Flynn, Trump’s national security advisor, as the first step towards impeachment, the Deep State applied unscrupulous, if not illegal, tactics to coerce a guilty plea.

In December 2017, Flynn did plead guilty to charges that he lied to the FBI about his contacts with Russian Ambassador Sergey Kislyak in what many regard as an “ambush” interview conducted by Peter Strzok, who was later fired from Special Counsel Robert Mueller’s investigative team.

Now it appears that the FBI may have tampered with the notes from his 2017 interview, during which they claim Flynn lied.

The time is long past that the case against Lieutenant General Michael Flynn be dismissed and the real Deep State perpetrators of entrapment and criminal conspiracy be investigated.