The ANC and Ramaphosa’s 1994 plan for the whites 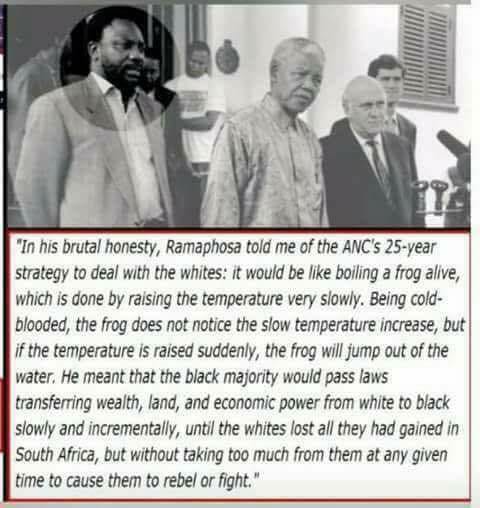 Cyril Ramaphosa and the story of the frogs in the water

In recently published memoirs, one of Cyril Ramaphosa’s main opponents pays generous tribute to his character and negotiating skills during the talks leading up to the new South African constitution and the election in 1994.

Dr Mario Oriani-Ambrosini, who died in 2014, was a constitutional lawyer who became an  MP. He was also a key adviser to Prince Mangosuthu Buthelezi both during the negotiations and afterwards when the latter was minister of home affairs in the governments of national unity. His memoirs – the Prince and I: A South African Institutional Odyssey – are published this year by his estate.

According to the memoirs, Mr Ramaphosa, “stood head and shoulders above his colleagues” in the African National Congress (ANC) as well as above the National Party’s negotiators. He was a “born leader” and a “straight shooter”. Nor did he ever lie or “misrepresent anything”.

What then are we to make of this paragraph in Dr Oriani-Ambrosini’s intriguing memoirs?

“In his brutal honesty, Ramaphosa told me of the ANC’s 25-year strategy to deal with the whites: it would be like boiling a frog alive, which is done by raising the temperature very slowly. Being cold-blooded, the frog does not notice the slow temperature increase, but if the temperature is raised suddenly, the frog will jump out of the water. He meant that the black majority would pass laws transferring wealth, land, and economic power from white to black slowly and incrementally, until the whites lost all they had gained in South Africa, but without taking too much from them at any given time to cause them to rebel or fight.”

Since then Mr Ramaphosa has had a great deal else to say. He said recently that “radical economic transformation” required policies with an “over-riding focus on the creation of jobs”. Policies that “do not create jobs – or that threaten jobs – must be reviewed and revised.” This thinking is incompatible with expropriation of all white “wealth, land, and economic power”.

Mr Ramaphosa recently told the South African Communist Party (SACP) that “far higher levels of fixed investment” were necessary to achieve growth and create employment on a massive scale. Such investment would not be forthcoming in the context of the mass expropriation of white property of which he spoke to Dr Oriani-Ambrosini. Investors are already extremely wary.