Taliban Confident It Will Replace Afghanistan Leaders with ‘Islamic Government’ 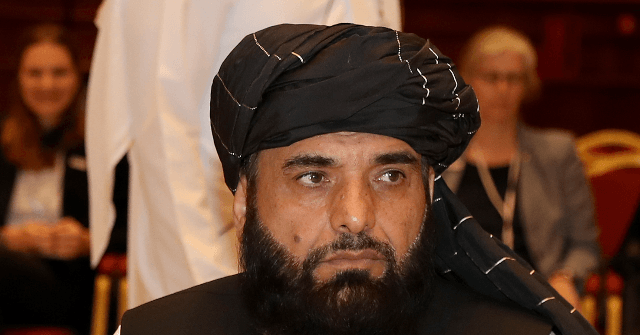 Taliban Confident It Will Replace Afghan Leaders with 'Islamic Government'

Representatives of the Taliban meeting with Iranian officials in Tehran declared Tuesday that peace talks between the group and the United States would lead to the end of the current Afghan government and the imposition of a more “Islamic” regime, a condition Washington has rejected since the talks began.

Afghanistan is already an Islamic republic, run partially through sharia, or Islamic law. The Taliban considers itself the only legitimate government of Afghanistan and formally refers to itself as the “Islamic Emirate of Afghanistan,” rejecting the existence of Afghanistan’s entire government infrastructure. After nearly two decades of war since the United States invaded in the early 2000s, Taliban representatives agreed to negotiations in Doha, Qatar, where it has established a political office.

Under the administration of President Donald Trump, the United States sought a full withdrawal of its military from the country in exchange for an agreement on the part of the Taliban that it would stop harboring terrorists from international jihadist groups like al-Qaeda and that it would stop attacking U.S. forces. This week, the new administration of President Joe Biden accused the Taliban of not abiding by its agreements and expressed doubt Washington would be able to keep its deadline of leaving the country by May.

Amid the discord, the Taliban sent representatives to Tehran, looking for a potential ally to strengthen their negotiating leverage.

“Based on the agreement, (US-Taliban peace agreement), this government will be dissolved and another government will be formed based on the intra-Afghan negotiations,” Taliban negotiator Suhail Shaheen said Tuesday, according to Afghanistan’s Tolo News, “regarding this issue, we have had some trips to the Islamic Republic of Iran and Russia.”
Khaama Press, another Afghan outlet, quoted Shaheen and his fellow negotiators declaring that, after the conclusion of peace talks with America, “Afghanistan’s new Islamic government will emerge.”

“Suhail Shaheen added Taliban’s agreement with the United States is that a new Islamic government would be formed, meaning that the current government would be overthrown, and it will occur as a result of Intra-Afghan peace talks,” Khaama reported. No U.S. officials have claimed that this is the case and have actively expressed support for the government in Kabul. Secretary of State Antony Blinken spoke to the president of Afghanistan, Ashraf Ghani, this week to express commitment to protecting the current government structure.

“The Secretary highlighted robust diplomatic support for the peace process focused on helping the parties to the conflict achieve a durable and just political settlement and permanent and comprehensive ceasefire that benefits all Afghans,” the State Department said in its statement on the call. “[Blinken] shared that the United States is reviewing the February 2020 US-Taliban agreement and whether the Taliban are living up to their commitments to cut ties with terrorist groups, to reduce violence in Afghanistan, and to engage in meaningful negotiations with the Afghan government and other stakeholders.”

In remarks to Breitbart News in September, former Secretary of State Mike Pompeo highlighted tensions between Kabul and the Taliban as the “central challenge” to long-lasting peace in the country.

“In the end, the central challenge is what will the Afghan government look like,” Pompeo said. “What will be the power-sharing arrangement? This is a challenge anytime you have throughout history insurgencies and other times when nations have civil strife. … there will be issues of power-sharing and how the government is established at the center of the conversation.”

The Afghan government responded to the Taliban’s remarks by claiming that any discussion of changing the government of Afghanistan was “premature.”

“Before talking about the system, the Taliban should stop shedding the blood of inhabitants of this country, it is premature to talk about the system,” Rahmatullah Andar, a spokesman for Afghanistan’s Office of National Security Council (ONSC), said in response.

The Pentagon warned last week that the Taliban had increased attacks in Afghanistan and that its disposition towards the peace deal had prompted concern that they would betray it.

“We are still involved in trying to get a negotiated settlement. The Taliban have not met their commitments,” John Kirby, a spokesman for the Pentagon, said. “Without them meeting their commitments to renounce terrorism and to stop the violent attacks on the Afghan national security forces, and by dint of that the Afghan people, it’s very hard to see a specific way forward for the negotiated settlement.”

Kirby added that American troops could not withdraw from the country if the Taliban did not stick to the commitments negotiated in Qatar in September.

A week prior, the U.S. Treasury issued a statement saying it had reason to believe that the Taliban was still cooperating with al-Qaeda, a direct violation of its peace commitments.

Tolo News reported on Tuesday that both the Taliban and the Islamic State, rivals to the Taliban in the country, “have increased targeted assassinations outside of Kabul” and that, within the capital, the Taliban had become more violent, citing the U.S. Afghanistan watchdog office, the Special Inspector General for Afghanistan Reconstruction (SIGAR).