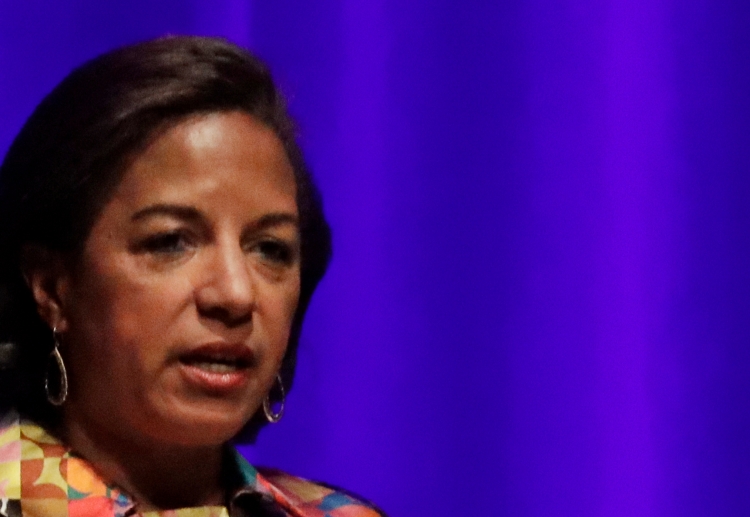 Susan Rice, the vice presidential contender with a high-profile history…

Susan Rice, the vice presidential contender with a high-profile history of questionable public statements, has another dubious claim in her past that until now has escaped scrutiny. Rice swore under oath that as President Obama’s national security adviser she was never told about the FBI’s Trump-Russia investigation. But former FBI Director James Comey testified that Rice was present when he informed Obama all about Crossfire Hurricane just weeks after the investigation was launched.ealclearinvestigations.com

The contradiction could lead to charges that Rice lied to Congress about a topic still of intense interest to investigators: How actively involved in the effort to spy on the Trump campaign was the inner circle of the Obama White House, including the president himself? More immediately, the question of whether Rice told the truth on Capitol Hill might damage her bid to join Joe Biden on the Democratic presidential ticket.

Rice earned a reputation for shading the truth after the 2012 terrorist attack on the U.S. consulate in Benghazi, Libya. She was famously dispatched to five different Sunday morning news shows to repeat false talking points: that the mob that killed four Americans – including Ambassador to Libya Christopher Stevens – was merely reacting to an obscure YouTube video mocking Islam.

Questions about her forthrightness were redoubled when Senate investigators found that, in the waning minutes of the Obama administration, Rice wrote a curious “memo to the file.” She sent an email to herself on the day of Donald Trump’s inauguration, and in it claimed that Obama had insisted that everything to do with Russia, whether law enforcement or counterintelligence, be done “by the book.”

Asked about that memo later, Rice insisted she knew nothing about the FBI’s counterintelligence probe regarding Trump and Russia, let alone anything that could be characterized as spying on the incoming administration. She had her lawyer, Kathryn Ruemmler, write a letter to Sens. Charles Grassley, Dianne Feinstein, Lindsey Graham, and Sheldon Whitehouse. “While serving as National Security Advisor, Ambassador Rice was not briefed on the existence of any FBI investigation into allegations of collusion between Mr. Trump’s associates and Russia,” Ruemmler wrote, “and she later learned of the fact of this investigation from Director Comey’s subsequent public testimony” – testimony that didn’t occur until March 20, 2017

On Wednesday, September 8, 2017, Rice repeated that she knew nothing of the FBI’s investigation while in the White House. This time she made the claim under oath.

Rice was at the Capitol, sitting in a secure room used by the House Permanent Select Committee on Intelligence. The official reason for the interview was to ask what the Obama administration had done to thwart Russian efforts to interfere in the 2016 presidential election. Behind those questions was a different query: Had Barack Obama’s team used the power of the presidency to spy on and smear the Trump campaign?

With the expectation of facing unfriendly questions, Rice arrived with two attorneys from the law firm Latham & Watkins.

The Republican staffer running the interview emphasized to Rice the importance of telling the truth: “You are reminded that it is unlawful to deliberately provide false information to members of Congress or staff.” She was asked to raise her right hand and take an oath: “Madam Ambassador, do you swear or affirm that the testimony you’re about to give is the truth, the whole truth, and nothing but the truth?”

The Democrats at the interview weren’t looking to trip Rice up. But it was questions from two California Democrats in the room that Rice may regret. Rep. Adam Schiff cited the former head of the FBI: “Director Comey testified that, in July of last year [2016], he began a counterintelligence investigation into people associated with the Trump campaign and what contacts they may have had with Russia.

“That investigative responsibility,” Schiff asked Rice, “wasn’t part of your portfolio, I take it?”

“And would Director Comey brief you on the progress of his investigation?”

“No,” said Rice. And then she elaborated. “I think it’s important for everybody to understand: We were not informed by Director Comey or the attorney general that there was an active investigation of anybody in the Trump orbit,” she said. “[I]n the Obama White House, we maintained scrupulously the firewall between people in the While House and contacts with Justice about potential or actual criminal matters. The only communication that was sanctioned in that vein was between the White House counsel and the Justice Department or the FBl.”

If that weren’t definitive enough, Rice added, “And Director Comey did not volunteer to us, not only then but through the duration of the administration, that there was an active investigation of anybody in the Trump orbit. I knew he was looking at this issue, that he was concerned about it. But he never specifically shared with me or others, to my knowledge, that such an investigation was ongoing. And I learned about it formally in the public domain after I left office.”

A little later in the closed-door Capitol Hill interview, Democratic Rep. Eric Swalwell came back to the question that Rice had already answered so definitively: “Speaking of investigations, you talked about Director Comey and the FBl,” Swalwell said to Rice. “ls it fair to say that, as the national security adviser, you were not read in on active, ongoing investigations that the Department of Justice or the FBI were conducting?”

If Rice were concerned that she might have misspoken earlier, she was presented with the opportunity to correct her testimony. She didn’t take it.

Rice’s testimony took place two years before the inspector general for the Justice Department, Michael Horowitz, released his report on the origins of the FBI’s Trump-Russia investigation. In that report is an admission from James Comey that contradicts Rice’s sworn statements. According to testimony obtained from Comey by Horowitz, the Obama team knew about the FBI’s investigation from nearly the start, and in detail. 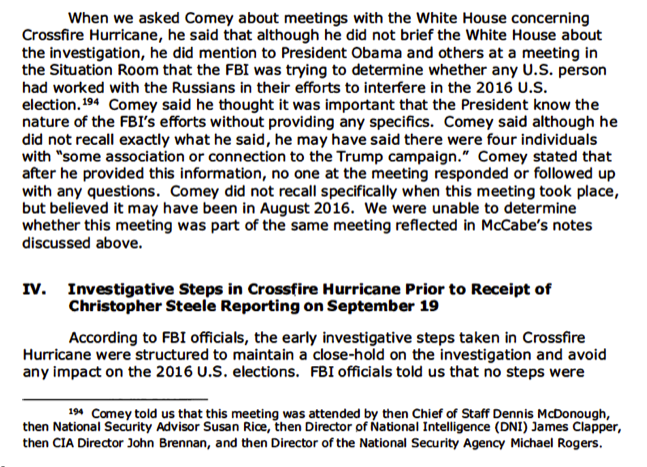 Above, a footnote from the IG report undercuts Rice’s claim of no knowledge of Crossfire Hurricane.
DoJ Office of the Inspector General
“Crossfire Hurricane,” as the counterintelligence investigation was called, was officially launched at the end of July 2016. Sometime in August – just weeks into the secret, “close-hold” probe – Comey was at the White House for a meeting, he told Horowitz.

“When we asked Comey about meetings with the White House concerning Crossfire Hurricane” Horowitz writes, the former FBI director said “he did not brief the White House about the investigation.”

Comey may not have considered it an official “briefing” but that doesn’t mean he didn’t share the information. Comey told Horowitz that in August 2016 “he did mention to President Obama and others at a meeting in the Situation Room that the FBI was trying to determine whether any U.S. person had worked with the Russians in their efforts to interfere in the 2016 U.S. election.”

Comey claimed that he wasn’t eager at that White House meeting to share specifics of the inquiry, but he had done so nonetheless. “[A]lthough [Comey] did not recall exactly what he said,” Horowitz writes, “he may have said there were four individuals with ‘some association or connection to the Trump campaign.’” This revelation failed to strike anyone at the meeting as remarkable: “Comey stated that after he provided this information, no one in the Situation Room responded or followed up with any questions.”

Who were the strangely incurious officials who remained mum when they were told four individuals associated with the Trump campaign were being investigated on suspicion of conspiring with Russians to interfere in the election? Comey provided Horowitz with a list of those at the meeting. The inspector general shares that list in footnote 194 to his report: President Obama was there, as well as his chief of staff, Dennis McDonough; also present were James Clapper, John Brennan, Michael Rogers and Susan Rice.

So Rice was among those told by James Comey about Crossfire Hurricane within weeks of the investigation’s launch. Yet she told the House Intelligence Committee under oath that “I think it’s important for everybody to understand: We were not informed by Director Comey or the Attorney General that there was an active investigation of anybody in the Trump orbit.”

Reached by RealClearInvestigations, Rice spokesperson Erin Pelton said that Rice’s testimony was true: “As Ambassador Rice wrote in her book and stated to Congress, she was not briefed by the FBI or the Department of Justice on the existence of an FBI investigation into allegations of collusion between Mr. Trump’s associates and Russia, nor was she informed of any FISA applications sought by the FBI in its investigation.” Pelton said Rice “only learned of the fact of this investigation after leaving office, when FBI Director Comey testified before Congress to that effect.”

The spokesperson offered no comment, however, about Comey’s assertion to the inspector general that he had told Obama, Rice, and the others about Crossfire Hurricane shortly after the investigation’s launch in the summer of 2016.

Published in FBI, Political News, Russia, Russian Intervention in US Elections, Trump and US News