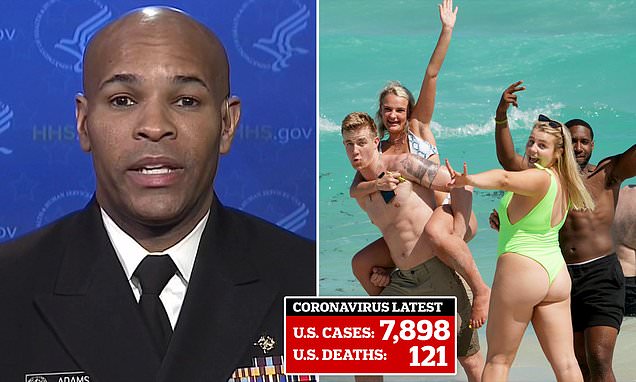 Surgeon General; It may take longer than 15 days to slow coronavirus

Jerome Adams appeared on Today to make the plea, a…

The Surgeon General warned on Wednesday that it could take longer than 15 days to slow the spread of coronavirus but that Americans must ‘pitch in’ and do their part now to stay home and self-isolate if they want the deadly disease to die.

Jerome Adams appeared on Today to make the plea, a day after President Trump issued a 15-day set of guidelines to people to work from home where possible and practice social distancing.

Millions have heeded the advice and are avoiding going out. Some, like in cities where the pandemic spreading the quickest, are calling for harsher action, like a two-week national shutdown to force people indoors.

On Tuesday, startling new data revealed that as many as 2million Americans may die if no further action is taken but that making people self-isolate now for 18 months could cut that figure to 200,000.

There has not been a clear cut answer on how long Americans will have to continue living in this current state of crisis.

New York City Mayor Bill de Blasio has said the current state of crisis could last nine months, whereas experts overseas say it could even longer.

On Wednesday morning, Adams said that the practical advice for Americans was to stay at home for the next 15 days and avoid social gatherings but it would ‘likely’ take longer to stunt the spread of the virus.

‘If we can get America to pitch in for the next 15 days, we can flatten the curve.

‘Fifteen days is likely not going to be enough to get us all the way through, but we need to lean into it now to bend the curve over the next 15 days and at that point we will reassess.

‘What you’re talking about is our 15 days to stop the spread.

“How long do you think people should expect to be at home?” @savannahguthrie to @Surgeon_General pic.twitter.com/1azpPyZZDs

‘We want them to avoid gatherings of 10 or more, unnecessary travel, work from home if at all possible.

‘When we look at the data, our numbers are where Italy’s are two to three weeks ago.

Adams said he felt the nation was ‘turning a corner’ in the amount of people taking the virus seriously.

‘We’re starting to turn a corner. People really are [sensing the urgency].

‘They don’t care what dad says, even if he is the surgeon general, but by golly do they know that Kevin Durant just got diagnosed with the coronavirus and they’re taking it seriously,’ he said, referring to the Brooklyn Nets player who, along with three teammates, has the virus.

‘We want people to understand; chances are you don’t have it and chances are if you do have it you will recover.

Published in Coronavirus, Health News, Opinion, Trump and US News