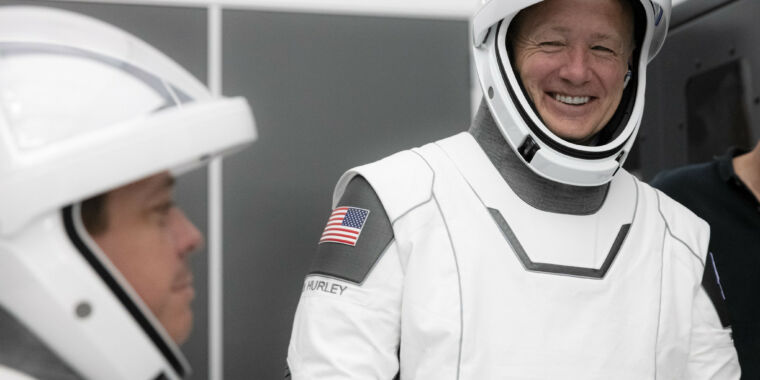 NASA and SpaceX must still clear some hurdles.

NASA and SpaceX must still clear some hurdles

On Friday, NASA Administrator Jim Bridenstine announced that the space agency has set a launch date for the first human launch to orbit from the United States in nearly a decade.

SpaceX’s Crew Dragon will launch on May 27 aboard a Falcon 9 rocket from Kennedy Space Center, at 4:32pm ET (20:32 UTC). This test flight will carry NASA astronauts Doug Hurley and Bob Behnken to the International Space Station for a multi-month mission—as long as 110 days but probably less.

The flight will have a nice symmetry with the last human orbital launch from US soil, which occurred on July 8, 2011 with the final flight of the space shuttle. Hurley served as pilot on that spaceflight, which lasted nearly 13 days and delivered supplies to the station. For the Dragon test flight, Hurley will be “spacecraft commander,” whereas Behnken will be “joint operations commander.” Effectively this means that Hurley commands the vehicle when in flight.

NASA and SpaceX must still clear some hurdles before the mission takes place, so this launch date may well slip to the right. But the fact that the space agency has published a date lends confidence to a crew launch from the United States within two to three months.