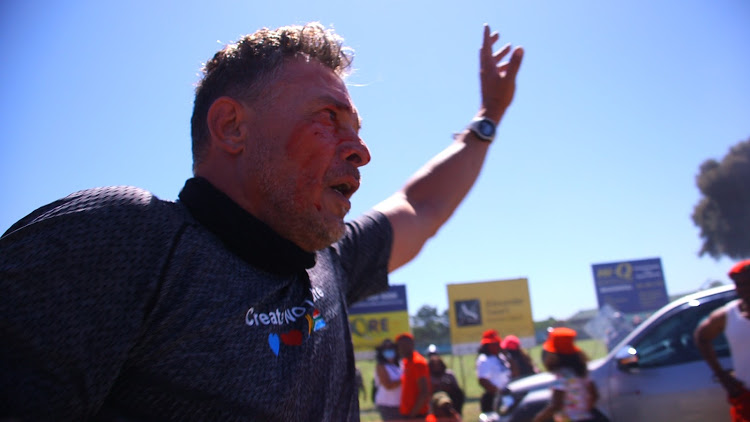 BY ARON HYMAN AND ANTHONY MOLYNEAUX

During a speech by EFF Secretary General Marshall Dlamini in Brackenfell on November 20 2020, a white man entered the EFF protest against alleged racism at Brackenfell high school. The man was subsequently assaulted by dozens of EFF supporters using fists, bottles and sjamboks.

A white man was assaulted by dozens of EFF members on Friday after he moved forward through a crowd to address the party’s secretary-general, Marshall Dlamini. 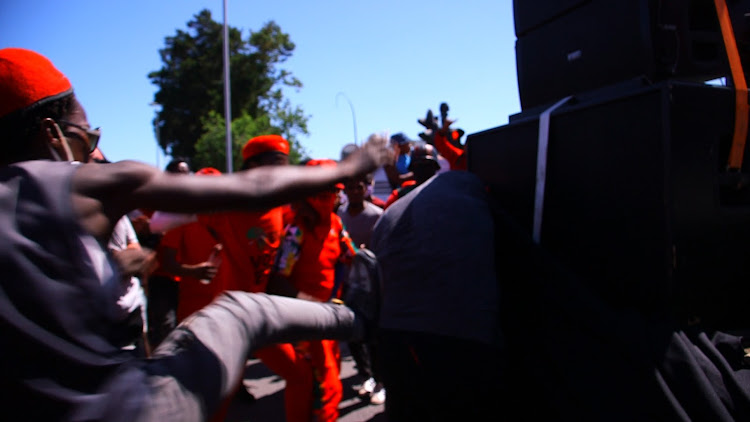 An EFF protester aims a kick at the Lycra-clad mad who tried to interrupt party secretary-general Marshall Dlamini outside Brackenfell High School in Cape Town on November 20 2020.
Image: Anthony Molyneaux

The man, dressed in cycling gear, tried to address Dlamini at the climax of a rousing speech outside Brackenfell High School in Cape Town’s northern suburbs.

Dlamini asked him: “What is your problem? What is your f****** problem?”, then one demonstrator pushed the main in the back before a group set on him. 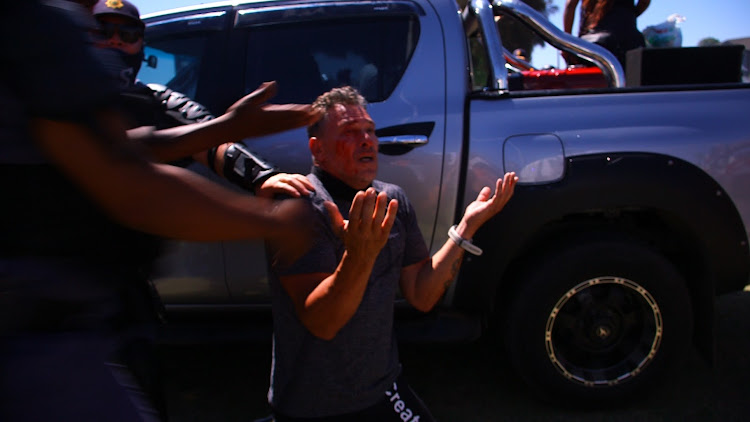 Public order police rescued the man who was set on by EFF protesters after he tried to interrupt party secretary-general Marshall Dlamini outside Brackenfell High School in Cape Town on November 20 2020.
Image: Anthony Molyneaux

The man’s intervention came as Dlamini said he was giving the police one hour to return an EFF beret he claimed was stolen when demonstrators were attacked by counter-protesters.

EFF marshals attempted to rescue the man, who was wearing cycling pants and a shirt which read “create not hate”, then police used stun grenades to disperse the crowd.

Chaos then ensued for a third time on Friday as protesters responded to stun grenades, water cannon and teargas with a volley of rocks.

EFF leaders were forced to hide behind speakers as they ducked for cover.

The man ended up on his knees, raising his hands to the sky and shouting, “God! God! God! I don’t want to fight any more”.

He was then escorted into a police van and appeared to have been taken into safe custody.

EFF have arrived in numbers. After a run in with police (there's water canons here) they assemble in the road. Police are trying to maintain order here in Brackenfell. About 500 EFF supporters here. @TimesLIVE @SundayTimesZA pic.twitter.com/UBBYG5Udy8

Dlamini was speaking about the evils of white racism after a two-week row over a matric function attended only by white pupils at Brackenfell High.