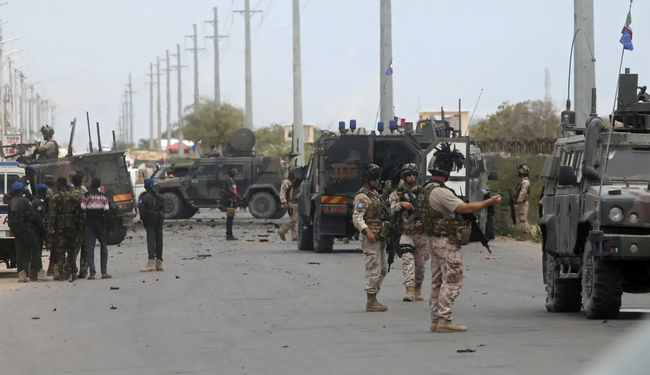 "It implies they have a high intelligence and a degree…

A US special forces military base that’s also used to launch drone strikes on Al Qaeda and ISIS factions active in North Africa was attacked by a band of Somali insurgents on Monday, who also carried out an attack on a European military convoy, the AFP and Reuters report.

The American base, reportedly located in the town of Baledogle, was hit with an explosive, followed by small arms fire. The base is located about 60 miles west of Mogadishu, the Somali capital. It was unclear whether anybody was seriously injured during the attack.

The militant group Al Shabaab took credit for the string of attacks, and issued a statement about the raid on the American base.

“In the early hours of Monday morning, an elite unit of soldiers from Harakat al-Shabaab al-Mujahideen Martyrdom Brigade launched a daring raid on the US military base…After breaching the perimeters of the heavily fortified base, the Mujahideen (holy warriors) stormed the military complex, engaging the crusaders in an intense firefight.”

In a separate attack, a convoy of EU advisers training recruits to the Somali national army were struck by a car bomb in Mogadishu. Italian government officials insisted that nobody was seriously injured, though a Reuters journalist later saw a badly damaged military vehicle bearing an Italian flag.

“There was a car bomb targeting the EU military advisers along the industrial road. A vehicle loaded with explosive was rammed on to one of the convoy vehicles and there are casualties,” said Omar Abikar, a Somali security officer.

Published in Military, Political News, US News and World News