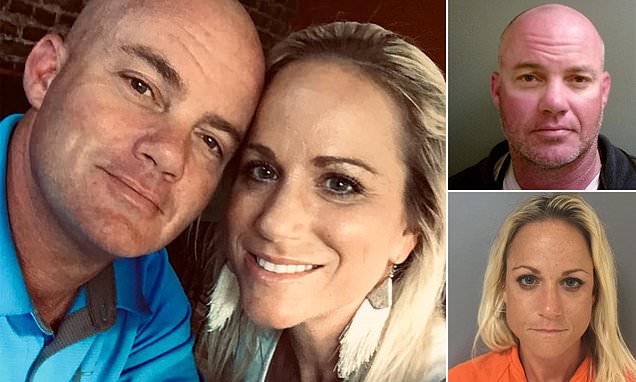 Dennis Perkins, 44, and Cynthia, 34, were arrested in Livingston…

A sheriff’s deputy and his wife, a junior high school teacher, have been arrested on child rape and pornography charges after police seized a photo of the pair naked with a minor.

Dennis Perkins, 44, and Cynthia, 34, were taken into custody yesterday in Livingston Parish, Louisiana.

He was immediately removed from his job as a lieutenant with the Livingston Parish Sheriff’s Office where he has worked since 2002 and she resigned from her junior high school in Walker.

Cynthia was charged with 60 counts of making pornography with a child and two counts of rape.

Dennis, known as Denny, was also charged with obstruction of justice after allegedly throwing his phone into a river when he discovered investigators were about to arrest him while he was on a fishing trip.

The investigation was prompted by a tip from the National Center for Missing and Exploited Children.

Sheriff Jason Ard said in a statement: ‘It’s a sad day for us, for all law enforcement officers, when you arrest one of your own… but as I have said in the past, no one is above the law.’

It is not yet known how many children may have been victims of the couple.

Louisiana Attorney General Jeff Landry said: ‘Protecting Louisiana children is one of my top priorities, so my office and I will continue to do all we can to find and arrest child predators.’