Screaming Mary goes down with C-virus: Iran’s vice president – who ranted nightly during 1979 US embassy hostage – is diagnosed a day after sitting with President Rouhani, as virus kills top diplomat 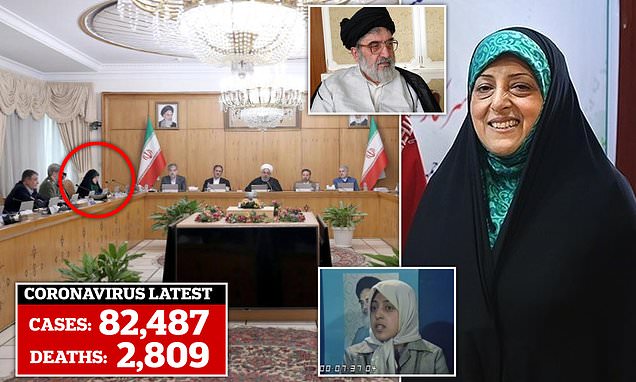 Iran's VP and spokeswoman for 1979 hostage infected with coronavirus

Masoumeh Ebtekar, a vice president in Iran and a spokeswoman…

An Iranian vice president who was a spokeswoman for the 1979 hostage-takers during the US embassy crisis has been infected with the new coronavirus.

Masoumeh Ebtekar, regarded as the most powerful woman in Iranian politics, was said to have contracted the infection this week, according to local media.

She was seen sitting near President Hassan Rouhani during a meeting of Iranian cabinet members yesterday. Ebtekar’s case was said to be mild and she has not been admitted to hospital.

She became known as Screaming Mary during the 1979 US embassy crisis in Tehran when she acted as an English-speaking spokesman for the hostage takers.

Her diagnosis comes as it emerged today that Iran’s former ambassador to the Vatican, Hadi Khosroshahi, died of coronavirus.

News of Ebtekar’s infection was published today by the English-language IRAN state-owned daily newspaper via its Twitter account.

Ebtekar was known as ‘Mary’ and also ‘Screaming Mary’ for her nightly televised rants against American imperialism throughout the 1979 US embassy hostage crisis in Tehran.

She was the English-language spokeswoman for Iran when ‘students’ seized the US Embassy in Tehran and sparked the 444-day diplomatic crisis in November 1979.

Ebtekar is currently the Iranian vice president for Women and Family Affairs.

The report of Ebtekar’s diagnosis comes as other top officials in Iran’s Shiite theocracy have caught the virus.

Earlier today the head of Iran’s parliamentary security and foreign relations commission, Mojtaba Zonnour, announced he had also tested positive for the virus.

This week the country’s Deputy Health Minister, Iraj Harirchi, plus two MPs said they had been infected and were under quarantine.

Harirchi’s diagnosis was an embarrassment for the regime after he had insisted a day earlier – while sweating heavily at a press conference – that the outbreak was not as bad as feared.

Iran is the hardest-hit nation in the Mideast, where Health Ministry spokesman Kianoush Jahanpour on Thursday reported 26 deaths out of 245 confirmed cases of the illness.

The republic’s death toll is the highest outside of China, where the outbreak began in December and has seen more than 82,000 cases worldwide and over 2,800 deaths.

Experts are concerned Iran may be under-reporting cases and deaths, given the illness’ rapid spread from Iran across the Persian Gulf.

Jahanpour seemed to address that, saying new labs in Iran were conducting tests and the number of confirmed cases could continue to spike in coming days. Thursday’s number represented a jump in over 100 new cases from the previous day.

The health minister called on Iranians to avoid ‘unnecessary trips inside the country’.

Ebtekar was a 20-year-old medical student who became the face of Iran’s government across the Western world during the hostage crisis.

The diplomatic standoff began on November 4, 1979, less than nine months after the toppling of Iran’s American-backed shah.

Students overran the the US embassy in Tehran to demand America hand over the ousted ruler after he was admitted to a hospital in the States.

It took 444 days for the crisis to end with the release of 52 Americans, but the US broke off diplomatic relations with Iran in 1980 and ties have been frozen ever since.

Despite her past, Ebtekar was a firm supporter of her government’s efforts to rebuild ties with the West through the 2015 nuclear deal, she said in a 2016 interview.

Regarded as the most powerful woman in Iranian politics, Ebtekar is seen as a moderate in the reformist government of President Rouhani.

She previously headed Department of Environment from 1997 to 2005, making her the first female member in the cabinet of Iran since 1979 and only the third in history.

Later she became the head of the Environment Protection Organization of Iran during the administration of President Mohammad Khatami and was a city councilwoman of Tehran from 2007 to 2013.

Ebtekar’s father studied in the US at the University of Pennsylvania and she lived with her parents in Upper Darby, Pennsylvania, just outside Philadelphia.

During her six years in Philadelphia, she developed ‘near-perfect American-accented English’.

Returning to Iran she enrolled in Iranzamin, or Tehran International School, and after graduation became a supporter of the political Islam of Ali Shariati and began wearing a traditional black chador covering everything except her face.

But her eventual move from radical to reformist is not a contradiction, Ebtekar said, describing the revolution’s core principles in a Times interview as ‘ideals that never change’.

She said she regretted the isolation that followed the 1979 crisis, but remained unrepentant, saying that the students had been convinced the US was preparing a coup to reverse the revolution.

Ebtekar told Al Jazeera in an interview last year: ‘I don’t think any of the students have any regrets because they felt that was a natural reaction.

Over the decades, some politicians on both sides have wanted to move on, most notably Iran’s former reformist President Khatami, and President Trump’s predecessor, Barack Obama.

But the crisis scarred the psyches of both the US and Iran and had repercussions for relations between the two nations up to the present period of heightened animosity.

Ebtekar told KhabarOnline news agency last year: ‘The incident certainly had a cost, but the cost was less than its benefit.’

On Thursday, as fears of the spread of coronavirus gripped the world, Saudi Arabia banned foreign pilgrims from entering the kingdom to visit Islam’s holiest sites, potentially disrupting the plans of millions of faithful ahead of the Muslim fasting month of Ramadan and as the annual hajj pilgrimage looms.

The decision showed the growing worry across the Mideast about the virus as Iran confirmed that infected cases in the country spiked by over 100, to 254 now.

A total of 26 people have died so far, it said. That pushes the region’s overall cases to above 350.

It appeared Saudi officials worried about the risk of pilgrims spreading the virus as they had in Iran.

The virus’ epicenter in the Islamic Republic is the holy Shiite city of Qom, where the faithful in reverence reach out to kiss and touch a famous shrine.

That shrine and others have remained open, despite Iran’s civilian government calling for them to be closed.

Authorities said Friday prayers in Tehran and other cities would be canceled, according to semiofficial Iranian news agencies.

But the virus has struck the official in charge of Iran’s response to the outbreak, as well as a reformist lawmaker.

On Thursday, a hard-line cleric from Qom who also serves in parliament posted a video online acknowledging he had been infected.

The head of the parliamentary security and foreign relations commission, Mojtaba Zonnour, said he had also tested positive for the virus.

‘Yes, my corona test is positive, too and I am in quarantine,’ Zonnouri said in the video. ‘God willing, our nation will overcome in fight against corona.’

Pope Francis has been forced to cancel a planned Mass in Rome with other clergy after suffering a ‘slight illness’.

The Vatican said the 83-year-old pontiff had a ‘slight indisposition’ that meant he did not attend an event at the St John Lateran basilica in Rome on Thursday morning.

His illness comes a day after he kissed heads and touched faces as he met with crowds in St Peter’s Square, saying he had solidarity with those suffering from coronavirus.

Italy is currently in the grips of a coronavirus outbreak that has seen towns in the north placed on lockdown and travellers from the region spread the infection to previously unaffected areas of Europe.

The capital, Rome, had three cases, but all three infected patients were cured, officials said.