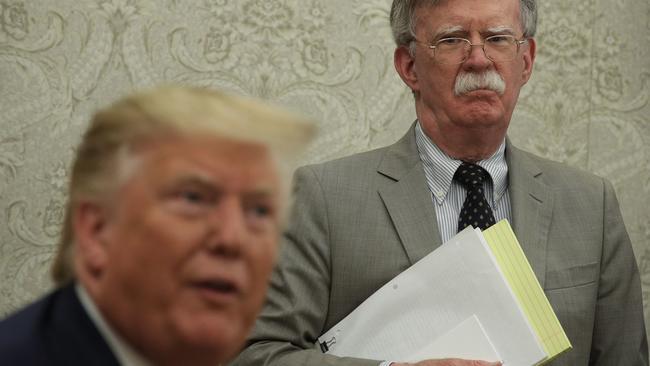 "John Bolton has the evidence..."

After White House lawyers’ brief rebuttal (less than 3 hours) managed to tear apart Rep. Schiff and the House Managers’ 20-plus-hour ‘odyssey’ in the Senate impeachment trial, is anyone surprised that – right at the last minute – a ‘bombshell’ is leaked to the media that promises – as always – “this time we got him.”

“[Trump] wanted to continue freezing $391 million in security assistance to Ukraine until officials there helped with investigations into Democrats including the Bidens.”

The leak – if true –  contradicts Trump’s claim that he never tied the hold-up of Ukrainian aid to his demands for investigations into Burisma corruption surrounding Hunter Biden’s exorbitant pay for doing sweet F.A.

“John Bolton has the evidence. It’s up to four Senate Republicans to ensure that John Bolton, Mick Mulvaney, and the others with direct knowledge of President Trump’s actions testify in the Senate trial.”

And The House Managers were even stronger in tone, demanding Bolton as witness…

“Today’s explosive revelation that President Trump personally told former National Security Advisor John Bolton that he would continue the freeze on military aid to Ukraine until that country agreed to his political investigations confirms what we already know. There can be no doubt now that Mr. Bolton directly contradicts the heart of the President’s defense and therefore must be called as a witness at the impeachment trial of President Trump.

“Senators should insist that Mr. Bolton be called as a witness, and provide his notes and other relevant documents. The Senate trial must seek the full truth and Mr. Bolton has vital information to provide. There is no defensible reason to wait until his book is published, when the information he has to offer is critical to the most important decision Senators must now make — whether to convict the President of impeachable offenses.

“During our impeachment inquiry, the President blocked our request for Mr. Bolton’s testimony. Now we see why. The President knows how devastating his testimony would be, and, according to the report, the White House has had a draft of his manuscript for review. President Trump’s cover-up must come to an end.

“Americans know that a fair trial must include both the documents and witnesses blocked by the President – that starts with Mr. Bolton.”

Published in Impeachment, Political News, Schiff, Trump and US News