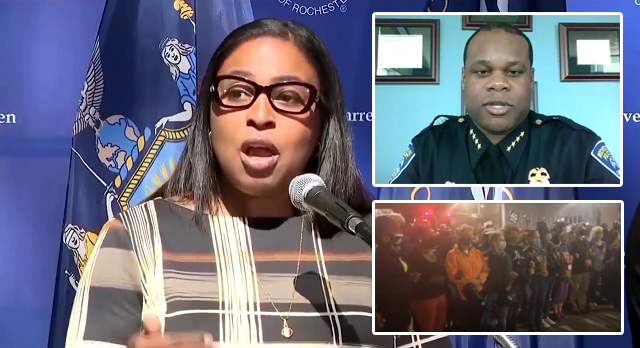 Rochester Police Chief La’Ron Singletary and his entire command staff announced their sudden retirements on Tuesday, just two days after Mayor Lovely Warren announced a plan to enlist “elders” to serve as human shields for “protesters” who rioted for days, attacked police, attacked diners at restaurants and set fire to a black-owned business.

Whoa. After days of protests in Rochester over the killing of Daniel Prude, mayor Lovely Warren just announced entire Rochester police department command staff, including the chief of police, is resigning.

Asked during a city council meeting who will be in charge during tonight’s protests, the mayor said she doesn’t know.

“We would have to find an interim chief,” says Warren says. “Because I just got the call before this hearing, I don’t know.

As a man of integrity, I will not sit idly by while outside entities attempt to destroy my character. The events over the past week are an attempt to destroy my character and integrity. The members of the Rochester Police Department and the Greater Rochester Community know my reputation and know what I stand for. The mischaracterization and the politicization of the actions that I took after being informed of Mr. Prude’s death is not based on facts, and is not what I stand for.

I would like to thank the men and women of the Rochester Police Department, as well as the Rochester Community for allowing me the honor of serving as your Chief and fulfilling a lifelong dream. I look forward to continuing to serve our community in my next chapter.