Robots And Social Distancing Will Revolutionize Restaurants In Post-COVID World 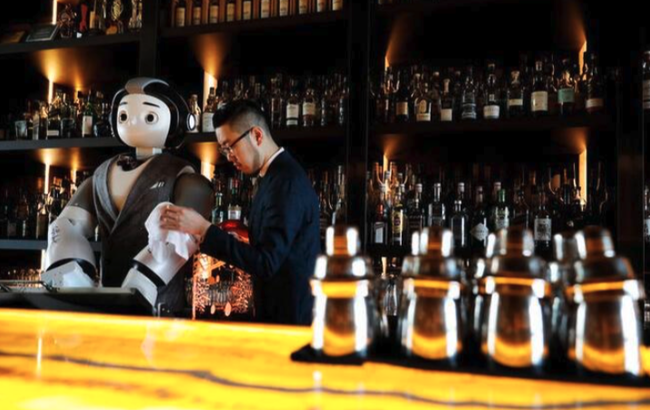 Robots And Social Distancing Will Revolutionize Restaurants In Post-COVID World

Eateries will never be the same.

Prior to the COVID-19 outbreak, the trend was in place for artificial intelligence and automation to displace tens of millions of jobs over this decade. Replacing workers with robots has certainly been thrown into hyperdrive in a post-corona world.

Strict social distancing enforced by some countries has now given way to reduced forms of distancing in daily life. This is precisely what is happening in South Korea, with some bars and restaurants reopening.

At Coffee Bar K in Seoul, a robo-bartender has replaced a human, can make perfect cocktails in the fraction of the time, reported Reuters.

The bar is encouraging customers to return, promoting its use of robots preparing drinks in a contactless environment, as a bid to attract patrons and increase sales.

“Since this space is usually filled with people, customers tend to feel very anxious,” human bartender Choi Won-woo said.  “I think they would feel safer if the robot makes and serves the ice rather than if we were to do it ourselves.”

Down the street, a robot arm shakes up drinks for thirsty consumers at the Cafe Bot Bot Bot coffee bar. Manager Kim Tae-wan said customers feel much safer with robots handling their drinks than humans.

A post-corona world will be filled with many challenges for bars and restaurants. The most difficult question for operators and managers is how to instill enough confidence in people to bring them back.

One way to do this is by automating the back and front end of the restaurant. Allowing robots to prepare drinks and food in a contactless environment in the future and will drive confidence among patrons.

Robots to replace bartenders, cooks, and waiters is already here:

Concentrating on the front end of the restaurant. Operators and managers will likely have to readjust the dining floor with social distancing plexiglass dividers at tables, ultraviolet thermal body scanner at the entrance, and increasing online delivery via food lockers.

Another way to boost sales and save the collapsing restaurant industry is to install plexiglass bubbles, called Plex’Eat, which are suspended from the ceiling and sit around a patron’s head. At the same time, they have dinner, ensuring social distancing and a reduction in virus transmission inside the facility. This is what they look like:

While robots and social distancing measures seem radical, and quite frankly absurd, they could be the new standard for restaurants and bars in a post-corona world. However, there’s a trade-off — the automation part of this will lead to permeant job loss to some degree.