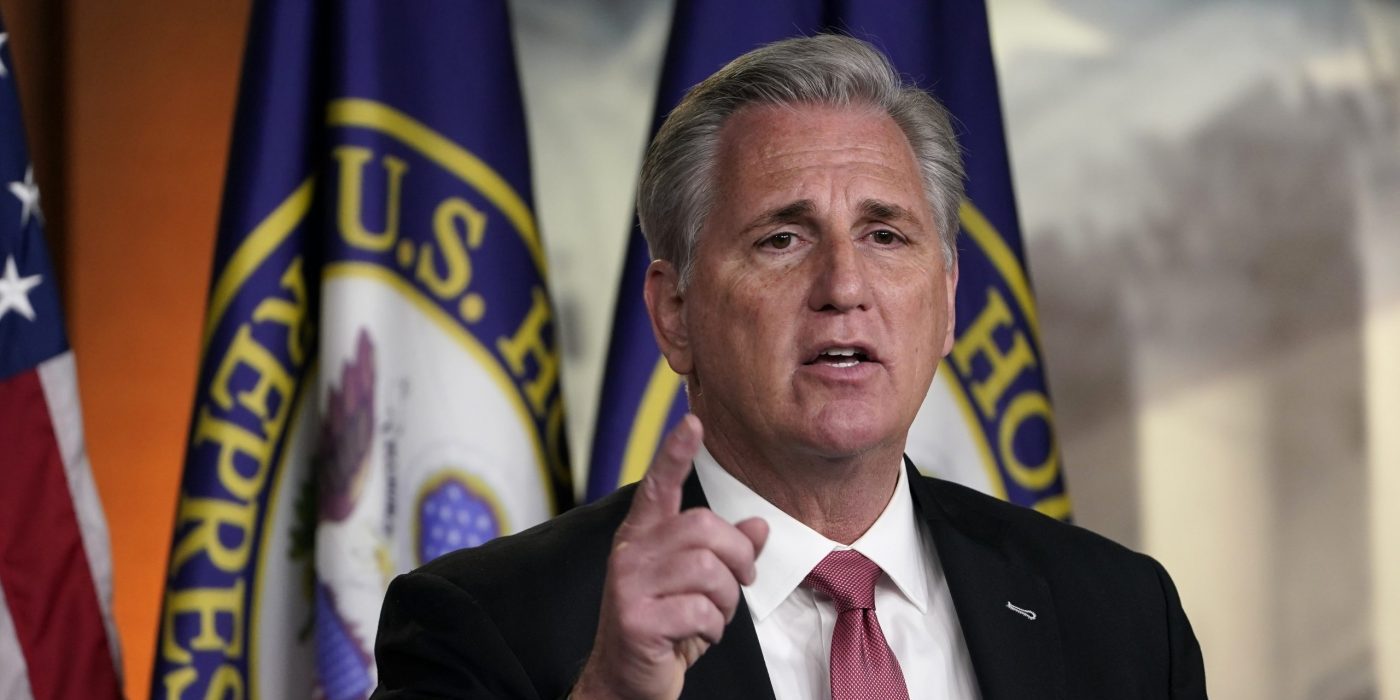 “At a time when our country needs to come together, Democrats in Congress are rehashing the same strategy that they employed for the last four years…”

A private meeting between the two men at Trump’s Mar-a-Lago resort signaled a remarkable turnaround in the former president’s stature among elected Republicans.

In the immediate aftermath of the Capitol uprising, the idea that he would enjoy any sort of kingmaker role in his post-presidency seemed highly unlikely to the leftist media who colluded with Democrats in long plotting his political demise.

But following an initial wave of condemnation by a handful of NeverTrumpers, many more Republicans appear to be rallying around the leader.

Ffully aware that his supporters are poised to punish anyone who displays disloyalty, even those who would like to see him vanish are unable to cast him aside.

With that in mind, party leaders are working to keep Trump in the fold as they focus on retaking the House and Senate in 2022.

“United and ready to win in ’22,” McCarthy tweeted after their meeting. Both he and Trump issued statements outlining their pledge to work together to help Republicans win back control of the House and Senate in 2022.

The realignment with Trump comes as those who have crossed him continue to feel the burn.

Trump ally Matt Gaetz, R-Florida, spent the day in Wyoming trying to take down Rep. Liz Cheney, the No. 3 House Republican, who voted for Trump’s impeachment.

Amid the backlash, Senate Republicans largely made clear this week that they have no intention of convicting Trump.

But some still suspect his role may be diminished as his political opponents continue their onslaught to try to “cancel” his presidency.

Now, he is largely isolated and silenced by social media platforms as President Joe Biden attempts to dismantle his agenda executive order by executive order.

He has not been seen in public since he disappeared behind the well-manicured hedges at Mar-a-Lago last Wednesday, a half-hour before his presidency ended. He has spent his days consulting with aides and defense lawyers as he prepares for his historic second impeachment trial.

Last time, Trump had an army of defenders that included a team of Washington lawyers, a presidential communications shop, a taxpayer-funded White House counsel’s office and the steadfast backing of top Republicans, including the Republican National Committee.

This time, Trump is still scrambling to pull together a legal team, with the trial less than two weeks out.

“I think he’s at a significant disadvantage,” said criminal defense attorney Alan Dershowitz, who was part of Trump’s legal team in 2020 but is among the long list of lawyers sitting this one out.

Yet even the impeachment trial, once seen as an opportunity for Senate Republicans to purge Trump from the party by barring him from ever running for office again, is now being used as a rallying cry to reunite the party against Democrats.

Instead of debating whether he is guilty of “willfully inciting violence against the government of the United States,” Republicans have instead attacked the process, arguing that it is unconstitutional to try a president who has already left the White House.

“At a time when our country needs to come together, Democrats in Congress are rehashing the same strategy that they employed for the last four years: politically motivated overreach that will only divide us further,” Republican National Committee Chair Ronna McDaniel said in a statement that came after heated internal divisions over whether the group should publicly criticize Trump for inciting the riot.

In an interview, McDaniel declined to criticize the five Republicans senators who voted this week to move forward with the trial. But she said “it’s more important to look at the 45 that said this is ridiculous.”

Aside from the trial, Trump has gradually begun to return to the public conversation, firing off press releases from the political committee he created before leaving the White House.

“He’s decompressing. He’s got a legal team he’s trying to organize, and he just needs to keep doing what he’s doing,” said Republican Sen. Lindsey Graham of South Carolina, a close congressional ally who has been helping Trump stand up a legal team after numerous firms punted.

“I think there’s an adjustment,” said Matt Schlapp, chair of the American Conservative Union and another Trump ally.

Jason Miller, an adviser to Trump, insisted that it was “too early” to discuss the president’s impeachment strategy and the post-presidential political operation that is expected to include former White House political director Brian Jack and Trump’s former campaign manager Bill Stepien.

“We’ve had discussions about where we want to get active with regard to the 2022 midterms and how we help Republicans win back the Senate and the House,” Miller said, but Trump has yet to decide whether he will get involved in primary races to challenge Republicans who voted to impeach him.

After those members faced intense backlash from Trump supporters, Senate Republicans voted overwhelmingly Tuesday for an attempt to dismiss his second impeachment trial.

“I think that’s pretty clear that Republican voters are adamantly opposed to impeachment and Republicans who vote for impeachment do so at their own peril,” Miller said.

Despite the Capitol riot, polls show Trump remains deeply popular among Republican voters — many of whom now consider themselves more closely aligned with him than the party.

“I think Trump’s departure left a huge vacuum,” he continued. “He was the one thing that united Republicans more than anything. I mean, the Republican Party became the Trump Party for four years. And without him leading it, there’s an obvious power vacuum, and I think you’re seeing that play out now in Congress.”

The question is whether Trump’s influence will endure. The internal divisions his team is fomenting could ultimately undermine the party’s quest to retake Congress.

And it’s unclear whether he can transfer his personal popularity to other candidates when he’s not on the ballot. Republicans lost control of the House in 2018 and gave up the Senate this month despite a last-minute appeal from Trump.

Graham, who declared just this month that he’s done with Trump — “All I can say is count me out. Enough is enough.” — has since stressed the importance of keeping the party together.

“I want to make sure that the Republican Party can grow and come back, and we’re going to need Trump and Trump needs us,” he told reporters.

As for Republicans who vote to convict Trump, “I guess it depends on what state you’re in and what phase in your career you are,” he quipped.

Adapted from reporting by the Associated Press

Published in Political News, Riots/Protests, Trump and US News