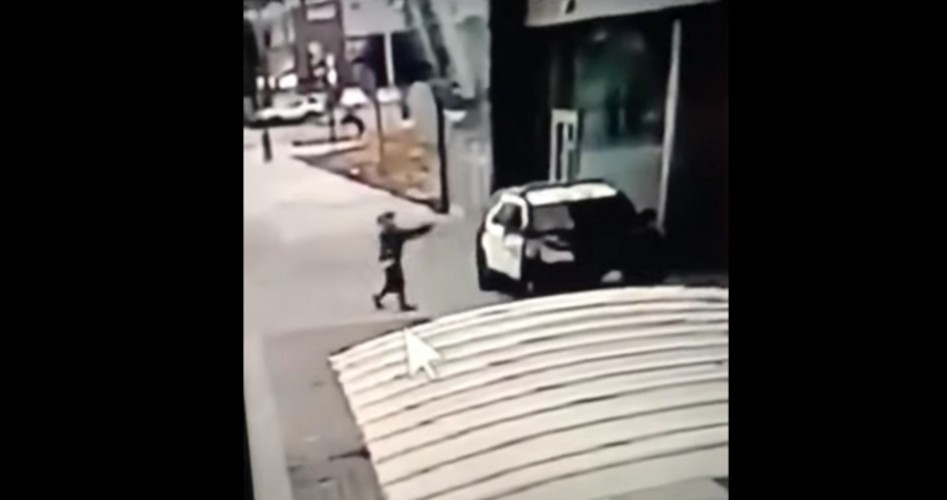 “Death to the police!” shouted protesters outside a Los Angeles area hospital in Lynwood after two deputy sheriffs of the Los Angeles County sheriff’s department were shot, without provocation, while they were sitting in their patrol car Saturday night around 7 p.m. in Compton, California. The two deputies are reportedly fighting for their lives, and protesters blocking the entrance to the emergency room shouted, “We hope they die.”

One protester yelled, “I want to deliver a message to the family of the pigs. I hope they f****** die.” Another demonstrator told the police, “Y’all gonna die one by one. This ain’t gonna stop.” Unconfirmed media reports indicate that the protesters were identified with the Black Lives Matter movement.

The wounded deputies have been identified as a 24-year-old man and a 31-year-old woman. Both are in critical condition, and described as “fighting for their lives,” while undergoing surgery.

Both deputies were reported out of surgery by 11 p.m., according to KABC-TV. The two deputies have been on the job just over a year. The female officer is the mother of a six-year-old boy.

President Donald Trump, who was holding a rally in Nevada Saturday night, quickly condemned the attack in strong terms, describing the person who did it as an “animal,” and that if either of the two deputies were to die, he should get the death penalty. “Only way to stop this!” Trump added.

“Every week across the nation, someone is losing their life in the line of duty,” Villanueva said. “It p****s me off; it dismays me at the same time. There’s no pretty way to say it.” The sheriff noted the long hours that his department had been working, due to the wildfires in southern California, as well as continuing protests in south Los Angeles.

After the deputies were brought to the hospital, protesters showed up at the hospital’s emergency entrance, blocking the doors, and shouted their desire that the deputies die. Other deputies ordered them to disperse, telling them that their blocking the entrance was “an unlawful assembly.” (It should be noted that the First Amendment protects the right of peaceful protest — it is unthinkable that James Madison, who wrote the First Amendment, intended to protect some “right” to block the entrance to a hospital emergency room). Protesters were told in a tweet, “DO NOT BLOCK EMERGENCY ENTRIES & EXITS TO THE HOSPITAL. People’s lives are at stake when ambulances can’t get through.”

While most of those staging the illegal protest — blocking a hospital entrance — complied, deputies tweeted that “a male adult protester refused to comply.”

“During his arrest, a struggle ensued at which time a female adult ran towards the deputies, ignored repeated commands to stay back [emphasis added] as they struggled with the male and interfered with the arrest,” the LA Sheriff’s Department added. “The female adult, who was later identified as a member of the press, did not identify herself as press and later admitted she did not have proper press credentials on her person.”

Of course, freedom of the press does not entitle a media person, even if she is properly identified, to interfere with a lawful arrest. Two deputies had already been shot earlier in the evening, and unruly protesters had been blocking the entrance to a hospital emergency room. They should not have to also contend with a reporter charging toward them, especially one who opted to ignore repeated orders to stay back.

Undersheriff Tim Murakami said he was looking into the arrest, but said the reporter was being released, although she would be charged with a misdemeanor.

It is not surprising that local law-enforcement officers, whether city police or country deputies, are being randomly attacked, considering the incendiary rhetoric of left-leaning politicians and their media allies, saying, without evidence, that there is systemic racism in local law enforcement. To the contrary, it should be noted that millions of interactions between police or sheriff’s deputies happen every year across America, with only few significant incidents. If local law enforcement was filled with racist cops, one would think that thousands of violent confrontations would be happening. As it is, more local law enforcement officers are killed each year in the line of duty than are civilians by police, of all races and ethnicities.

Police officers who do mistreat citizens should be punished, but to describe the average officer as some sort of racist bigot, just because that person is wearing a police officer’s uniform, is the very definition of bigotry and prejudice.

It is past time for politicians to quit equating police officers with Nazis and hurling other such hateful rhetoric. Otherwise, tragic incidents such as that in California will only become more common.

Steve Byas is a university instructor in history and government and the author of History’s Greatest Libels. He may be contacted at byassteve@yahoo.com.