Philippine Top Diplomat to ‘Ugly Oaf’ China: ‘Get the F**k Out’ 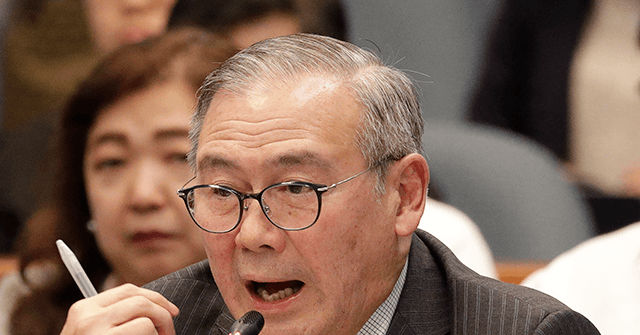 Philippine Top Diplomat to 'Ugly Oaf' China: 'Get the F**k Out'

Philippine Foreign Secretary Teodoro Locsin, Jr., the nation’s most powerful diplomat, told Beijing to “get the fuck out” of Manila’s sovereign territory within the South China Sea on Sunday.

“China, my friend, how politely can I put it? Let me see… O… GET THE FUCK OUT,” Locsin wrote in a statement posted to his official Twitter account on May 2.

China, my friend, how politely can I put it? Let me see… O…GET THE FUCK OUT. What are you doing to our friendship? You. Not us. We’re trying. You. You’re like an ugly oaf forcing your attentions on a handsome guy who wants to be a friend; not to father a Chinese province … https://t.co/KTv1TOQvN7

China has since mid-March refused repeated calls by the Philippines to recall hundreds of its fishing vessels from the country’s Exclusive Economic Zone (EEZ), in which the Philippines’ retains the sole rights to fishing and natural resource exploration. Manila has said it believes the 220-strong fishing fleet is manned by Chinese maritime militia.

“What are you doing to our friendship?” Locsin’s Twitter statement further read. “You. Not us. We’re trying. You. You’re like an ugly oaf forcing your attentions on a handsome guy who wants to be a friend; not to father a Chinese province …”

“He doesn’t have a uterus,” Locsin wrote, referring to a “handsome” masculine personification of the Philippines. “If he tried to give birth to a Chinese province it would be a ball of crap at best and the end of the regime. What is it so hard to understand about [Philippine President Rodrigo] Duterte’s UN declaration that the Arbitral Award made all maritime features Philippines; no one else’s?”

An independent arbitral tribunal established by the U.N. Convention on the Law of the Sea (UNCLOS) ruled in July 2016 that Beijing’s claim to nearly 90 percent of the South China Sea was illegal. Beijing dismissed the ruling — in a case brought by the Philippines — as “nothing more than a piece of waste paper” at the time and has continued to pursue its illegal claims to the disputed waterway since then.

Philippine Foreign Secretary Locsin has a history of Tweeting inflammatory comments, many of which concern the Philippines and China’s bilateral relationship. Addressing the Philippines’ issuance of a formal diplomatic protest to Beijing over China’s presence in the country’s waters on March 21, Locsin wrote:

Chinese embassy said that in Chinese social media my expression “fire at will”—unmistakably our diplomatic protest—is portrayed in Chinese characters as an order to fire guns at Chinese boats. I am not responsible for totalitarian distortions of plain English. Correct it yourself

After the Philippine Inquirer published an article quoting Renato Reyes, Jr., the secretary-general of the leftist Philippine group Bayan (“Country”), objecting to the presence of the U.S. military in the Philippines, Locsin on March 5 re-tweeted the article along with the following reply: “Theses are fucking Communists. You shoot them. You don’t listen to them.”

Locsin tweeted “Fuck you” to a Philippine journalist in November 2019 after the reporter tweeted at Locsin an excerpt of “a citation of the [Philippine] Code of Conduct and Ethical Standards for Public Officials and Employees,” the Philippine Star reported at the time.

The Philippine Secretary of Foreign Affairs, the country’s top diplomat, was criticised yesterday for swearing at a @inquirerdotnet journalist. This morning he tweeted this to a @PhilippineStar journalist… then deleted it. pic.twitter.com/jlTj3jIvFV

“RA 6713 Section 4: Professionalism-Public officials, employees shall perform, discharge their duties with the highest degree of excellence, professionalism, intelligence, skill; Responsiveness to the public-(They) shall extend prompt, courteous, adequate service to the public,” the excerpt read.