Philadelphia Inquirer on Holocaust Remembrance Day: Not Wrong to Compare Trump to Hitler 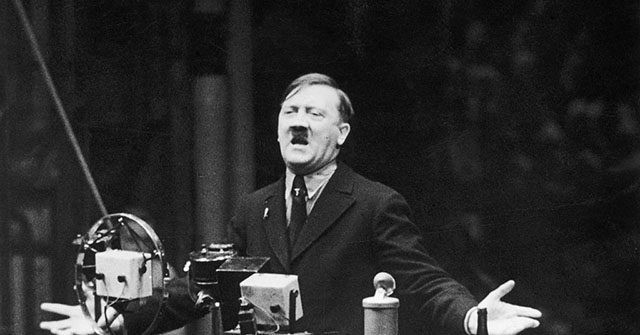 Philadelphia Inquirer on Holocaust Remembrance Day: Not Wrong to Compare Trump to Hitler

On International Holocaust Remembrance Day, the Philadelphia Inquirer published an op-ed that made comparisons between…

On Wednesday — International Holocaust Remembrance Day — the Philadelphia Inquirer published an op-ed by the paper’s former editor David Lee Preston in which he makes several comparisons between Donald Trump and Adolf Hitler while presenting Trump’s presidency as a means to “better understand Hitler’s sway over Germans.”

The essay, titled “Is it wrong to compare Trump to Hitler? No,” approves of the comparison despite admitting that many have found it “offensive to use the Holocaust as a yardstick for the political excesses of the last four years.”

Is it wrong to compare Trump to Hitler? No. | Opinion https://t.co/Aj4VgBS7eq

Preston takes issue with those who condemned Director Spike Lee’s attack on Trump during his Sunday award acceptance from the New York Film Critics Circle, where he reportedly said that the former president will go down in history “with the likes of Hitler.”

“They believe that to mention Donald Trump and Adolf Hitler in the same breath, as Spike Lee did on Sunday in an awards speech, disrespects the millions of innocent victims and survivors, diminishing the enormity of the Nazis’ crimes,” he writes before expressing his disagreement.

“I think Trump’s ability to incite followers under the banner of white nationalism has enabled us to better understand Hitler’s sway over the Germans, connecting us to the real people in the old black-and-white photo images and newsreels that show the masses with arms outstretched toward their führer,” he adds.

The essay continues by claiming that Kristallnacht — the infamous anti-Jewish pogrom carried out throughout Nazi Germany — could now be understood in light of Trump’s presidency.

“Now we have seen in our nation’s capital — indeed, in our Capitol — how Kristallnacht could have happened,” Preston writes. “Now we have a way to understand the rise of a fascist dictator and the blind allegiance of murderous minions.”

The author then questions whether the Trump supporters who stormed the U.S. Capitol were any different from Germans who participated in the infamous anti-Jewish pogrom.

“Are my fellow Americans who breached the barricades and broke into the halls of Congress different from the Germans who thought they were doing their patriotic duty by burning synagogues and shattering Jewish-owned shops in 1938?” he asks.

“It is sacrilegious to suggest a link between Hitler and Trump?” Preston asks, after accusing Trump of promoting racism and refusing to disavow a Nazi figure.

“I don’t think so,” he concludes. “I’d say it keeps us vigilant for the warning signs.”

The op-ed prompted a swift backlash, many noting the particularly sensitive timing of publishing such an essay.

“It’s Holocaust Remembrance Day,” wrote Erielle Davidson, senior policy analyst at the Jewish Institute for National Security of America. “I would say, have a little decency, but our media is full of morally bankrupt individuals.”

“Hence, how headlines like this take shape. In all likelihood, the author had no idea, which makes the pontification all the more absurd,” she added.

In all likelihood, the author had no idea, which makes the pontification all the more absurd.

“Today is Holocaust Remembrance Day and this is what you tweet?” asked journalist Siraj Hashmi.

“Yes @DavidLeePreston many of us find the article offensive,” wrote one Twitter user. “It’s also offensive because of efforts by ‘people like you’ to use the Holocaust for your professional, political or financial gain.”

“You had to post this on Holocaust Remembrance Day?” exclaimed another user. “You guys are disgusting… oh and btw, there is NO comparison.”

Others shot back at the Inquirer, subjecting the paper itself to various comparisons.

“Is it wrong to compare The Phileldelphia Inquirer [sic] to garbage? No,” quipped one Twitter user.

“Is it wrong to compare the Philadelphia Inquirer to Das Reich? No,” wrote another.

“Compare anything to everything, but some comparisons are so fat stretched they’re useless,” wrote yet another.

“Can I compare The Philadelphia Inquirer to Der Stürmer? Yes, but what’s the point?” he added.

“I remember when you used to journalism and didn’t publish children’s logic opinion articles,” another wrote. “Godwin’s Law would like a word.”

Others also expressed that such a comparison belittles the severity of the Holocaust while demeaning millions of Holocaust victims.

“People like @DavidLeePreston will demean the lives of millions of dead for a short-term partisan fix,” wrote syndicated columnist David Harsanyi. “Shameful.”

People like @DavidLeePreston will demean the lives of millions of dead for a short-term partisan fix. Shameful. https://t.co/8pfM9IChBV

“Completely demeans those who actually died by Hitler’s rule and shows a lack of historical understanding,” wrote one Twitter user. “My family is offended.”

“Are you kidding? This article is an insult to the million of Jews murdered by Hitler,” wrote another user.

“‘Yeah your grandparents dying at Auschwitz is about the same as Donald Trump calling Nancy Pelosi a mean name,’” he added.

Are you kidding? This article is an insult to the million of Jews murdered by Hitler

“Not only is it wrong, but it is also insulting to the memory of those who bore the brunt of Hitler’s actions,” wrote another. “Screw you.”

“Yes, it is wrong,” wrote Twitter user Brian Knotts. “It minimizes the evil Hitler did by equating his genocide of Jews and murderously conquering most of Europe with Trump cutting taxes and building a border wall/fence.”

“A. Trump was nothing like Hitler. B. This writer cheapens the suffering of HIS OWN FLESH AND BLOOD to score partisan political points against a guy who literally did nothing wrong but touch the third-rail of American politics: He criticized the Left,” he added.

“Six million dead human beings would argue that your opinion is foolish,” wrote one Twitter user. “They wish there had been something like elections in Germany.”

“Perhaps you need to follow @FacesAuschwitz for a reminder of how they are different,” wrote yet another.

“Hitler was responsible for the genocide of: Over 6 million Jews Over 200k Roma Almost 10 million Russians Hundreds of thousands of disabled people,” wrote another Twitter user. “But yeah basically the same.”

“You’re talking about the same guy who was responsible for the Holocaust…right? the numbers on that were somewhere around 6 million…the more you compare Hitler to Trump, the more you devalue the devastation of the Holocaust,” wrote another.

“This statement is absurd,” wrote another. “You may not like President Trump, but he worked for the good of Americans, you can either like or dislike his programs that’s your right. To compare him to hitler is just anti American this my opinion.”

“Yes, it is wrong,” another user wrote. “Hitler was a fascist dictator, responsible for the deaths of millions, and was removed from power by a World War. Trump was an elected President, that was removed from office by losing an election.”

Others expressed outright disgust at the very notion of comparing the two.

“You people are disgusting!” wrote one Twitter user. “You have no idea what people went through during those times! It is Insulting to those of us that had actually family there during this time. It starts with taking their guns, then their free speech them their property and ultimately their lives!”

You people are disgusting! You have no idea what people went through during those times! It is Insulting to those of us that had actually family there during this time. It starts with taking their guns, then their free speech them their property and ultimately their lives!

“Absolutely despicable that the relative of Holocaust survivors would compare the tragedy they lived through to 4 year of a POTUS he didn’t like,” wrote yet another user. “I would say you should be ashamed, but it appears our media class has forgotten what shame means. 11 million deaths…11 million…”

“Downplaying the Holocaust is a form of Holocaust denialism. Comparing the leader of a free nation to Hitler is doing just that,” wrote another. “This is disgusting and sickening.”

Downplaying the Holocaust is a form of Holocaust denialism. Comparing the leader of a free nation to Hitler is doing just that. This is disgusting and sickening.

This is not the first time a major paper or personality has promoted comparing Trump and his presidency to Hitler and the Holocaust.

In November, CNN anchor Christiane Amanpour recalled Kristallnacht by noting that Trump’s presidency has similarly been a “modern day assault” attacking “those same values” the Nazis did.

In December, a Washington Post editorial compared challenging recent election results with denying that a Nazi Holocaust ever occurred.

Earlier this month Hollywood star Arnold Schwarzenegger compared rioters who stormed Capitol Hill to the rise of Nazis in his native Austria, saying that the event calls to mind the 1938 Kristallnacht pogrom against Jews.