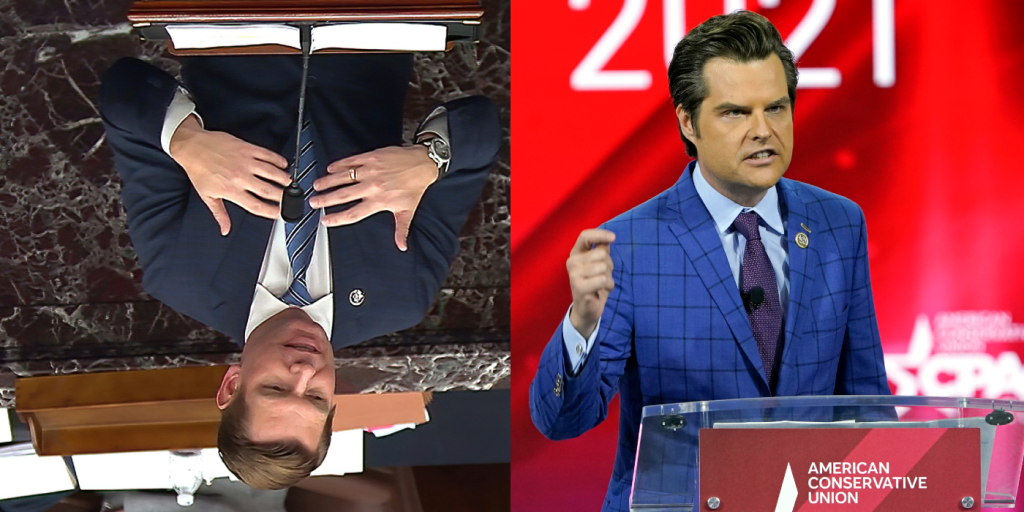 First, the similarities: Based on what is known, both cases appear to involve claims of consensual sexual intercourse by congressmen who were eligible bachelors at the time with someone above the age of consent (16) in Washington, DC.

After news broke of Swalwell’s longstanding ties to a Chinese “honey-trap” spy, Pelosi insisted that she didn’t “have any concern about Mr. Swalwell,” who is considered to be a protégé of hers.

Shortly after being briefed by federal authorities on the matter, she reappointed Swalwell to the House Intelligence and Judiciary committees.

Following an effort last month by House Minority Leader Kevin McCarthy, R-Calif., to have Swalwell taken off the Intelligence Committee, which receives sensitive security briefings, due to the concerns that he might be compromised by a hostile foreign entity, congressional Democrats instead appeared to wage a retaliation attempt.

Notably, McCarthy has also stated that if the “serious” allegations against Gaetz proved true, he would support Gaetz’s removal from the Judiciary and House Armed Services committees.

But he called for the facts to come out before rushing to judgment, much as Democrats have done in recent scandals involving then candidate Joe Biden and New York Gov. Andrew Cuomo, both Democrats, who have faced credible accusations of sexual assault.

Pelosi, however, took a much different tone than with Swalwell when addressing the accusations against Gaetz, a rising star in the Republican party who was engaged last December at then-President Donald Trump’s Mar-a-Lago resort.

Pelosi said that, at a minimum, Gaetz should be removed from his committees—and also that congressional Democrats should launch their own probe if the reports proved accurate.

“If in fact these allegations are true, of course being removed from the Judiciary Committee is the least that could be done,” Pelosi told reporters. “From what we’ve heard so far, this would be a matter for the Ethics Committee.”

The Ethics panel, made up of five members from each party, can recommend punishments ranging from a reprimand, or formal rebuke, to expulsion, which is rare partly because lawmakers often resign first. The full House would have to approve such actions, with expulsion requiring a two-thirds majority.

Meanwhile, at least one Democratic lawmaker already had called for Gaetz’s removal from the Judiciary Committee, which oversees the Justice Department, regardless of whether the salacious innuendo bore out.

On Wednesday, Rep. Ted Lieu, D-Calif., tweeted that Gaetz should not be “sitting on the Congressional Committee that has oversight over the Department that is investigating him.”

The Justice Department is reportedly investigating Gaetz for sex-trafficking amid claims that he bought lavish gifts and paid for the services of women he met through Seeking Arrangement, an online dating site for wealthy “sugar daddies.” That allegedly included flying the women to meet him for sexual encounters.

An associate whom Gaetz apparently relied on for screening the women, Joel Greenberg, was indicted on similar federal charges last year.

Among the claims is one that Gaetz allegedly paid a 17-year-old to accompany him on a flight, although he has denied this, saying it should be easy for flight records to verify.

No accuser has yet come forward publicly in the allegations against Gaetz, which the congressman has said was part of an extortion plot involving a corrupt former Justice Department official named David McGee, now a partner at a Pensacola law firm.

The allegations against me are FALSE.

The extortion of my family by a former DOJ official is REAL.

DOJ has the tapes.

Pelosi’s comments came about two months after the House, on a mostly party-line vote, took the unprecedented step of removing Rep. Marjorie Taylor Greene, R-Ga., from both her committees. That was in reaction to her history of spreading conspiracy theories and threatening Democrats on social media.

Published in Crime, Law, Pelosi, Political News and US News