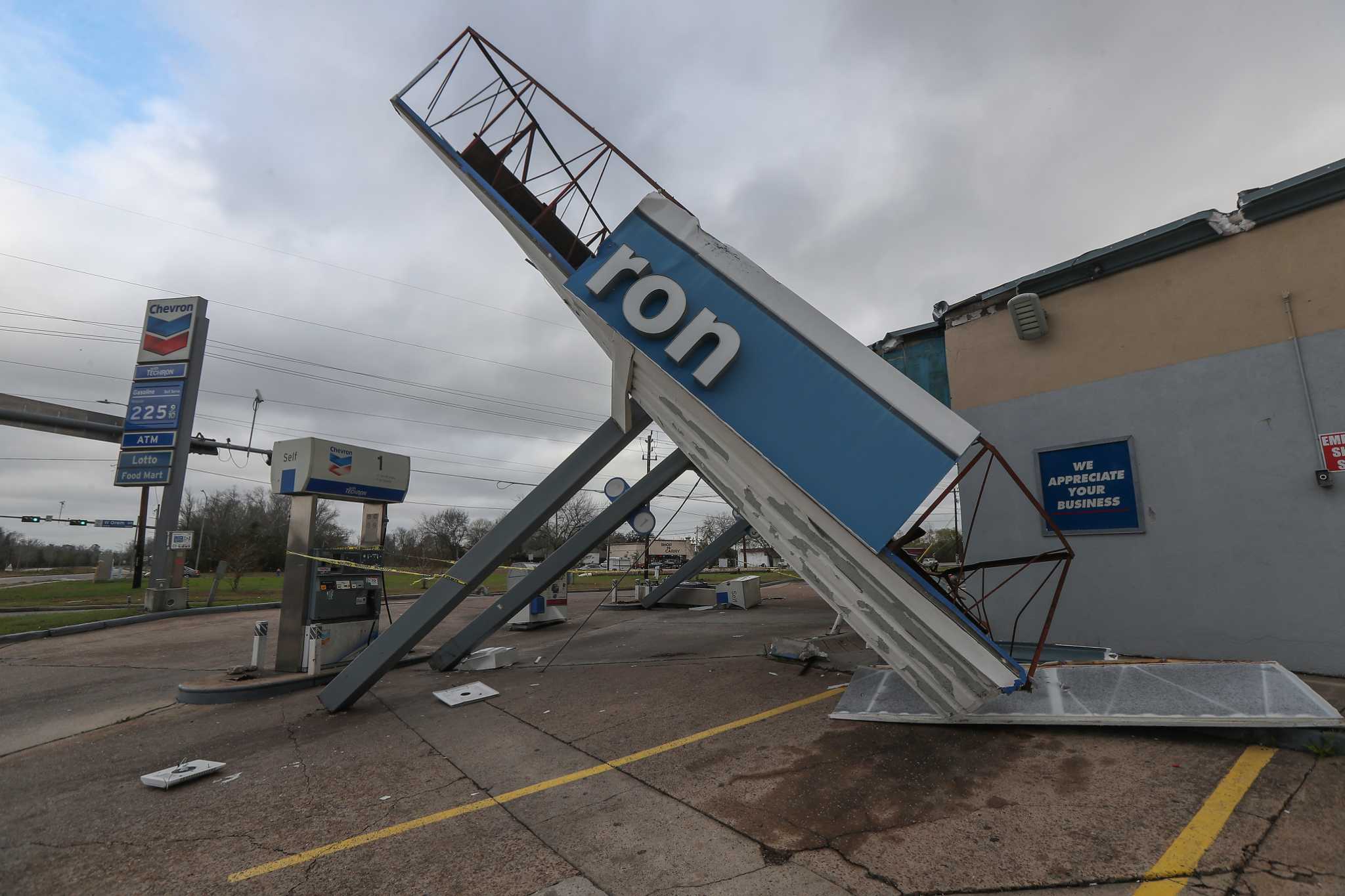 Storms carrying high winds of at least 60 miles per…

A line of heavy storms moved through the region just after midnight with winds that caused power outages for as many as 66,000 residents at the peak, according to CenterPoint Energy figures. As of mid-Saturday, power had been restored for all but 5,200 Harris County homes and businesses. The number was 5,300, down from a peak of 19,000, for Entergy Texas, which services most counties north and east of Houston.

The entire line of storms carried winds of 30-40 miles per hour, with bursts in some places topping at least 60 miles per hour, said Dan Reilly, a meteorologist with the National Weather Service.

While there was scattered damage in Houston – a tree crashing into a home in The Woodlands, jarring a family of three, and a gas station in southwest Houston saw its port collapse – the brunt of the storms landed elsewhere.

And officials in Louisiana said Saturday that at least three people there died as a result of the storms, including an elderly couple found near in their demolished trailer. Dallas police said one person was killed Friday night when a car flipped into the Five Mile Creek near downtown, though it’s unclear if that crash was weather-related.

Officials in Houston monitored the storms from the Office of Emergency Management until about 1:30 a.m., Houston police spokesman Kese Smith said, and there were no major incidents to report.

Reilly said the storms create downbursts with strong gusts that are responsible for much of the damage.

“You get these periodic downbursts and stronger winds pushing out with the wind,” said Reilly. “In a case like that, the wind damage tends to be laid out in one direction.”

Such bursts become “microbursts” when they are severe, but Reilly said there is no evidence yet that those occurred in the overnight storms. Reilly said the weather service also detected some rotating storms on the radar, which could indicate tornadoes touched down.

“We can’t confirm that at this point,” he said. One such storm was spotted near Hobby Airport.

The weather service’s log of damage reports includes structural damage to a Buffalo Speedway gas station and downed trees in The Woodlands.

One tree there crashed into a home on Drybrook Road, prompting the Spring Fire Department to respond for a reported gas leak around 11 p.m..

Benjamin Bailey said he was watching television around 11 p.m. when the strong gust of wind came through. A few seconds later, a tree came crashing through the roof and shaking the entire house.

“The first thing we thought about was our baby,” Bailey said, adding that he, his wife and their 10-month-old were all unharmed.

“I heard a big crashing sound, almost like the wind had really picked up,” he said. “Essentially, that’s when the tree came straight into our house, came through our kitchen, water pouring in everywhere – absolutely devastating.”

The wind was so strong, Bailey said, that before the tree fell he was already concerned it might rip the roof off his house. Spring firefighters were there within seconds, and neighbors and friends stopped by as well, Bailey said.

“This is the Houston area, so everybody helps out with each other in times like this,” he said.

Bailey said there was an odor of gas, and Spring firefighters were on scene.

CenterPoint spokeswoman Olivia Ross said the gas has been turned off and all indications are the meter there is not damaged.

Somerville police were reporting the entire town was without power at 10 p.m. Friday, according to the log.

The Houston Chronicle facility on the Southwest Freeway was among the buildings to lose power, which may have caused some delivery delays of Saturday’s newspaper. Readers can access today’s stories at houstonchronicle.com.

The risk of severe weather had mostly passed as Houstonians began waking up Saturday morning. The line of storms was in Louisiana as of 8:30 a.m., Reilly said.

“Gusty northwest winds should be expected for much of today as cooler, drier air moves into Southeast Texas,” forecasters wrote.

Material from the Associated Press was used in this report.

Published in Tornadoes, US News and Weather