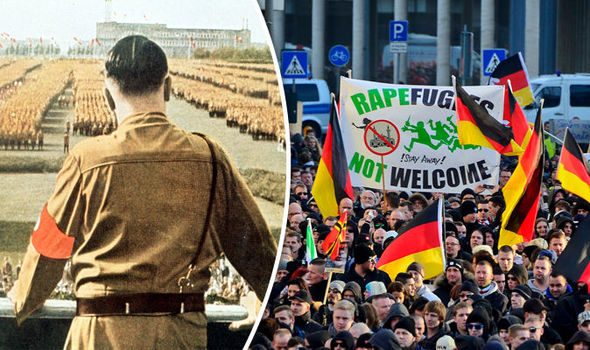 A SHOCKING new poll has revealed one-in-10 Germans want a new Fuhrer, who would use…

A SHOCKING new poll has revealed one-in-10 Germans want a new Fuhrer, who would use a “firm hand for the common good” and establish a “dictatorship in the national interest.”

The survey, conducted by the University of Leipzig, also revealed a huge number of German citizens are now extremely worried about immigration in their country – with special emphasis on Muslim immigrants.

A huge 34 per cent of the 2,240 respondents declared the country “dangerously overpopulated by foreigners”, with half saying they sometimes felt like a foreigner in their own country.

Four out of 10 even called for a blanket ban on Muslims travelling to Germany, while 11 per cent said Jewish people have too much influence.

In a worrying throw-back to the 1930s and 1940s, 12 percent of respondents said German people are “superior” to other people.

German Chancellor Angela Merkel has been blasted for her open-arms policy to the migrant crisis, with a huge number of those surveyed expressing concerns about the number of people admitted to the country.   READ MORE…