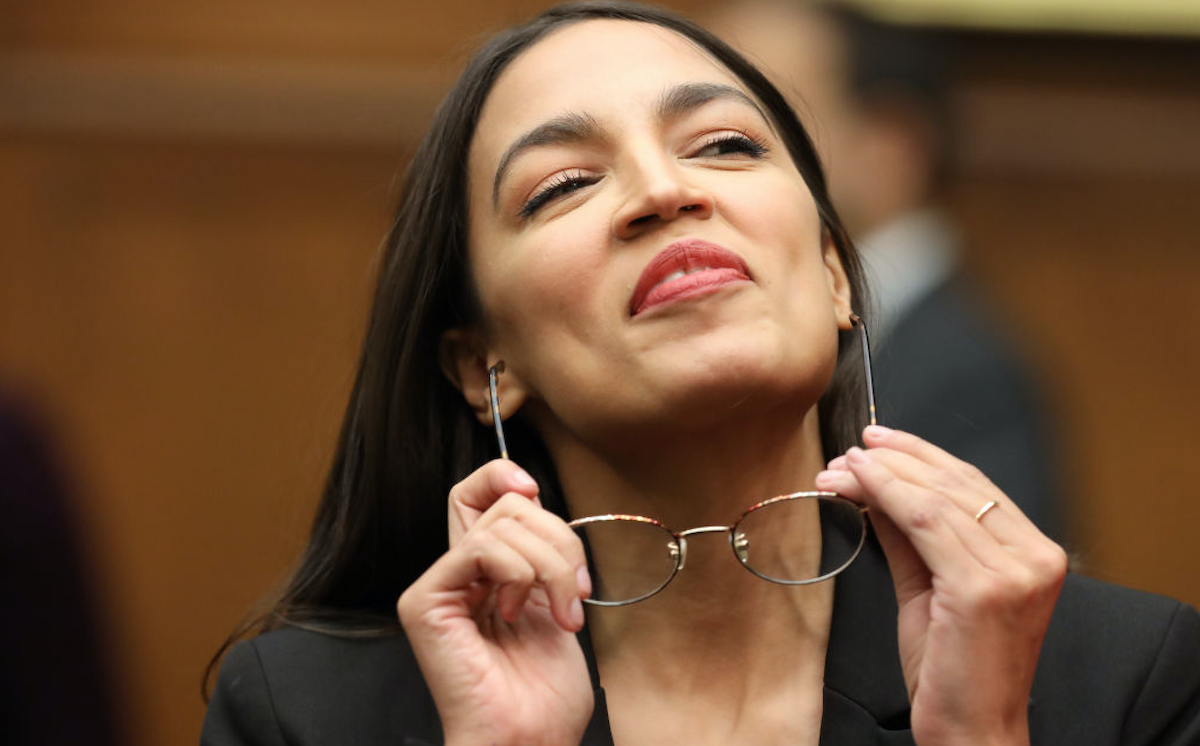 On Wednesday, Rep. Alexandria Ocasio-Cortez (D-NY) took a swipe at Texas political leaders, propounding that the suffering Texans are experiencing because of the freezing cold and concomitant power outages could have been addressed by her “Green New Deal.”

Ocasio-Cortez tweeted, “The infrastructure failures in Texas are quite literally what happens when you *don’t* pursue a Green New Deal. Weak on sweeping next-gen public infrastructure investments, little focus on equity so communities are left behind, climate deniers in leadership so they don’t long prep for disaster. We need to help people *now.* Long-term we must realize these are the consequences of inaction.”

The infrastructure failures in Texas are quite literally what happens when you *don’t* pursue a Green New Deal.

Critics savaged Ocasio-Cortez’s perspective on what went wrong in Texas and her ideas for solving it. Former Virginia congressman Denver Riggleman fired back: “This is ‘quite literally’ false. There are many factors that contributed to the Texas situation, most evident being a winter storm (things like cold and ice) and lack of preparation. Facts and analysis are the answer, not rhetoric.”

This is “quite literally” false

There are many factors that contributed to the Texas situation, most evident being a winter storm (things like cold and ice) and lack of preparation.

Facts and analysis are the answer, not rhetoric. https://t.co/YwkD2HFbUN

Conservative pundit Erick Erickson had some choice words as well: “Yes the snow covered solar panels and frozen wind turbines would have been so much more effective by themselves.”

Yes the snow covered solar panels and frozen wind turbines would have been so much more effective by themselves https://t.co/iqmo0foXYo

Chuck DeVore from the Texas Public Policy Foundation explained how Texas’ subsidies for green energy may have exacerbated the problem, writing in a Twitter thread:

Two problems in #Texas, one short-term and exacerbated by the long term issue, and one long term. The short term failure came at about 1 AM Monday when #ERCOT should have seen the loads soaring due to plummeting temperatures and arranged for more generation. Texas came very close to having a system-wide outage for the whole state (ERCOT area, about 85% of the state) due to not arranging for more generation. This tripped the grid, knocking some reliable thermal plants (gas and coal) offline.

This was a failure of the grid operator (ERCOT) not the power plants. In the last 4-5 years, Texas lost a net of 3,000 megawatts of thermal out of a total installed capacity 73,000 megawatts today. We lost the thermal power because operators couldn’t see a return on investment due to be undercut by wind and solar which is cheap for two reasons – it’s subsidized and it doesn’t have to pay for the costs of grid reliability by purchasing battery farms or contracting with gas peaker plants to produce power when needed, not when they can.

Meanwhile, Texas has seen a growth of 20,000 megawatts of wind and solar over the same period to 34,000 megawatts of installed capacity (they rarely perform anywhere close to capacity). This subsidized (state and federal) wind and solar have pushed reliable thermal operators out of business or prevented new generation from being built as operators can’t make money off of the market. This reduced the capacity margin – grids must have excess capacity to ensure stability. Texas is experiencing what California has – with California affecting the entire Western Interconnection due to its policies. Blackouts are a feature of the push to have more unreliable renewables on the grid. Must pay $$ for reliable backup w/ renewables.

Texas GOP governor Greg Abbot went after ERCOT, which says of itself, “We manage the flow of electric power to more than 26 million Texas customers — representing 90 percent of the state’s electric load.” ERCOT reported on Tuesday, “ERCOT has directed local utilities to restore 400,000 households in the last hour. Generation availability is improving.”

In an interview with ABC 13 on Tuesday, Abbott called for ERCOT leadership to resign, saying, “This was a total failure by ERCOT. ERCOT stands for Electric Reliability Council of Texas … and they showed that they were not reliable. These are specialists, and government has to rely upon these specialists to be able to deliver in these types of situations.”

Abbott added: “This is something that I declared in advance … this is something that our team had been talking to them about in advance, knowing, in advance, the ultra-cold we were going to be dealing with. … There seemed to be a lack of preparation, and making sure we did have access to back-up power in the event that the power generators were incapable of generating power, but all that aside …. they should be providing greater transparency. They are a public entity. They deserve to tell you, as well as government leaders, exactly what is going and what is not going on and they are not stepping up and providing that level of transparency.”