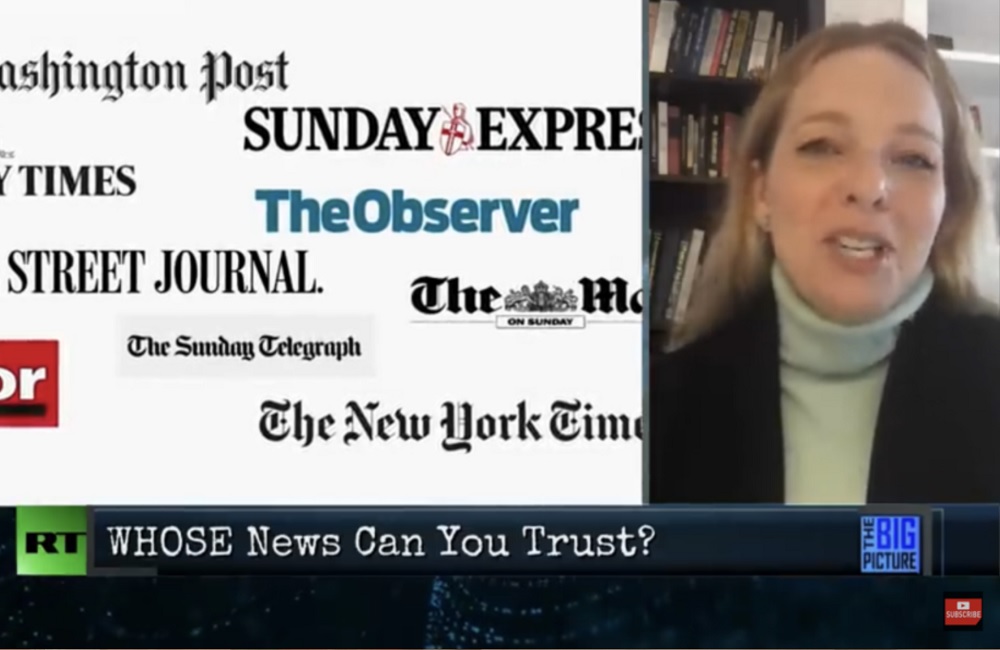 A professor Facebook has empowered to decide who can become a fact-checker is an open political leftist who has expressed animus against all Republican U.S. voters, according to recently uncovered documents exposing the official — and the process by which social media censors obtain their powers.

According to Jack Houghton of Sky News, the platform’s fact-checking certifier Margot Susca retweeted the claim that racism is “embraced by nearly half of the country’s electorate” in America, called herself a member of Hillary Clinton’s “team” in 2019, and on Russian propaganda network RT she insisted that the U.S. president’s speeches should not be broadcast. Susca is an American University journalism professor and has been a “certifier” for the International Fact-Checking Network since 2017.

ICFN is run by the leftist journalism nonprofit organization Poynter Institute, which claims to be nonpartisan but openly and far more frequently censors right-identified politicians, outlets, and ideas. Facebook uses ICFN to approve censors for its immense platform.

In her role, Susca has certified 19 fact-checking applications from organizations that include the obscure Chinese- and Democrat-funded Lead Stories. Lead Stories has been censoring stories from The Federalist and other non-leftist outlets despite making documented factual errors that boost Democrat-friendly narratives. Susca approved its application for Facebook fact-checker three times in a row.

Earlier this year, Susca spoke with Russia Today (RT), Vladimir Putin’s chief international propaganda network. The Kremlin-cashed outlet has been labeled by none other than President Obama’s Secretary of State John Kerry as a “propaganda bullhorn,” is a registered foreign agent in the United States, and is described by its own editor-in-chief as a tool by which Russia can wage “the information war, and what’s more, against the whole Western world. ”

In her feature interview for the outlet, Susca explicitly described her inability to be objective about President Trump, stating, “It’s hard for me to be an objective observer of this presidential administration when for years now they have continuously tried to delegitimize and marginalize news reporters for doing their constitutionally protected job.”

In the interview for RT, Susca also called White House Press Secretary Kayleigh McEnany a liar, promoted the Washington Post, and spoke of the “great journalism being done” within RT studios.

From Russia to China, with Love

Susca played a direct role in approving Chinese-funded fact-checker Lead Stories, according to IFCN documents. She was the assessor of three of Lead Stories’ applications for working for Facebook as a fact-checker, and she approved the organization each time.

According to those applications, Lead Stories also receives monthly funding from the Democrat National Committee and the Democratic Congressional Campaign Committee for use of its proprietary software that flags Internet activity as it starts to trend.

Lead Stories, which now possesses the power to censor stories on Facebook as a result of Susca’s approval, is also partly bankrolled by Beijing-based ByteDance, according to Lead Stories’ own website. That’s the same Chinese mega-corporation that owns TikTok, which the Trump administration has moved to ban due to its use of Americans’ data obtained through the TikTok app as part of Chinese global surveillance efforts.

China is known for running one of the world’s most effective online firewalls, maintaining near-absolute control of information in the authoritarian state by repressing stories that do anything from poking fun at Communist Party leader Xi Jinping’s resemblance to Winnie the Pooh to hiding evidence of widespread government persecution of the Uighurs in Xinjiang province.

The U.S. Department of Justice has labeled ByteDance a “mouthpiece” for the Chinese government and in a publicly released memorandum described how the company “underwent organizational restructuring with the CCP (Communist Party of China) now built into it.” According to the memorandum, it also pledged to follow CCP directives and has signed a cooperation agreement with a Party security agency. It also receives cash from the Big Tech companies that claim their fact-checking outfits are independent.

Since its instatement as a fact-checker due to Susca’s approval, Lead Stories has played a direct role in censoring news about the Georgia election, then censoring criticisms of its censorship from The Federalist. The story began with news about the explosive security video showing Georgia ballot counters seemingly pulling trunks of ballots out as soon as external observers had been told to leave.

This was promptly censored on Facebook by Lead Stories, claiming the videos had been debunked. As Federalist Editor Mollie Hemingway wrote in her piece on the subject, however, the Lead Stories fact-check included false information on the Trump campaign’s lawsuit there, and uncritically relied on an official’s claims while ignoring media reporting and affidavits to the contrary.

Prior to this article even being posted on Facebook, Lead Stories preemptively censored it, regurgitating the exact same talking points that Hemingway addressed in her article. As of December 13th, the story is still being censored by Facebook. When Facebook censors one page from a website, it also automatically throttles other traffic to other pages that website, wholesale punishing publishers that run afoul of their fact-checkers.

A Constellation of Censorship

The newly released documents highlight just a small part of the murky matrix of journalists, company officials, and self-professed nonpartisan experts in charge of Facebook’s censorship. The company outsources much of this muscle to a host of satellite groups. Yet all of them receive funding from the internet giant.

In addition, as journalism as an industry dies, due partly to social media siphoning ad revenue and eyeballs away from independent and local media, the Big Tech-funded “fact-checking” ecosystem is becoming a new source of employment and revenue for the journalists their business model has displaced. Big Tech has effectively replaced independent reporting with Big Tech-controlled propaganda.

The appointed groups possess immense power over the platform’s censorship tools, selecting which outlets will be targeted and expunging those they choose from the public’s eye. These include limiting the distribution of disfavored reporting by forcing stories to the bottom of news feeds, making them impossible to find via explore functions, and hiding posts. The “fact-checkers” can demonetize and even ban publishers if their writers cross them too many times.

These powers appear to be increasingly used by the platform, taking down stories even without proven factual inaccuracies. Recently, reporting such as the New York Post’s Hunter Biden story has been preemptively hidden, as well as a variety of reporting on potential election irregularities.

These occurrences are not limited to Facebook, either. A wide range of big tech platforms, including Twitch, Twitter, Patreon, and Instagram are using very similar powers to very similar ends. But Facebook’s 2.7 billion users, among which are nearly 200 million Americans who use it as a news provider, means their censorship is far more potent than that of any other U.S. platform.

While Facebook’s official description of its certifiers states they are committed to “nonpartisanship,” “transparency,” and “fairness,” a look under the hood with one who played an instrumental role in approving a foreign- and Democrat-funded fact-checker that has a record of bias and inaccuracy is going on RT to talk about how she just can’t be objective about Republicans.

Susca’s example demonstrates exactly why conservatives are suspicious of the fact-checking system behind Mark Zuckerberg’s nonpartisan talk. Facebook is, after all, using a left-wing activist who has featured on actual disinformation networks to certify what is fact and what is false to 200 million Americans who now have fewer tools for finding out what Facebook doesn’t want them to know.

Jonah Gottschalk is an intern at the Federalist. He studies Modern History and International Relations at the University of St Andrews.

Published in Election 2020, Opinion, Political News, Trump and US News