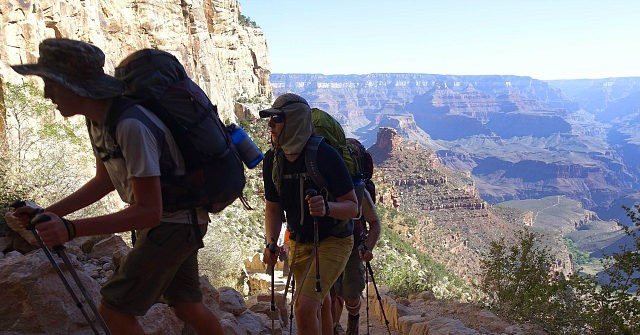 ABC reported on a National Park Service study that said…

Elements of the left are claiming now that America’s national parks are built on systemic racism.

“The outdoors and public lands suffer from the same systemic racism that the rest of our society does,” Joel Pannell, associate director of the Sierra Club, said in an ABC report, titled “America’s Great White Outdoors.” The report called the parks “stubborn bastions of self-segregation.”

“If we don’t address this, and we don’t see how all these things are interrelated, then we’re going to risk losing everything,” Pannell said. “You’re not going to have public lands to enjoy.”

The report is part of a wave of sometimes violent protests taking place across the nation after the death of George Floyd, a black man who was killed while being arrested by Minneapolis police on Memorial Day. All four officers involved in the arrest have been charged in the case.

ABC cited a National Park Service Study but did not link to it:

New government data, shared first with ABC News, shows the country’s premier outdoor spaces — the 419 national parks — remain overwhelmingly white. Just 23 percent of visitors to the parks were people of color, the National Park Service found in its most recent 10-year survey; 77 percent were white. Minorities make up 42 percent of the U.S. population.

The U.S. Census Bureau projects people of color will be a majority in America by 2044 — a demographic shift that will impact park attendance and finances. Community advocates say physical and mental health for minority communities is also at risk.

Ironically ABC reached out to National Park Service Acting Director David Vela, President Donald Trump’s nominee for the post and the first Latino to hold the position. Vela has been at the NPS since 2017.

“That tells me that we’ve got a lot of work to do,” Vela said.

ABC said federal government officials and environmental activists both see the “racial disparity in the outdoors is an existential crisis.”

ABC interviewed minorities who are nonetheless enjoying the outdoors.

“I feel like nature is a right to everyone, and we should all feel safe enough to experience it,” Lauren Gay, a Tampa, Florida, mother told ABC. She has a blog and podcast called, “Outdoorsy Diva.”

“We need better ways to cope with stress, to cope with some level of trauma. We all have some level, honestly, of PTSD from a lot of the things we’ve lived through as people of color — and nature is a way to do that,” Gay said.

“The future of our country is more and more diverse, … we’re going to have more people of color in this country than white people, but our parks, our green spaces, our conservation spaces, those demographics are remaining white,” Ambreen Tariq, creator of the “Brown People Camping” social media campaign, said in the ABC report.

She said she learned how to camp after her family moved to Minnesota from India.

“Still, racial profiling and stereotyping remain a big concern for Tariq and many people of color in the outdoors,” ABC reported.

“When I was a child, I felt like an outsider trying to gain entrance, except now I am American and this is my country,” she said.

“We are urging people who are maybe having this conversation for the first time to do the work. It’s not just about a moment. It’s about committing yourself to completely change your lifestyle,” Danielle Williams, a fourth-generation Army veteran who leads the “Diversify Outdoors” coalition, said in the ABC report.

The ABC reported on efforts aimed at “diversifying the outdoors”:

Many advocates say public information about parks and outdoor activities are not tailored to communities of color. Posted signs, for example, are mostly in English rather than Spanish. Park ranger uniforms that resemble what is worn by law enforcement are intimidating to some immigrants and minorities in light of documented cases of profiling.

Sierra Club’s Pannell said in the ABC report that the creation of national parks was racist.

“In many ways, they are created by removing indigenous people from those lands and creating refuges for more affluent white people to get away from the city, which were becoming black and brown,” Pannell said. “So we have to — we have to deal with that history and that legacy.”

“Vela said he recognizes that history and fear it instills and is developing strategies to combat it,” ABC reported.

“We have to be responsive to those needs and — and deal with those needs because they’re going to be different. And it’s going to require a different approach. And so, we have to own that,” Vela said.

“I think that as a person of color, I think that our national parks and what I’ve found, is opportunities to really reflect on the most difficult and challenging times in our nation’s history,” Vela said.

Vela also said he was against removing any confederate statues in national parks.

“If we do that on park land we then remove the stories that they contain. And if those stories are further sanitized in the history text, we can — we may completely lose that narrative. We can’t,” Vela said.