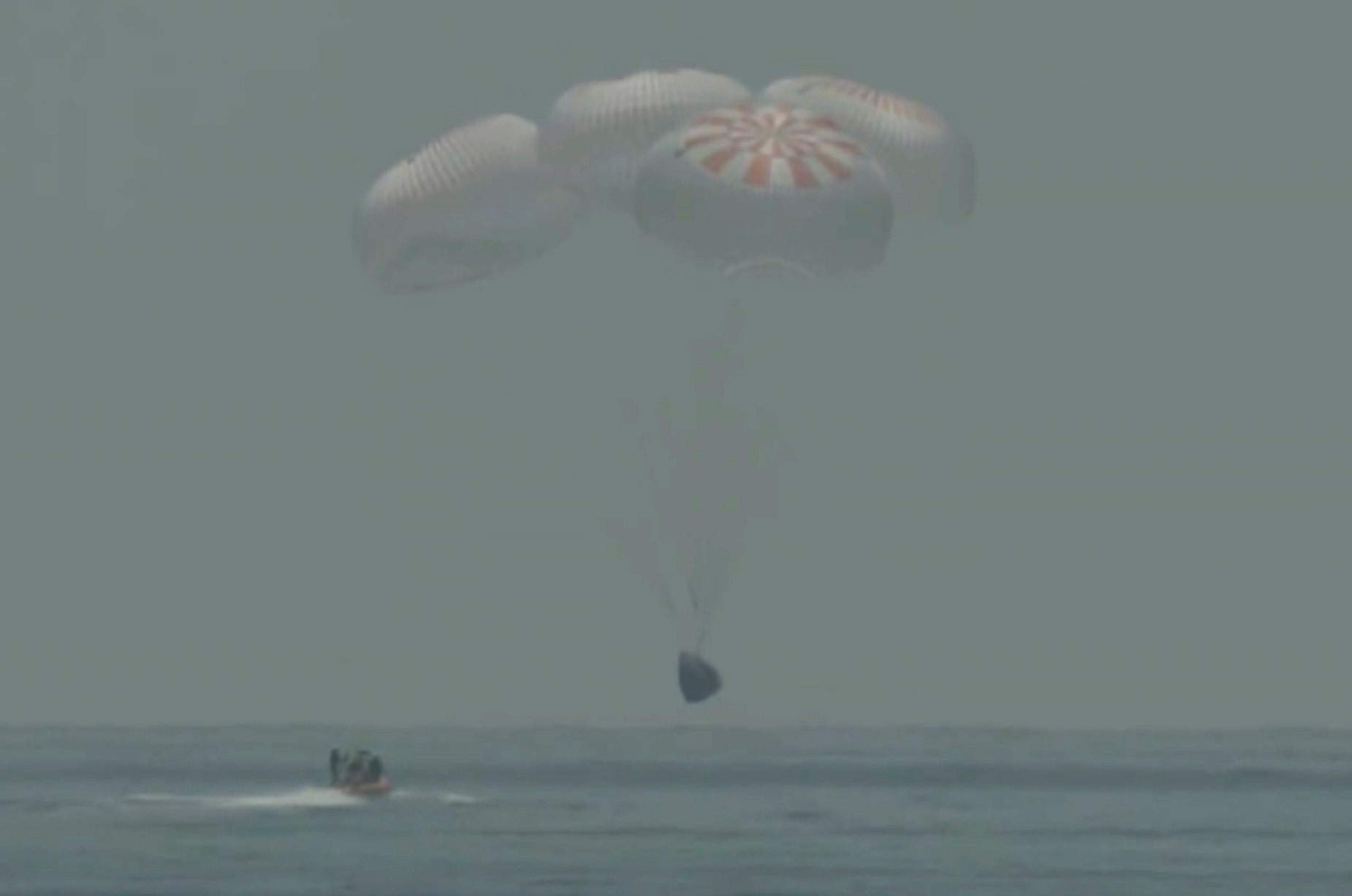 NASA astronauts Doug Hurley and Bob Behnken splashed down in the Gulf of Mexico in a SpaceX Crew Dragon spacecraft Sunday, ending a historic two-month trip to space.

The mission marked the first time that astronauts have launched from American soil since the final Space Shuttle flight in 2011.

After deploying two drogue parachutes and then the capsule’s main parachutes, the spacecraft landed off the coast of Pensacola, Fla., at 2:48 p.m. EDT.

The spacecraft, named “Endeavour” by the astronauts, left the International Space Station (ISS) on Saturday. Hurley and Behnken, both veterans of Space Shuttle missions, had boarded the orbiting space lab May 31 following the eagerly-anticipated launch of the Demo-2 mission from Kennedy Space Center atop a SpaceX Falcon 9 rocket.

In this frame grab from NASA TV, the SpaceX capsule splashes down Sunday, Aug. 2, 2020 in the Gulf of Mexico. (NASA TV via AP)

With wind at 2 knots, weather conditions for the capsule’s return to Earth were ideal. The capsule was hoisted aboard the SpaceX recovery ship Go Navigator and its hatch was opened at 3:59 p.m. EDT. Behnken was the first to exit the capsule, giving a thumbs up to the recovery team. Hurley followed shortly after, also giving a thumbs up.

“Great to have NASA Astronauts return to Earth after very successful two month mission. Thank you to all!,” tweeted President Donald Trump.

The capsule being lifted onto the SpaceX recovery ship Go Navigator. (NASA TV)

“It was an honor to witness history as @NASA  and @SpaceX  launched American astronauts on an American rocket from American soil to the @Space_Station  in May. Today, we welcome home @AstroBehnken & @Astro_Doug! On behalf of a grateful Nation, thank you!” tweeted Vice President Mike Pence, who is chair of the National Space Council.

The SpaceX Crew Dragon spacecraft lifted off on May 30 amid a blaze of publicity. Previously known as capsule 206, the spacecraft was renamed Endeavour, continuing the tradition of astronauts naming their capsules.

The capsule with its four main parachutes open. (NASA TV)

The mission is an important milestone in the space agency’s Commercial Crew program.

Fox News’ Peter Aitken and the Associated Press contributed to this article.

Published in NASA and US News