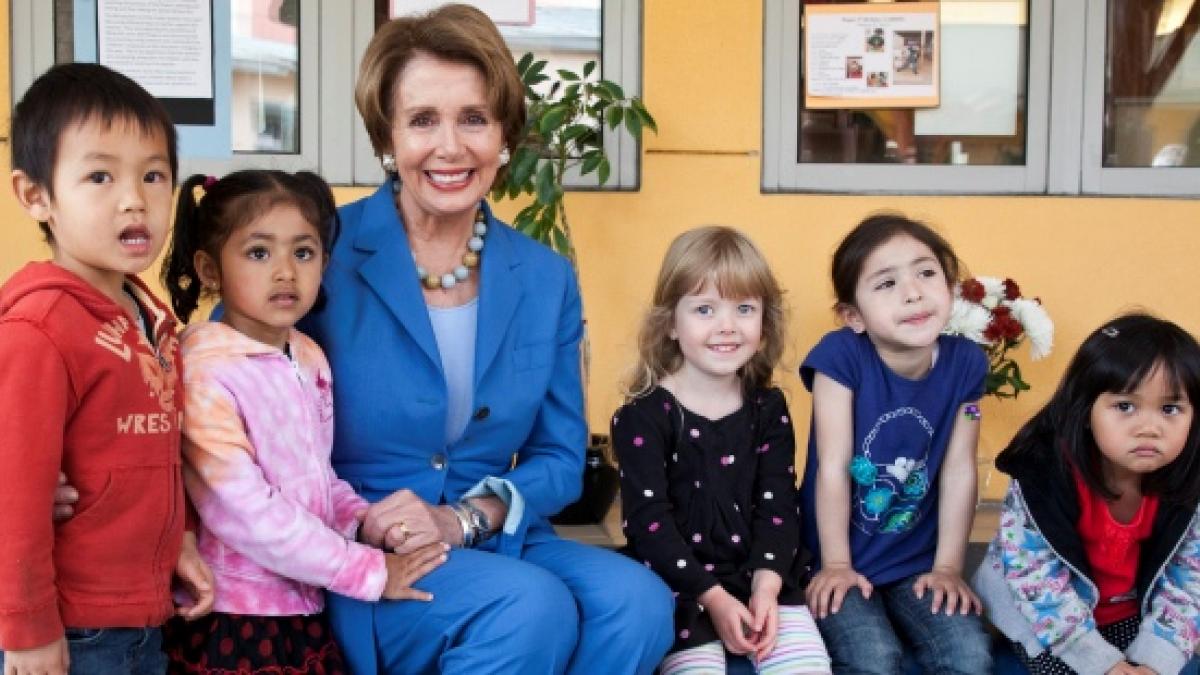 Democrat House Speaker Nancy Pelosi personally rents office space to a child welfare group, First 5 San Mateo County, that was set up by a convicted pedophile. The group partners with a nonprofit that ran a group house where child molestation occurred and partners with a conflict resolution center that had a volunteer convicted for storing hundreds of images of child porn. NATIONAL FILE has exclusively obtained the lease documents showing that Nancy Pelosi is the group’s landlady dating back to 2002, the same year monstrous pedophile Dr. William Ayres was given an award by city politicians for his work with the group. By that time, numerous pedophilia allegations including a police report had been made against Ayres, who was later convicted on pedophilia charges in 2007 and died in prison.

First 5 is a statewide supposed child welfare group in California that was previously chaired on a state level by Rob Reiner, and is funded with cigarette tax money. California is in the middle of a massive crisis involving child sex trafficking allegations and pedophilia arrests in the Child Protective Services (CPS)/foster care system. In fact, California does not even send out an Amber alert for missing foster care children, instead counting them all as runaways. San Mateo County, where pedophile Ayres set up the local First 5 chapter that calls Pelosi landlady, is arguably the center of the child sex trafficking crisis in California. Nancy Pelosi spends a lot of time in San Mateo due to her friendship with San Mateo lawyer and Democrat fundraiser Joe Cotchett. Cotchett, who is picking federal judges for the Biden administration, and was accused by his ex-wife in his divorce case of physically assaulting his children and being nude around his daughters. A partner in Cotchett’s law firm protects judges from her perch on the Commission on Judicial Performance.

Our source explained, “Pedophile Dr. William Ayres served with former San Mateo County District Attorney Jim Fox and former San Mateo County Supervisor Richard Gordon on the San Mateo County Children and Families First Commission (now called the First 5) in the early 2000s. Ayres designed the group in San Mateo. Rich Gordon was instrumental in having Ayres employed by the commission and honoring him with the lifetime achievement award. After his time on the board of supervisors in San Mateo, Democrat Rich Gordon became an assemblyman in Sacramento. There were red flags about Ayres for decades. I believe that First 5 knew because there is a broad representation on the commission.”

Pedophile Dr. William Ayres worked for the San Mateo Children and Families First Commission (which later became San Mateo County First 5) beginning in 1999. A source told NATIONAL FILE that Ayres designed and set up the First 5 chapter in San Mateo, and that for years thereafter he was involved as an informal adviser. “Ayres set up the program, and Ayres was always in the background of San Mateo First 5. Ayres always had the power in First 5,” our source said, until Ayres’ arrest in 2007. Elected official Rich Gordon, who brought Ayres into the fold to set up San Mateo First 5, served on the commission of San Mateo First 5 for years as a commission member and led meetings that were housed in the office space Nancy Pelosi rented to the group.

Nancy Pelosi Is First 5 San Mateo County’s Landlady, dating back to when the group was called the San Mateo County Children and Families First Commission and Ayres was still at large terrorizing children.

A San Mateo County Commission resolution authorized Borel’s lease, stating, “Resolution (065601) authorizing: 1)A lease agreement with the Borel Estate Company located at 1700 South El Camino, Suite 405, San Mateo area for the operation of the Children and Families First Commission for the term of October 8, 2002 through October 31, 2007, in the amount of $3710, monthly”

The Board of Supervisors gave Ayres an award in 2002 after authorizing it in December 2001.

NATIONAL FILE has obtained an official copy of the Second Amended lease agreement, showing that the leasing arrangement began in 2002 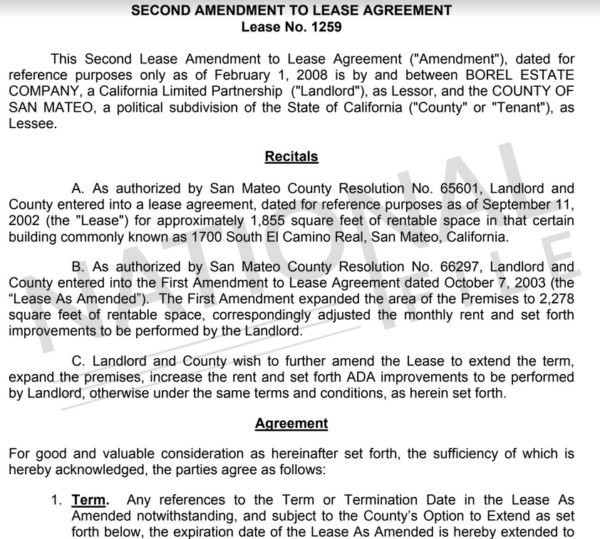 First 5 San Mateo County meetings have been held in the space Pelosi leases to the group, and meetings included Richard Gordon, the assemblyman who honored Ayres. 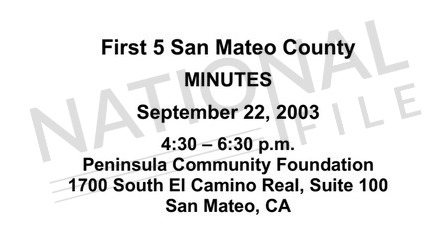 Pelosi’s landlord relationship with the San Mateo County Children and Family First Commission was mentioned in Peter Schweizer’s book Do As I Say, Not As I Do: Profiles In Liberal Hypocrisy, but without any reference to Ayres. 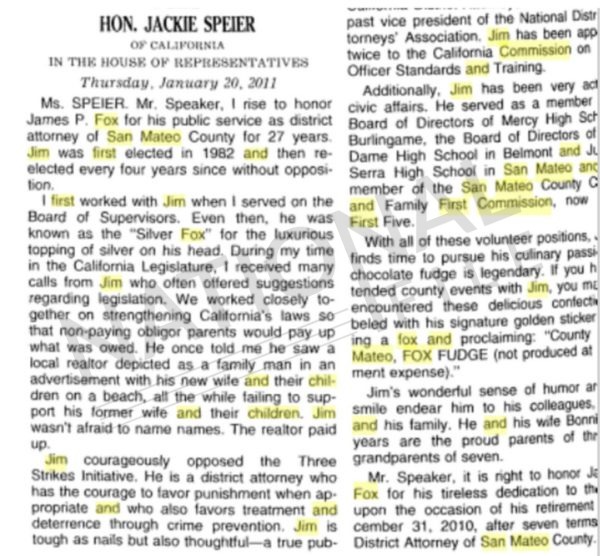 First 5 San Mateo rakes in millions of dollars per year from tobacco tax revenue thanks to Rob Reiner, who chaired the statewide First 5 organization until he resigned in 2006. During his chairmanship, Reiner did nothing about the Ayres allegations even after Ayres was sued in 2003 by someone who alleged Ayres molested him. 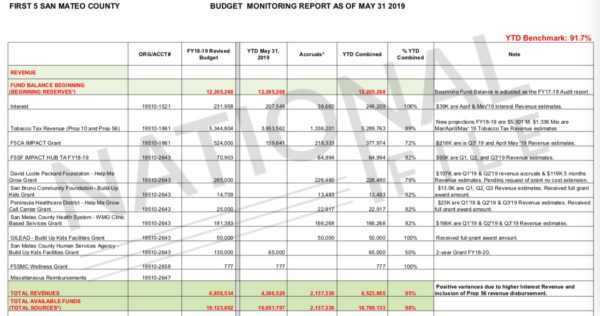 First 5 San Mateo County partners with a group called StarVista, a nonprofit that runs a group home where a counselor was convicted of molesting children. Assemblyman Rich Gordon, who worked with Ayres at San Mateo First 5 and led First 5 meetings in the office space the group rents from Pelosi, also works with StarVista.

In 2018, Patch reported (emphasis added): “Caceres was a counselor at Your House South, a group home run by the nonprofit StarVista, and had sex with a then-14-year-old girl there starting in December 2016, prosecutors said. After he was arrested in January 2017, another girl who was 13 at the time and lived at the same group home also came forward and said she was a victim of Caceres, leading to additional charges being filed against him, according to the district attorney’s office.”

San Mateo is rife with sex scandal. In 2007, federal authorities raided a network of Las Vegas brothels in an operation called Operation Doll House, which found illegal immigrant prostitutes. The San Mateo county sheriff and undersheriff were found inside a sleazy brothel during the raid, but were not prosecuted despite media scandal. Democrat congresswoman Jackie Speier later held a gun buyback in 2013 with a sheriff who was present in the brothel, and headlined another gun buyback in 2018 with the other law enforcement officer who was present in the brothel. 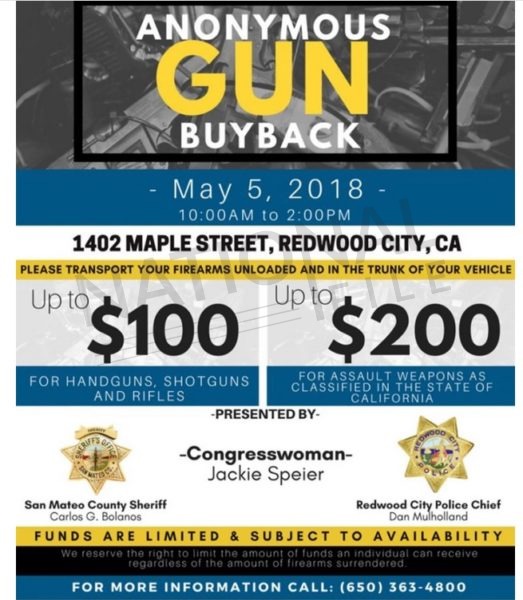 In 2007, East Bay Times reported on the glaring signs that Ayres was a pedophile, many years before his arrest, in an article entitled “Red Flags Surfaced Before Doctor’s Arrest.” Here is an excerpt from that article:

“On Friday, Ayres, now 75 and retired, stood before a judge to face 14 charges of lewd and lascivious conduct in the molestation of three young male patients from the ages of 9 to 12 at the time. Long before the charges were leveled against Ayres on Friday, alleged victims said they’d raised the red flag about Ayres’ behavior. “This all could have been settled 20 years ago, and God knows how many kids he’s seen,” said Gregory Hogue, a 37-year-old former patient of Ayres who, in a MediaNews interview last year, said the psychiatrist molested him. “Twenty years ago, I thought it was just me.”

But, as another former patient who sued Ayres in 2003 and settled noted Friday, it’s hard to believe former juvenile delinquents. “I can only think that a lot of people were like me,” said the 43-year-old man. “They were embarrassed and ashamed about what happened. A lot of them were delinquents, referred by the county, and nobody would believe them anyway.”

During the last 40 years of Ayres’ career in California, there have been at least two known police reports filed by former patients who said Ayres molested them, and there was the civil suit brought against Ayres in 2003. As part of the civil suit, it came to light that a Folsom County inmate filed a police report alleging molestation by Ayres in the 1990s.

It’s unknown what happened to that report. Attorneys on both sides have declined to release the details of the settlement, which does not admit guilt on Ayres’ part. After the civil suit, men came forward alleging molestation dating to the ’60s, but their cases were too old under the state’s statute of limitations.

Childhood sexual assault charges can be brought only by victims who are younger than 29, or if the alleged abuse occurred after Jan. 1, 1988.

Asked why the county and the courts continued to utilize Ayres’ services when red flags were raised as far back as 1987, County Counsel Tom Casey said departments often don’t know what the police and District Attorney’s Office do. “It’s always difficult when there’s allegations,” Casey said.

Among the formidable challenges of the investigation, he added, was locating possible victims willing to face the ghosts of abuse and whose allegations would fall within the legal statute of limitations.

Hogue, now a resident of Santa Rosa, was one of the men who approached the police in 2005 with allegations of molestation. He told MediaNews last year that his school district sent him to Ayres in 1985 when he was 15, after he wrote a note to a classmate that was misinterpreted as a suicide threat.

In a police report, Hogue said Ayres once pulled down his pants and touched his penis, saying he wanted to see how “developed” he was. Hogue said he told his mother what happened, and she informed her therapist, who made a report to the county’s Child Protective Services in 1987.

According to the CPS report, the case was referred to San Mateo police, who deemed the complaint unfounded. Hogue showed the original CPS report to police when they re-interviewed him in fall 2005. Hogue filed a complaint against Ayres with the Medical Board of California in 2005. It’s unclear what happened to that report.

The man who filed the civil suit said Friday that he was 13 when he was sent to see Ayres. No one else was in the room, and the boy never told his parents what happened in those private visits until years later. “‘I can apply this cream,’” the man said the doctor told him, just before the alleged molestation began.

“I was a kid,” the man said Friday. “What am I going to do? You’re told to trust adults and obey them.”…The county paid Ayres $1,098 for three invoices from September 1995 to March 2003. In 2002, Ayres was honored by the Board of Supervisors for his achievement in the field, his service on the Children and Families First Commission (now called the First 5 Commission), and “for his tireless effort to improve the lives of children and adolescents.”

Ayres served on the board of the commission, which oversees First 5 San Mateo County, the education program for children from birth to age 5 funded by tobacco taxes. Ayres helped develop the commission’s strategic plan, issued in 2000…

1987: A molestation report is made by Gregory Hogue, who was sent to Dr. William Ayres in 1985. The case is investigated by the San Mateo Police Department and deemed unfounded.

1993-1995: Ayres serves on the American Academy of Child and Adolescent Psychiatry as its president.

2002: Ayres is honored by the San Mateo County Board of Supervisors for his lifetime achievement, commitment to children and service on the county’s Children and Families First Commission.

December 2003: A civil suit is filed against Ayres by a man who said the psychiatrist molested him in 1977 when the man was 13 years old.

July 2005: The lawsuit is settled. Details of the settlement are confidential.

October 2006: Court-appointed special master compiles a list of 800 former patients of Ayres’. Using the list, police contact patients to determine whether there were any molestation victims falling within the legal statute of limitations on such crimes.

April 5, 2007: Ayres is arrested on suspicion of 14 counts of lewd and lascivious acts with a child under 14 years old. The case involves multiple victims”

Published in Human Trafficking, Pelosi, Political News and US News