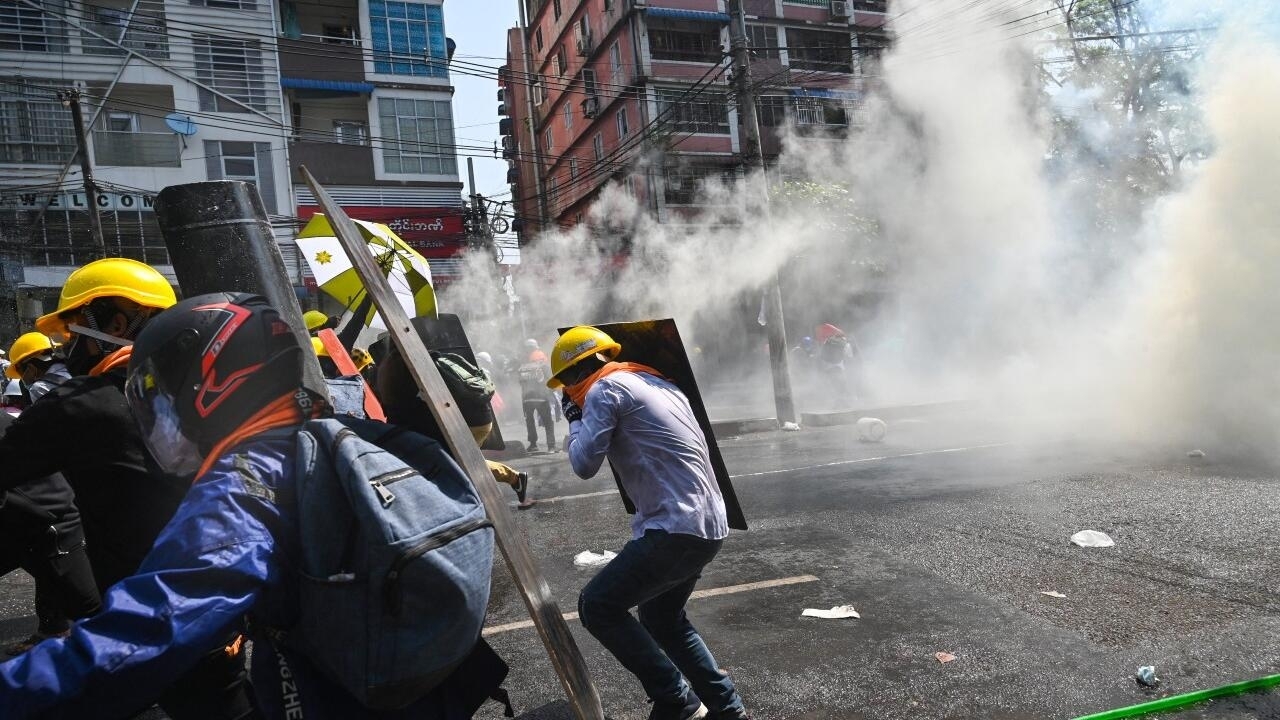 A Myanmar court filed two new charges against ousted leader Aung San Suu Kyi on Monday, a lawyer acting for her said, as protesters marched in defiance of a crackdown by security forces that killed at least 18 people the previous day.

Suu Kyi was accused of violating a communications laws as well as inciting public unrest, her lawyer said, as the ousted civilian leader took part in a court hearing via video link.

The 75-year-old has not been seen in public since her civilian government was toppled in a February 1 military coup, abruptly reversing Myanmar‘s transition to democracy.

She was initially charged with illegally importing six walkie-talkie radios. Later, a charge of violating a natural disaster law by breaching coronavirus protocols was added.

Suu Kyi looked healthy though she had perhaps lost some weight, and she asked to see her legal team, lawyer Min Min Soe told Reuters.

The incitement charge was added under a section of the colonial-era penal code prohibiting the publication of information that may “cause fear or alarm” or disrupt “public tranquility”, Min Min Soe said.

The next hearing will be on March 15.

Myanmar has been in chaos since the military seized power after alleging fraud in a November election won by the NLD in a landslide, with daily protests getting increasingly violent as police and troops try to stamp them out.

Police in the main city of Yangon used stun grenades and tear gas to disperse hundreds of protesters on Monday, witnesses said.

Demonstrators marched in the northwestern town of Kale holding up pictures of Suu Kyi and chanting “democracy, our cause, our cause”.

Live video on Facebook showed a small crowd in hard hats gathered across a street in the northeastern town of Lashio, chanting slogans as police marched towards them. Protesters also marched in the central town of Bagan.

There were no immediate reports of any casualties but the previous day, police opened fire on crowds in various parts of the country killing 18 people, the United Nations human rights office said.

The military has not commented on Sunday’s violence and police and military spokesmen did not answer calls.

The Assistance Association for Political Prisoners, a reliable monitoring group, estimated that about 30 people have been killed by security forces since the coup.

The army takeover brought a halt to Myanmar’s tentative steps towards democracy after nearly 50 years of military rule and has drawn condemnation from Western countries and growing concern among its neighbors.

The military has justified its takeover, ending a decade-long democratic experiment, by making unfounded allegations of widespread fraud in last November’s national elections.

Suu Kyi’s National League for Democracy won the election in a landslide.

The protesters’ “only crime is to want democracy and to not have to live under a brutal military regime”, said Tom Andrews, the UN special rapporteur for Myanmar, in an interview with FRANCE 24.

Andrews urged world leaders to take decisive action to end the bloodshed, by imposing sanctions on coup leaders and “a global arms embargo” on Myanmar.

Foreign ministers from the Association of Southeast Asian Nations (ASEAN), of which Myanmar is a member, will hold a special video meeting on Myanmar on Tuesday, Singapore’s foreign minister said.

“We will listen to the representative of the Myanmar military authorities,” the minister, Vivian Balakrishnan, told parliament.

Balakrishnan said last month there should be no violence against unarmed civilians. He called on Monday for the security forces to desist from the use of lethal force, for Suu Kyi’s release and for parties in Myanmar to discuss political solutions and a way back to democratic transition.

US Secretary of State Antony Blinken denounced what he called “abhorrent violence” by security forces, while Canada’s foreign minister, Marc Garneau, called the military’s use of lethal force “appalling”.

We condemn the Burmese security forces’ abhorrent violence against the people of Burma & will continue to promote accountability for those responsible. We stand firmly with the courageous people of Burma & encourage all countries to speak with one voice in support of their will.

The generals have for years shrugged off diplomatic pressure, partly because of the support of China and Russia.

The junta has promised to hold a new election but not set a date.

In a post dated February 28, the state-run Global New Light of Myanmar newspaper warned “severe action will be inevitably taken” against “anarchic mobs” even though the military had shown restraint.