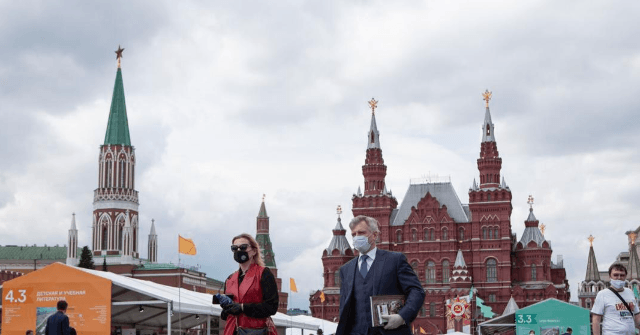 Moscow emerged from strict lockdown measures on Tuesday, relaxing the…

Moscow, Russia, emerged from strict lockdown measures on Tuesday, largely relaxing the rules on their mobility despite the high number of cases of the Chinese coronavirus still prevalent across the city.

After over a month of strict lockdown measures that required Muscovites to show digital passes to use public transport, and stringent rules on when and if they could go outside, the city resumed a semblance of normality as restrictions were lifted and Mayor Sergei Sobyanin declared that the pandemic was receding in the city.

Despite a reported fall in cases, critics accused Sobyanin of rushing the easing of lockdown to allow a military parade in Moscow’s Red Square to take place this month and a nationwide vote at the beginning of July that could extend President Vladimir Putin’s rule until 2036.

In a blog posted entitled “Returning to Normal Life,” Sobyanin insisted further restrictions would be lifted over the coming weeks, despite having warned last week it could take a year to return to complete normality.

“We have prevented an explosion of the pandemic, have provided mass testing and medical care to sick residents,” he wrote. “For several weeks now, slowly but surely the pandemic has been on the decline. The number of infections is decreasing, and more people are being discharged from hospitals than are being admitted. Step by step, this allows us to return to normal life.”

Businesses such as hairdressers and beauty salons reopened on Tuesday, while public facilities such as museums, libraries, cafes, and restaurants will be able to open outdoors from June 16th. The third phase, which begins the following week, will allow the resumption of indoor dining and densely attended facilities including gyms and swimming pools. Muscovites will be required to wear a protective mask at all times.

Russia’s response to the coronavirus has been marred in controversy, with many doctors and nurses complaining of a lack of personal protective equipment and adequate resources for dealing with the infected. Furthermore, four people have died under mysterious circumstances by falling out of windows after having criticized the Kremlin’s handling of the pandemic. Three of those individuals were medical professionals and the fourth worked for a government agency.

As of Wednesday, Russian authorities have recorded a total coronavirus caseload of 485,253, the third-highest a number of confirmed cases after the United States and Brazil, with 6,142 deaths. The epicenter of the outbreak has been in Moscow, which reported 1,572 new virus cases on Tuesday, its lowest number since April 16.