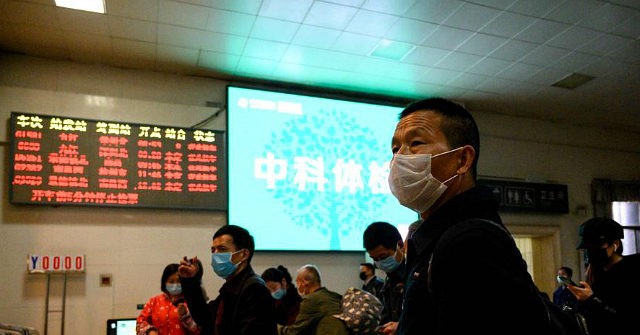 The media is celebrating that the coronavirus –– which has…

The media is celebrating that the coronavirus –– which has killed over 3,000 in China –– could be combating climate change as nations’ economies around the world are ground to a halt.

CNN reported on the “blue skies” in China in recent days:

Factories were shuttered and streets were cleared across China’s Hubei province as authorities ordered residents to stay home to stop the spread of the coronavirus.

It seems the lockdown had an unintended benefit — blue skies.

The average number of “good quality air days” increased 21.5% in February, compared to the same period last year, according to China’s Ministry of Ecology and Environment.

NASA, which promotes climate change on its website,  released images that show a reduction of nitrogen dioxide emissions from power plants and industrial plants during January and February — the height of the coronavirus pandemic in China.

“This is the first time I have seen such a dramatic drop-off over such a wide area for a specific event,” Fei Liu, an air quality researcher at NASA’s Goddard Space Flight Center, said in the CNN report. “I am not surprised because many cities nationwide have taken measures to minimize the spread of the virus.”

The Center for Research on Energy and Clean Air (CREA), an “air pollution research organization,” hailed the reduction of coal production, an energy source that helps save lives in China as a source for warming homes.

“We would very much advocate for China to foster this opportunity to transform its economy, to break apart from the old,” Li Shuo, a senior climate policy adviser for Greenpeace East Asia, said in the CNN report.

“There might be a round of economic stimulus which would inject cheap credits to heavy industries in China, and as a result of that we might see increasing pollutants and also carbon emissions in the second half of this year,” Li said.

But communist China is planning to reboot its economy.

“President Xi has made clear that workers and factories need to ramp up activity as soon as possible if the country is to avoid a steeper economic downturn,” CNN reported.

Published in China, Coronavirus, US News and World News