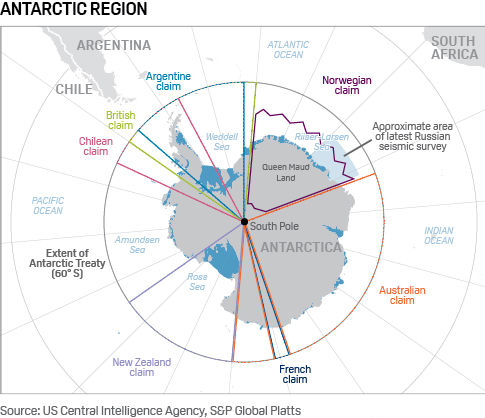 Meanwhile Russia and China want to annex Antarctica and its…

Moscow has now set its sights on the world’s most underexplored continent, Antarctica.

And its 513 billion barrels of oil and gas equivalent.

Given the march that it has stolen on everyone else in the exploration and development of oil and gas resources in the Arctic region, it should come as little surprise to anyone who knows anything of the ruthless single-mindedness of Moscow that moves are afoot to do exactly the same thing at the other end of the world, Antarctica.

According to an announcement in the last week, Russia’s state-run geological survey firm, Rosgeologia, undertook a major new seismic survey in the Riiser-Larsen Sea, off the coast of Antarctica’s Queen Maud Land earlier this year.

Moreover, Rosgeologia stated unequivocally that it did this 4.400 kilometre survey – the first seismic survey done in the area by Russia since the late 1990s – with the express purpose of ‘assessing the offshore oil and gas potential of the area using the latest technology’.

Amusingly, in a wry chuckle sort of a way for those who have had any serious dealings with Russia under President Vladimir Putin, there are those who cite all sorts of reasons why such plans cannot go ahead at least for the next few years.

But are the allowed?

Presumably these people were asleep when Russia rolled into Crimea, or Georgia, or unilaterally managed to engineer a change in the status of the Caspian from a lake to a sea in order to swindle Iran out of trillions of dollars of revenue, and probably believe that wolverines make good house pets as well.

Nonetheless, these innocents cite the 1959 Antarctic Treaty (signed by 53 separate countries) which, unlike the treaties governing the Arctic (which allow for hydrocarbons exploration and development), supposedly protect the Antarctic’s mineral resources in general, including potential oil and gas sites in particular.

According to the Treaty, the seven countries with a specific claim in Antarctica – Argentina, Australia, Chile, France, New Zealand, Norway, the U.K., (not Russia, it should be noted) – are limited to just non-military scientific research in the region.

Russia (and the U.S.) have nonetheless constructed research facilities within the areas claimed by these other countries (Russia’s is in Norway’s claim).

It is true that a number of these countries have more than likely been conducting clandestine analysis of their claims for the purposes of ascertaining the more valuable resources – such as oil and gas – that lie within their regions but not one of them has ever stated in such an in-your-face fashion that they are looking for oil and gas deposits for future development, aside from Russia.

Theoretically, the ban on mineral activity in the Antarctic next comes up for possible renewal only in 2048, however, given what Rosgeologia has found so far, Russia may decide to unilaterally bring this date forward by around 28 years or whatever is most convenient for it.

Oil and gas reserves in Antarctica

According to Rosgeologia’s seismic surveys and other related work since the 1970s to now, there is at least 513 billion barrels of oil and gas equivalent in Antarctica, although it is unclear as yet from the company whether this relates to the entire region or just the area that it has specifically surveyed so far.

Although it is believed by the innocents that no extensive testing specific to revealing oil and gas volumes has been done – that is the official line from all countries on this – the limited tests that have been done that would reveal this have shown huge potential.

Moreover, according to a number of senior oil and gas industry sources the Russians: “Have good cause to believe that there are huge oil and gas reserves not just in the area they tested earlier this year [in the Riiser-Larsen Sea and across much of Queen Maud Land] but across the entire region [Antarctica],” according to one of them.

There is a vast difference, of course, between the total resources in place and the recovery rate from such a challenging environment but that has never stood in Russia’s way before, especially when it factors in all of the other mineable and extremely valuable minerals that may also be there, if results from the Arctic is anything to go by.

Moreover, Russia has been at the forefront of these Arctic explorations ever since, including famously pitching its flag on the seabed under the Arctic in 2009. Since then, state-run behemoths, Rosneft, Gazprom Neft, and slick Western-style Novatek, have been at the forefront of all Arctic operations, with hundreds of billions of current and potential projects in view. The objective remains for offshore Arctic oil to account for 20-30 per cent of all Russian production by 2050.