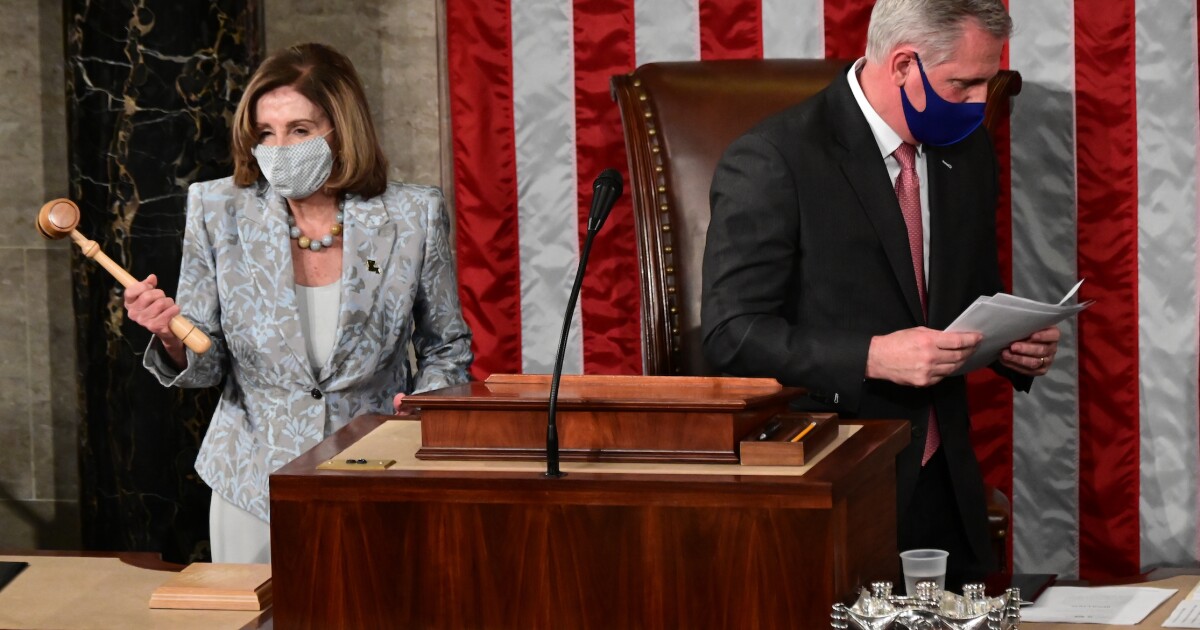 House Minority Leader Kevin McCarthy criticized the Democratic agenda and efforts to curtail the GOP in the coming Congress before handing over the gavel to newly-elected Speaker Nancy Pelosi.

Democrats elected Pelosi to serve a fourth, nonconsecutive term as speaker, but before she addressed the House, McCarthy used the minority leader’s traditional remarks ahead of the speaker to chide Democrats over planned changes to the House rules that will limit the Republican minority and punish some social media activity.

“Under these rules, all members are equal, but some are more equal than others,” McCarthy said. “As for our constituents, it means freedom of speech is silenced, good ideas are stifled, and dissent punished. Why would an American political party use this as their first action in a new Congress?”

McCarthy, a Republican, and Pelosi, a Democrat, are both Californians. McCarthy is eyeing the speaker’s gavel after the 2022 election, when Republicans hope to win back the majority.

He said voters in November sent a message that they are dissatisfied with Democrats and their progressive agenda.

“Two months ago today, the American people said enough,” McCarthy said. “Americans are fed up with it, and we Republicans are, too. As the Party of Lincoln, Republicans understand what it means to carry our constituents’ concerns with us at all times. We are a growing, working-class coalition of proud Americans — more energetic, united, and confident than ever before. We believe in the exceptionalism of this nation and aren’t afraid to say it.”

House Democrats plan to adopt a rules package for the 117th Congress on Monday that will change the way the minority can try to amend legislation. The rules change would essentially make it impossible for the GOP to win any last-minute amendments.

Democrats will also adopt a rules change that will make it an ethics violation for any member to circulate certain social media messages that are considered “deep fakes.”

Pelosi, in her acceptance speech, didn’t take any jabs at the GOP.

Instead, she touted rules changes aimed at diversifying Congress and advocating for the disadvantaged. The new rules for Congress establish a bipartisan Select Committee on Economic Disparity and Fairness in Growth.

The coronavirus pandemic, she said, “has pulled back the curtain on even worsened disparities in our economy and our society” and said Congress “must pursue justice: economic justice, justice in health, racial justice, environmental and climate justice.”

She said the “most urgent priority” of Congress will be defeating the coronavirus and said the latest coronavirus aid package, worth $900 billion, is not enough.

Democrats want a new round of aid that provides money to state and local governments who pay for essential workers.

“We owe them more,” Pelosi said.

Published in Health News, Political News and US News