The decision to forbid the display of a pro-police flag…

The decision to forbid the display of a homemade, wooden replica of the ‘thin blue line’ flag, donated to a Germantown police station by a father and son in honor of First Responders Day, sparked controversy in a Maryland county just outside of Washington, D.C. this week.

Montgomery County Police tweeted a photo of the flag after its donation, thanking the father-son team and promising to display it at the fifth district station, but the tweet prompted backlash on Twitter. 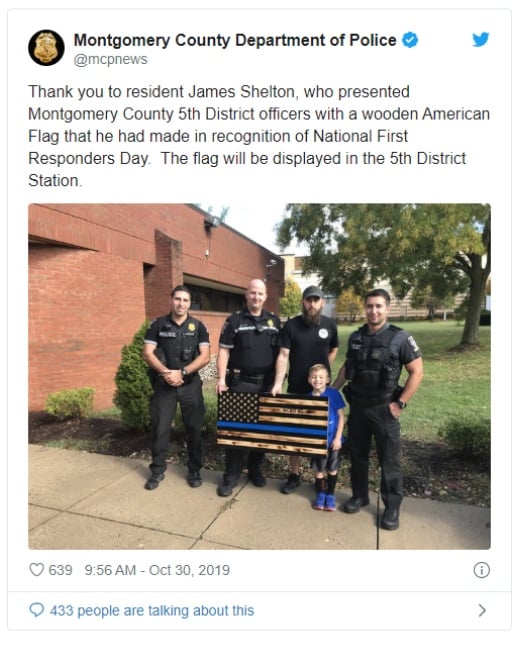 The “thin blue line” refers to the position of police in a society as the force, or line, which holds back chaos, and the donated flag is an American one in which one of the stripes towards the center is blue instead of red or white.

“Is this man wearing a Hammerskins shirt along with a matching tattoo?” one user wrote. “If so, would urge the Montgomery County police to consult the Anti-Defamation League’s database and decide whether hanging an object made by this person comports with department values.”

“Let’s take a breath here people,” the Montgomery County Department of Police replied. “The shirt and tattoo are of Mr. Shelton’s business, Shelton Woodworks. We are appreciative of Mr. Shelton’s flag and it represents support for police officers and first responders everywhere.”

Published in Law, Military, Political News and US News