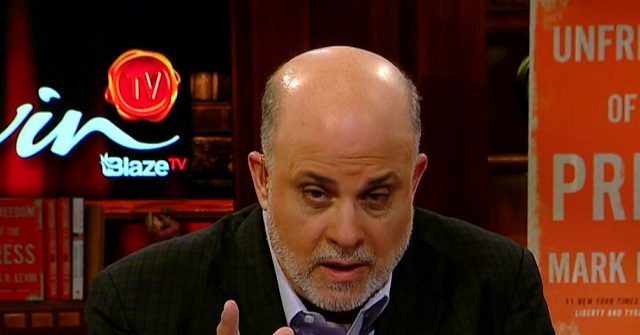 Senate Republicans should dismiss an impeachment trial of Donald Trump…

Senate Republicans should make an effort to dismiss an impeachment trial of President Donald Trump if House Democrats pass articles of impeachment against him, determined Mark Levin, host of his eponymous radio show, BlazeTV’s LevinTV, and Fox News Channel’s Life, Liberty, and Levin. He offered his remarks in a Monday interview on SiriusXM’s Breitbart News Daily with host Alex Marlow.

“The Republicans should fight it,” said Levin of the possibility of articles of impeachment being passed in the House and sent to the Senate for an impeachment trial. [Democrats] created their own disaster … and now they should be forced to live with it. If I’m [Chuck Schumer], I don’t want it, because [Adam Schiff] put their best foot forward.”

Levin continued, “[Adam Schiff] controlled this like the Soviet Marxists, and so they had the witnesses they wanted, they could cut off questions, and so forth, and they have have protected this whistleblower throughout, who’s not even a whistleblower.”

“If it goes to the Senate, those Republicans better pull that whistleblower in,” added Levin. “We need the face, the name, the background, [and] every single thing there is to know about this guy, because I think that’s the house of cards that’ll come down. You’ll see the conspiracy with [Adam Schiff] … in my view, [Alexander Vindman], and others. That’s crucial.”

Levin went on, “On the other hand, [the Democrats’] base is so nuts. I don’t think they’d be happy with anything short of the president hanging from a telephone pole, so they have to deal with this, and my guess is they’re trying to figure out the best way.”

Marlow asked Levin about the possibility of the House censuring Trump, a measure offered by Fox News Channel’s Chris Wallace.

“The only president to be censured was Andrew Jackson, and subsequently Congress reversed itself after he passed away,” responded Levin. “There’s nothing in the Constitution that supports censure. It doesn’t mean these knuckleheads can’t vote for censure, call this president a kumquat, or do whatever they want to do in that respect, but I think that’s their problem.”