Mar-a-Lago in the firing line: Iranian presidential adviser posts list of Donald Trump’s properties in chilling hint of an attack on his real estate empire – after Iran put an $80million bounty on his head 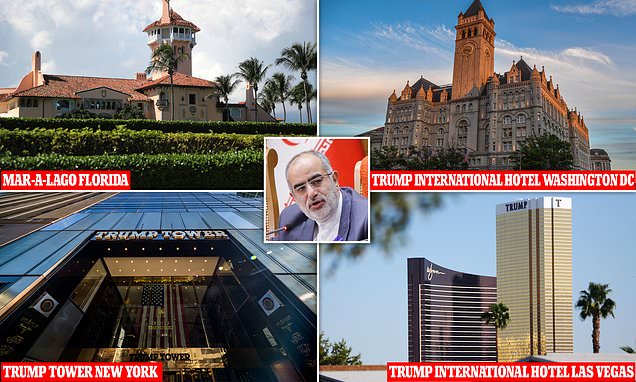 An adviser to Iranian president Hassan Rouhani last night dropped a chilling hint of an attack on Donald Trump‘s property empire in revenge for the death of military commander Qassem Soleimani.

Hesameddin Ashena shared a link to a Forbes article listing all of Trump’s properties in New York, his hotels and resorts across America and golf courses in the US and Britain.

The list included the Mar-a-Lago resort in Florida, where the president was staying when he ordered the hit on Soleimani, as well as the Trump International Hotels in Washington and Las Vegas and his New York tower with its Fifth Avenue entrance.

Iran has already threatened the White House and the Rouhani adviser declared yesterday that Tehran’s ‘sole problem is Trump’ rather than the American people – dropping another hint of a direct reprisal against him.

Tehran has sworn revenge for Soleimani’s death and yesterday announced it was abandoning its remaining nuclear limits under the 2015 deal.

Speaking to the crowds, the military commander’s daughter Zeinab declared that ‘families of U.S. soldiers in the Middle East will spend their days waiting for the death of their children’.

Trump has threatened his own retaliation if Iran hits US targets, warning of a ‘disproportionate response’ including cultural sites.

Today the president vowed in a capital-letters tweet that ‘IRAN WILL NEVER HAVE A NUCLEAR WEAPON’ despite Tehran’s latest move away from the nuclear deal.

‘We have ZERO problems with the American people. We even achieved deals with previous US administrations,’ Rouhani’s adviser Ashena said on Twitter last night.

‘Our sole problem is Trump. In the event of war, it is he who will bear full responsibility.’

The list of properties on the article he shared included Trump Tower as well as other New York City residences including Trump Parc East.

Elsewhere in America, the properties include hotels in Washington, Chicago and Las Vegas as well as a winery in Charlottesville, Virginia.

The Mar-a-Lago estate where Trump spent the Christmas holidays is also on the list, along with golf courses in Britain and Ireland.

The location of the properties is no secret, and many of them are named after Trump, but the post by a senior Iranian adviser was a clear hint of a possible strike against Trump’s real estate empire.

Ashena has previously spoken of ‘unseating’ Trump from office, writing in July that ‘we’ll make sure he stays a one-term President’ if he continued to listen to Mike Pompeo.

‘We have unseated an American President in the past. We can do it again,’ he said, presumably referring to Jimmy Carter who was brought low by the Iran hostage crisis which began in 1979.

One Iranian MP has already threatened explicitly to target the White House, warning of an attack on the US mainland in retaliation for Soleimani’s death.

‘We can attack the White House itself, we can respond to them on the American soil,’ Abolfazl Aboutorabi told a session of parliament.

Published in Military, Political News, Trump and US News