Update (1830ET): As the COVID-19 picture has improved across the US, LA County has just crossed the 1MM case mark, becoming the first county in the country to cross that benchmark. Public health officials have also confirmed that there’s at least one case confirmed case of the new mutant first discovered in the UK. The man who first had the strain is now quarantining in Oregon. .

“The presence of the U.K. variant in Los Angeles County is troubling, as our healthcare system is already severely strained with more than 7,500 people currently hospitalized,” said Dr. Barbara Ferrer, LA county’s public health director, in a statement. “Our community is bearing the brunt of the winter surge, experiencing huge numbers of cases, hospitalizations and deaths, five-times what we experienced over the summer.”

California has reported more than 2.9MM confirmed cases, according to NBC News counts. Texas, with 2MM cases, and Florida, with 1.5MM, are the next two states with the most infections. New York, which was one of the country’s first and biggest hot spots, has recorded 1.2MM.

Global coronavirus deaths have passed 2MM as of Saturday morning, while the US has topped 23.5MM. As daily case totals slowed in the US, Norway revealed that the Pfizer-BioNTech vaccine contributed to the deaths of more than 2 dozen people. But the biggest news overnight comes from Norway, where the government says 29 elderly people have died, and 80 have seen their health seriously impacted, due to the Pfizer-BioNTech vaccine.

Of course, readers of Zero Hedge won’t find this at all surprising. And deaths haven’t been confined to Norway, either. Another 55 have been reported in the US as well.

But in the US and most of Europe, the vaccine story hasn’t registered like fears of the mutated COVID-19 strains. B117, the strain first discovered in the UK, is believed to have contributed to the higher death rate in the UK.

India, meanwhile, is embarking on the largest vaccination campaign in the world, according to Bloomberg (at this point, it’s pretty clear that China has vaccinated millions more than the official numbers from Bloomberg and other US media outlets have published). On Friday, hospitals and vaccination centers across all of India’s major cities vaccinated 165,714 Indian patients who fit the priority category.

While PM Narendra Modi has insisted that Indians must ignore anti-vaccine propaganda, questions about the vaccine’s safety have swirled since India’s drug regulator gave the green light to Bharat Biotech International’s indigenously produced Covaxin shot this month even though it has yet to clear final-stage trials.

Global cases have topped 93.4MM people, and a growing number appears to be caused by the newer mutated strain, since the virus is “evolving”‘ much more quickly than the scientific community had expected. In Vienna, 17% of new cases are believed to be caused by the British variant. The number was derived from a survey of a random sample of COVID patients (closely examining a sample’s genetic makeup is more time-consuming and costly than simply running a test). 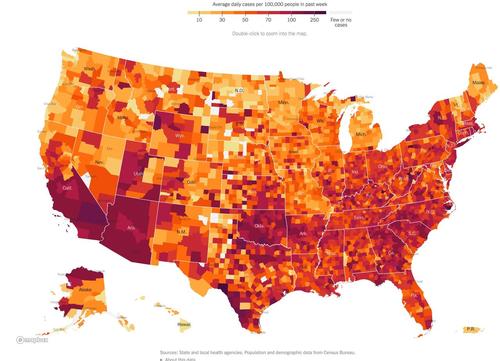 Circling back to the US, while deaths have moved higher over the past couple of weeks, new cases and hospitalizations are falling.

The chart below reflects the rate in average hospitalizations across the US.

Some more encouraging data: cases are falling in all four US regions (the northeast, southeast, Midwest and the west).

Here are some more stories from overnight and Saturday morning:

Ireland is blaming Christmas and related gatherings for the fact that the country is now seeing the highest rate of new cases in the world. Rampant infections since Christmas forced Micheál Martin’s government into a series of drastic lockdown measures that have closed schools, construction, hospitality and retail, leaving tens of thousands jobless again (Source: FT).

Russia decided to restart flights to Vietnam, India, Finland, Qatar on Jan. 27 after reviewing its stance on the pandemic. But Russia’s ban on flights to and from the UK will remain in place until Feb. 1 (Source: Bloomberg).

Portugal on Saturday reported the biggest daily increase in confirmed coronavirus cases since the start of the outbreak. There were 10,947 new cases in a day, more than the previous record of 10,698 announced on Thursday, taking the total to 539,416. The total number of deaths rose by 166 to 8,709, also a record daily increase (Source: Bloomberg).

Scentech Medical has developed a test that works like a blood-alcohol breathalyzer that detects Covid-19 with 98% accuracy in preliminary testing, the Jerusalem Post reported on Saturday (Source: Bloomberg).

* * *
Looking ahead, the there’s no question that the news out of Norway has rocked the world’s hope that the vaccine will end the COVID pandemic. The WHO and others have repeatedly warned that even people who have already vaccinated are still vulnerable, particularly if they have only had one dose.

The question is, will that stop the world from adopting “immunity passports”?