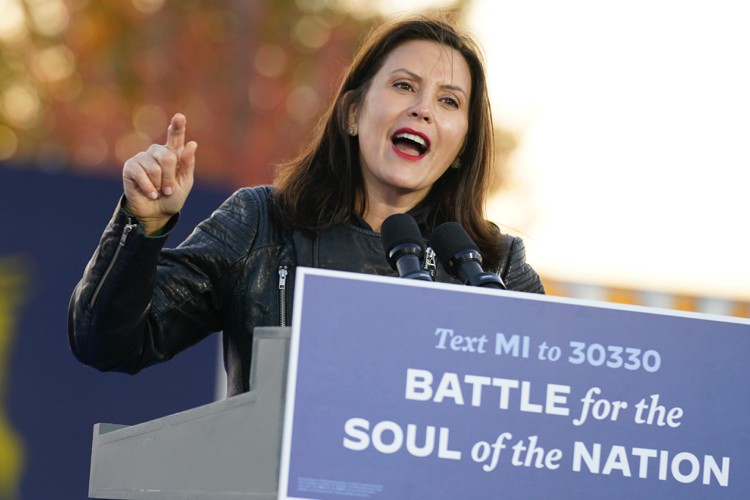 Conservatives must be an awfully peaceable bunch if you have to fabricate stories to make them appear violent. Many may draw this conclusion, yet again, given how Democratic Governor Gretchen Whitmer of Michigan and the rest of the Left have for weeks been claiming that the kidnapping plot against her was an example of Right-wing Extremism™. But this spin, already refuted via layman research, now has been revealed as false in official government documents.

According to a search warrant affidavit recently unsealed in federal court, one of the leaders of the plot to kidnap the governor “also threatened to hang President Donald Trump“ and kill the Republican governor of South Carolina, Henry McMaster. Barry Croft, the Delaware crank facing a federal charge of conspiracy to kidnap Whitmer, posted on Facebook in June that he’s “for hanging Democrats, Republicans and Libertarians.” As for Trump, Croft sounds remarkably simpatico with Rashida Tlaib, saying he’d like to “hang this mf’er too.”

All of this blows to pieces one of the left’s most useful fables.  Until now, the unquestioned story has been that the plotters — a hodgepodge of underachievers referred to by the feds as the “Wolverine Watchmen” — were Trump-supporters who took as their “go” order the president’s inartful [sic] “stand back and stand by” message to the Proud Boys at his September 28 debate. Anyone who watched the debate knows that the president’s words were nothing more than his futile attempt to denounce white supremacy to Chris Wallace’s satisfaction.

Governor Whitmer, who happens to be one of the Biden campaign’s co-chairs and “surrogates,” leapt at the political opportunity to trash her boss’s opponent. She ran to the media to announce, without a shred of evidence, that the president was “complicit” in the plot, and “that those who were plotting to kidnap her had ‘heard the president’s words not as a rebuke but as a rallying cry — as a call to action.’” Jesse Jackson claimed that the “connections” were “inescapable” that “[t]he plotters were emboldened“ by Trump’s “stand by” phrase. Rashida Tlaib knew that the kidnappers acted because Trump “didn’t do enough to condemn white supremacists.” Whitmer was even able to duck Trump’s criticisms of her despotic Wuhan virus lockdown by saying they were just putting female leaders like herself “at risk … [to] help his reelection.”

The Whitmer lie was easy to effect, too. In a frightfully divided country, she’s a now notorious left-wing governor, so the plot against her must have been right-wing, no?

No. While intuitive, this assumption reflects a misunderstanding regarding our political landscape and the Left in general.

The Whitmer plotters were leftists so far left that they’ve left sanity and even the “less extreme” Democratic Party wing. They continually tip their hand, too, and everyone would be on guard against them if the mainstream media actually told the truth (fanciful; yes, you can laugh).

It was in January that Project Veritas (PV) released undercover video (below) of one Kyle Jurek, a staffer for then-presidential candidate Bernie Sanders (I-Vt.), saying things such as that for liberals, it’s the “gulag. Liberals get the wall first.” Among those earmarked for death, Jurek mentioned the Clintons by name.

Then just last month, PV released video of Democratic operative Kris Jacks talking about randomly killing billionaires, mentioning guillotines, and planning violent revolution if President Trump wins. He also emphasized, do note, that 50 percent of his and his comrades’ struggle was with “f*****g moderates in the Democratic Party,” as he put it.

Oh, Joe Biden is safe, though. Jacks says that the Democratic presidential nominee does have “a functioning signing hand” (if, presumably, nothing else) and that he’s “confident we can occupy his [Biden’s] house.”

The aforementioned cases are just a couple of examples. Many more are found in my current New American cover story, “Violence, Inc.: A Leftist Enterprise.”

Of course, it’s not fair to say the Left has a monopoly on violence — just almost so. Where, for example, is the rightist analogue to the approximately 570 violent demonstrations that have erupted since May 26, the day after George Floyd’s death? I know, liberals slough this off, saying that 97 percent of the protests have been peaceful (but fiery)?

(And don’t worry about the poison in your tea: 97 percent of the liquid in that cup is not poison.)

Where is the rightist analogue to Bernie Sanders acolyte James Hodgkinson, who targeted GOP legislators in the 2017 congressional baseball shooting? (Quite coincidentally, I’m sure, ol’ Bernie attracts violent people like a rotting corpse does flies.)

Where are the über-radical rightists caught on video saying, “Conservatives get the wall first”? Of course, finding such a person in the Trump organization would mean wall-to-wall, 24/7 news coverage. In the case of Bernie and Kyle Jurek, we didn’t even hear of the latter being fired. It was another example of “journalism,” too — that is, the covering of “important stories, with a pillow, until they stop moving,” as Iowahawk put it.

The same technique is apparent with that really old news called history. For violent tendencies are the leftist default, as I explained in the 2017 New American essay, “The Bloody Left: The Dark History of Untrue Believers.” But it’s also covered up, by the media in particular and many “historians.”

And this is why leftists have to manufacture cases of rightist violence, à la the stone-faced Whitmer, and create a false equivalence between the “two sides.” For “by their fruits you will know them” — and being known before absolute power is achieved is the last thing the Left wants.