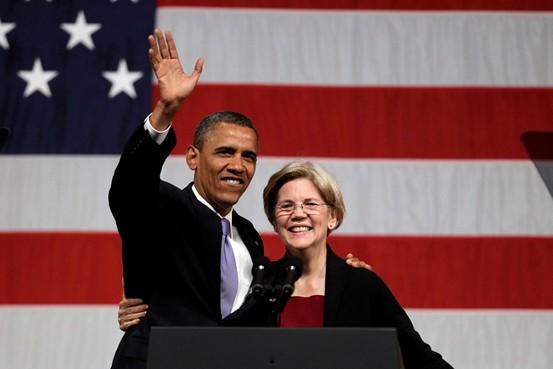 Over 200 former Obama staffers have thrown their support behind…

While Elizabeth Warren (D-MA) spent most of her campaign railing against the donor class while refusing to accept large checks from Democratic bundlers, former President Obama has been privately talking up the 2020 candidate who formerly identified as a Native American.

According to The Hill, Obama has advised reluctant donors to back the Massachusetts Democrat despite her plans to separate them from as much of their wealth as she can. If she becomes the nominee, according to Obama, donors will have no choice but to throw their support behind her.

The former president has stopped short of an endorsement of Warren in these conversations and has emphasized that he is not endorsing in the Democratic race.

But he also has vouched for her credentials, making it clear in these private sessions that he deems her a capable candidate and potential president, sources say. –The Hill

“He’s asked all of the candidates who have sought his advice three questions: Is your family behind you? Why you? And why now? She checked the box for all,” one longtime Obama ally told The Hill, adding “I think he feels licensed to give an opinion on her because he’s ‘hired’ her.”

Of course, Obama also hired 2020 candidate Julián Castro to be secretary of Housing and Urban Development, and then there’s Joe Biden – Obama’s former VP which he’s been awkwardly silent on this whole time. According to The Hill, Obama remains “incredibly fond” of Biden and is watching his campaign with interest.

No, it’s clear Warren is Obama’s pick for 2020, despite worries that Democrats in financial services “will have an issue with her,” according to the report.

“He obviously thinks she’s very smart,” said one Democratic donor, adding “He thinks her policy ideas matter. And I think he sees her running the campaign with the most depth.”

Obama’s praise of Warren is a contrast of sorts from his days at the White House, when the two were said to have disagreements on economic issues including the Trans-Pacific Partnership. The tension between the president and Massachusetts senator frequently became fodder around the administration.

Since then, the friction has continued to make headlines, including the time in 2015 when Obama was dismissive of Warren’s opposition to the TPP deal.

“The truth of the matter is that Elizabeth is, you know, a politician like everybody else,” he said in an interview with Yahoo. –The Hill