Is The Term 11th Hour Used In The Bible? What Does This Mean or Represent? 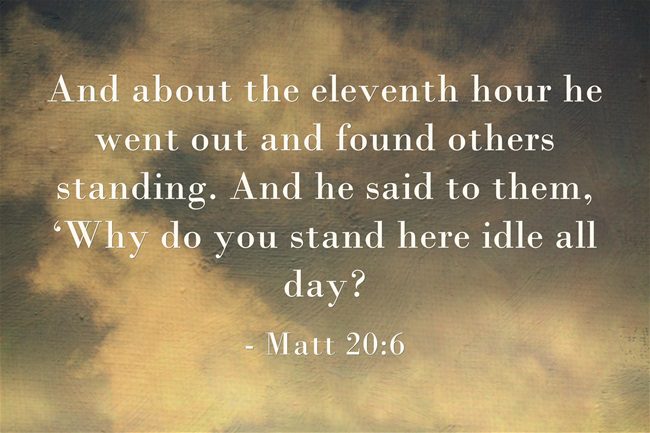 Is The Term 11th Hour Used In The Bible? What Does This Mean or Represent?

How is the phrase “the 11th hour” used in the Bible and what is it supposed to represent?

The words “eleventh hour” is found in only two places in the Bible but the symbolic nature of this phrase is found in many places in Scripture. If we understand how Jesus used this parable Matthew chapter 20 and the fact that right after the Parable of the Laborers in the Vineyard Jesus said “the Son of Man will be delivered over to the chief priests and scribes, and they will condemn him to death and deliver him over to the Gentiles to be mocked and flogged and crucified, and he will be raised on the third day” (Matt 20:18-19) it doesn’t seem coincidental because the parable points to the fact that we will receive our wages for what we’ve done on earth at the time of Jesus’ appearing. Many believe that we are living in the eleventh hour right now and that Jesus could return at any given moment.

The Kingdom of Heaven

Jesus gave the Parable of the Laborers in the Vineyard in Matthew 20 and it begins by Jesus saying “For the kingdom of heaven is like a master of a house who went out early in the morning to hire laborers for his vineyard. After agreeing with the laborers for a denarius a day, he sent them into his vineyard. And going out about the third hour he saw others standing idle in the marketplace, and to them he said, ‘You go into the vineyard too, and whatever is right I will give you.’ So they went” (Matt 20:1-5a). Every believer in Christ is called by God (John 6:44) so this “master of the house” is God Himself and He seeks out laborers to work in His vineyard which might represent the good works that God has appointed for us to do (Eph 2:10).

The term is finally used in Matthew 20:6-8 where Jesus says “And about the eleventh hour he went out and found others standing. And he said to them, ‘Why do you stand here idle all day?’ They said to him, ‘Because no one has hired us.’ He said to them, ‘You go into the vineyard too.’ And when evening came, the owner of the vineyard said to his foreman, ‘Call the laborers and pay them their wages, beginning with the last, up to the first.’” This is the time just before the laborers receive their wages and some worked all day and some only a few hours but the workers complained because “when those hired about the eleventh hour came, each of them received a denarius. Now when those hired first came, they thought they would receive more, but each of them also received a denarius” (Matt 20:9-10).

When those who had worked all day “grumbled at the master of the house, saying, ‘These last worked only one hour, and you have made them equal to us who have borne the burden of the day and the scorching heat” (Matt 20:11-12) and the master responded by saying “Friend, I am doing you no wrong. Did you not agree with me for a denarius? Take what belongs to you and go. I choose to give to this last worker as I give to you. Am I not allowed to do what I choose with what belongs to me? Or do you begrudge my generosity?’ So the last will be first, and the first last” (Matt 20:13-16). Jesus could well mean that even if someone was saved late in their life and others had lived the Christian faith for most of their life both would receive the same wages and since we know that the wages of sin is death but the gift of God is eternal life (Rom 6:23) then the “denarius” could mean that each will receive eternal life. This doesn’t mean that those who do more for Christ will receive the same rewards as those who did little because “He will render to each one according to his works” (Rom 2:6) and the fact is that “we must all appear before the judgment seat of Christ, so that each one may receive what is due for what he has done in the body, whether good or evil” (2nd Cor 5:10). Jesus also says the same thing where “he will reward each person according to what they have done” (Matt 16:27b) and so “each of us will give an account of ourselves to God” (Rom 14:12).

The Factor in Your Rewards

We all will receive different rewards as Paul indicated in 1st Corinthians 3:12-13; “Now if anyone builds on the foundation with gold, silver, precious stones, wood, hay, straw – their work will be shown for what it is, because the Day will bring it to light. It will be revealed with fire, and the fire will test the quality of each person’s work.” The point here is that if we did our works for God alone and for His glory and not to be seen by men, then our works will pass through the fire but we told “don’t do as the hypocrites do–blowing trumpets in the synagogues and streets to call attention to their acts of charity! I tell you the truth, they have received all the reward they will ever get” (Matt 6:2). So “when you give to the needy, do not let your left hand know what your right hand is doing” (Matt 6:3) or in other words, keep that secret between you and God, otherwise you’ve already received your reward.

The eleventh hour could quite possibly be upon this world right now and there is yet time for you to be saved if you’re not already. Paul writes “I tell you, now is the time of God’s favor, now is the day of salvation” (2nd Cor 6:2b) because once Christ returns or if you die before that, you will receive your judgment (Heb 9:27) and it will be too late to cry out to God for mercy and believe on Jesus Christ. Paul’s final warning to you could be “that the hour has come for you to wake from sleep. For salvation is nearer to us now than when we first believed. The night is far gone; the day is at hand. So then let us cast off the works of darkness and put on the armor of light” (Rom 13:11-12).